Israel Is America's Unlikely Ally in the Trade War with China 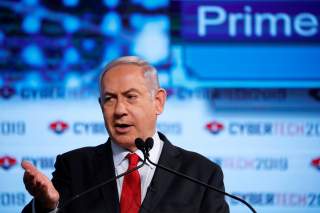 The trade war between the United States and China has grabbed headlines, rattled markets and sparked a heated beltway debate on the future of Sino-American relations. U.S. policy is shifting rapidly, forcing U.S. allies to shift, as well. Now, an unlikely Middle Eastern ally is working overtime to address this challenge: Israel.

The United States and Israel are close allies on issues ranging from Iran to cyber security to the war on terror. But China has periodically been a fly in the ointment. Each time, Israel responded quickly to U.S. concerns. We’re at another such inflection point today, and Israel is once again moving quickly.

In the late 1990s, Washington called out Israel over selling sensitive weapons technologies to China. Israel had agreed to supply China with an advanced PHALCON airborne early warning and control (AEWC) system to the tune of $1 billion. After the Clinton administration threatened to withhold multi-billion dollar aid packages, Israel cancelled the deal. Israel later paid China reparations for scuttling the deal.

The second bout of turbulence occurred in 2005, when Israel planned to upgrade China’s Harpy drone system. In response, the United States temporarily suspended Israel from the F-35 Joint Strike Fighter program. Additionally, the Pentagon called for the resignation of the director general of the Israeli ministry of defense for greenlighting the deal.

With a better grasp of American concerns, Israel passed its 2007 Export Control Law, increasing U.S. oversight over defense and dual-use technology bound for China and elsewhere.

Of course, this mechanism has not stopped China and Israel from doing business altogether. In recent years, China has been particularly interested in the “start-up nation” for its cutting edge tech scene. Tech giants such as Alibaba, Baidu, and Huawei are plowing cash into China-Israel innovation campuses. These campuses seek to spur innovation in artificial intelligence, data science, machine learning, and the internet of things.

Israel has since taken steps to halt Huawei from building 5G network infrastructure in the country, and Huawei phones are just 3 percent of the Israeli market. Israel has vowed to follow the lead of the Five Eyes (United States, UK, Canada, Australia and New Zealand) when it comes to the Chinese tech giant. Israel’s restrictions are actually tougher than those in the UK and Canada, and more in line with Australia and New Zealand.

Tech isn’t China’s only avenue of Foreign Direct Investment, however. China’s state-run companies have won tenders for massive infrastructure deals in recent years. These companies are involved in port construction at Haifa and Ashdod; construction and maintenance of the Tel Aviv light rail system; and more. Beijing sees these infrastructure projects as part of the Belt and Road Initiative, and the broader effort of making China the center of global trade.

U.S. officials have warned Israel, both publicly and privately, about these investments. Haifa is a frequent port call for the U.S. Navy’s Sixth Fleet. But the actual intelligence risks involved remain unclear. Israeli officials indicate that the two sides have now reached an understanding, but no specifics have been provided.

Until recently, Israel lacked the bureaucracy to mitigate the risks associated with Chinese investment. Indeed, Israel does not have an analog to the Committee on Foreign Investment in the United States (CFIUS). The Israelis are now setting up their own investment oversight committee to weigh the benefits of foreign investment while mitigating possible national-security risks.

There will undoubtedly be some challenges ahead, as Israel looks to disentangle from some of its Chinese business initiatives, while maintaining course with others. Fortunately, the United States and Israel have a good relationship. When all is said and done, what Israel does now will serve as a roadmap for other U.S. allies navigating the rising tensions between Beijing and Washington.

Jonathan Schanzer is senior vice president at Foundation for Defense of Democracies. Owen Helman is a master of arts candidate at the Elliott School of International Affairs.