A Long-Term Trade War Is a Lose-Lose Scenario 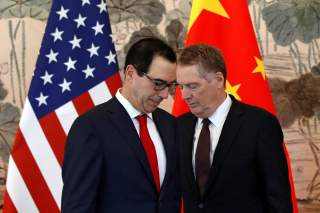 The economic pain of the trade war with China has caused President Donald Trump to put a partial pause on a planned increase in tariffs. On August 13, the U.S. administration announced that the new 10 percent tariffs on certain consumer goods would be delayed until December 15 to spare American consumers during the holiday season. As a result, Americans won’t have to worry as much about if they can afford toys, laptops, phones or shoes for Christmas—for now.

While this pause is good news, it is still a long way from restoring the economic truce Trump and Chinese President Xi Jinping reached during the G20 summit in June. Although the negotiators for both countries met again recently, Trump wanted to impose 10 percent tariffs on $300 billion worth of Chinese imports by September 1. Tuesday’s announcement offers some reprieve and may also dampen China’s retaliation.

This trade war is undermining America’s economic prosperity and could damage U.S. security, affecting $737.1 billion worth of goods and services that citizens of the two most powerful countries in the world rely on daily. Washington should negotiate a concrete cease-fire before each side falls into an escalation spiral, for economic prosperity—the foundation of national power—is a vital U.S. interest.

Though the administration has cast them as a punishment for China, U.S. tariffs make everything more expensive for average Americans who need to make ends meet. But the costs of the trade war aren’t only economic. This dispute also has real political and security costs. A weaker economy means less tax revenue to spend on vital domestic programs and on maintaining America’s world-class military.

Every single American, especially the poorest, benefit when their dollars go further, allowing them to afford their daily necessities. That is why millions of Americans rely on cheaper Chinese goods at Walmart. After December 15, Trump’s new tariffs will raise the price of iPhones, children’s clothing, computers, games, appliances, televisions, and other goods. Already aluminum and steel have been impacted by past measures, and economists are worried about the trade war causing slower economic growth or even a recession.

Moreover, China has tailored its tariffs to hit U.S. farm exports from swing states like Iowa, a dangerous foreign attempt to influence American elections. In response, the president announced $16 billion in agricultural aid to reassure farmers and proclaimed, “Under my administration we will always protect and defend our great American patriot farmer.”

But no political leader can shield Americans and businesses from the laws of economic reality.

A March 2019 study by the National Bureau of Economic Research found all of Trump’s tariffs, not just the trade war with China, have cost Americans $68.8 billion annually by making imports more expensive. Furthermore, research by Princeton University discovered that at the end of 2018, Trump’s trade wars against other countries had cut monthly U.S. real income by $1.4 billion. This weakens America.

A less visible risk of this trade war is the real possibility that China could retaliate by refusing to sell American companies rare earth minerals. Those minerals are important because small quantities are necessary for  high-tech products such as pacemakers, missiles, cars, smartphones, planes and ships.

Beijing controls most of the world’s rare earth supply, including 85 percent of processing and 70 percent of production. Washington, meanwhile, only has about 5 percent of a year’s worth of reserves saved for an emergency.

On the other hand, to be effective, Beijing would also have to ban the export of other goods that use rare earths to America as well. This will be harder as it would cause a massive disruption for China and the United States could purchase such technological products elsewhere.

It remains to be seen if China would take the dramatic step of cutting trying to off rare earths, but there are signs it is considering such an option. Beijing’s leaders are attending their secretive, annual meeting at the Beidaihe resort, where they are probably considering additional tariffs hikes of their own and whether to return to the negotiating table. Regardless of what they decide, a continuing trade war would hurt America.

America would be in for a world of economic pain should the trade war drag on for the indefinite future. It is true that China is weaker and may suffer more in the short-run from an economic conflict. But so what? Washington should guard America’s economic prosperity and military capabilities. Hiking tariffs that cost average Americans lots of money while also reducing U.S. tax revenue is not a good strategy. And if a solution isn’t found soon, then it could get much worse.

Rather than attempting to harm China by harming America, U.S. policy should maximize America’s economic prosperity—its national strength—and profit as it outcompetes China.

John Dale Grover is an assistant managing editor for the National Interest. He is also a fellow at Defense Priorities. His articles have appeared in Forbes, Defense One, The Hill, Real Clear Defense, and Fox News.