Israel and Poland Must Look Forward, Not Backward 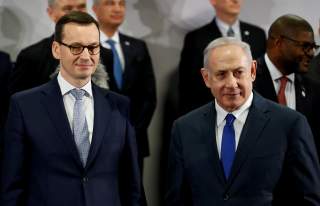 Polish-Jewish relations are as complex as they are ancient and painful. During much of the Middle Ages, when England, France and various German statelets expelled their Jewish communities, it was Poland, or the Commonwealth of Poland-Lithuania, that took them in. On the other hand, pogroms against Jews became increasingly commonplace after Czarist Russia absorbed eastern Poland in the third and final partition of that country in 1795. In the aftermath of the First World War, the Allies forced the newly independent Polish government to agree to provide special protections to its vulnerable minorities—the so-called Minorities Treaty—especially the Jewish community, which comprised some ten percent of the new state’s population (and accounted for 56 percent of the country’s doctors and about a third of its lawyers and other professionals).

The pogroms did not stop, however. Jews were attacked on the streets and in the universities. Their shops were often boycotted. Moreover, Poland renounced the Minorities Agreement in 1934 when General Jozef Pilsudski signed a non-aggression pact with Germany. Attacks on Jews increased sharply as did economic boycotts. Full-scale pogroms took place in various towns until 1938. At the same time, the government passed increasingly onerous restrictions on Jews: they were offered a very limited number of places at universities under the numerus clausus; if they did attend, they were forced to stand in the back of the lecture hall. They could not hold government jobs, other than serve in the seats reserved for them in the Polish Sejm (Parliament).

The Holocaust resulted in the extermination of Europe’s largest Jewish community, some three million souls. The most notorious concentration and extermination camps, such as Auschwitz-Birkenau, were to be found in Poland. Thousands of Poles cooperated with the Nazis in the destruction of the country’s Jewish population.

Even the Allied victory in 1945 did not stop outbreaks of violence against Jews. The worst was the Kielce pogrom on July 4, 1946, against Jews seeking to return to their former homes. That pogrom resulted in the death of forty-two Jews, with at least an equal number wounded. Once the Communists took over the Polish government, persecution of Jews took on a subtler form. Much of the remaining—and tiny—Jewish community was targeted for expulsion in 1968 as a result of a nominally anti-Zionist campaign waged by the minister of internal affairs, General Mieczysław Moczar, with the support of Wladyslaw Gomulka, Poland’s communist strongman.

There was another side to Polish-Jewish relations from the seventeenth century onward, however. Polish Jews generally lived peacefully side by side with Catholic Poles. Both suffered during the brutal Zaporozhian Cossack uprising of 1648-49, led by Bogdan Chmielnicki. Hundreds of thousands of Polish Jews were massacred, but so were at least an equal number of Poles. Perhaps as many as twice as many Poles than Jews died in World War II, many in Nazi slave labor camps, but others in concentration camps. The Auschwitz camp exhibits not only the mounds of Jewish shoes, glasses, teeth and skin turned into lampshades, but also the fate of a significant number of Poles as well.

Many thousands of Poles risked their lives to hide their Jewish neighbors. Notably, a priest named Karel Josef Wojtyla helped save a young boy named Yisrael Meir; the two remained friends for life, when the priest became Pope John Paul II and the boy, Yisrael Meir Lau, became Chief Rabbi of Israel. Finally, Polish General Wladyslaw Anders not only recruited Jews to his anti-Nazi army, but permitted them to remain in Palestine as he passed through that country. One of them was the future Israeli prime minister Menachem Begin.

All of the foregoing is by way of explaining the sensitivity surrounding the latest Israeli-Polish flap, which has resulted in the cancellation of Polish prime minister Mateusz Morawiecki’s refusal to attend a Visegrad Group summit in Jerusalem on February 18-19. The Polish government was furious that Israeli prime minister Binyamin Netanyahu was quoted at the Munich Security Conference as saying that “the Poles cooperated with the Nazis” in the Holocaust, though Netanyahu subsequently insisted that he had been misquoted, saying he never used the word “the.” To make matters worse for the Poles, who felt that to accommodate Israeli and world Jewish concerns they had modified their 2018 Anti-Defamation Law (which penalizes those who blame the Polish nation for collaborating with the Nazis), acting Israeli foreign minister Israel Katz quoted the late Prime Minister Yitzhak Shamir, that “Poles sucked anti-Semitism with their mothers’ milk.” Shamir’s hatred of Poles was purely emotional and personal: as he told me, when his father went to the home of his neighbor to seek protection from the Nazis, the man blew his head off with a shotgun. But Katz was born in 1955; it is not at all clear that his remark was driven by family history. All it did was to pick at the scabs of an already fragile relationship.

Less than six months after a non-Communist took control of Poland’s government for the first time in four decades, it restored relations with Israel. Since then, the two countries have become quite close politically, militarily and economically, and the Jewish community, while small, has witnessed a true revival. Certainly, the Anti-Defamation law was pushed in the Sejm by some members who have shown little sympathy for the Jews in the 1940s or today. Nevertheless, it is a shame that demagogues in both countries are doing their best to wreck Israeli-Polish relations. Katz has only been acting foreign minister for a very short while: he not only should apologize for his remarks, but he also should be exceedingly careful about what he says about Poland in the weeks and months to come.