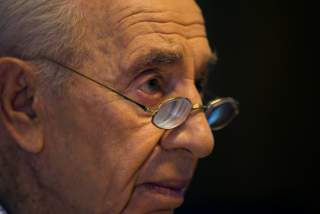 SHIMON PERES, who was present at the creation of the state of Israel and helped to determine its fortune for seven decades, was the author of no fewer than ten books, five of which, including his valedictory No Room for Small Dreams: Courage, Imagination, and the Making of Modern Israel, were memoirs. This, his final volume, was completed only days before his death at the age of ninety-three in September 2016. The book is actually an extended essay; its subtitle hints at Peres’s sense of self and how he wishes posterity to remember him. It is about the man’s courage, and imagination, and his outsized role both in creation of the Jewish state and providing for its security. This, perhaps, should come as no surprise. As the veteran journalist Akiva Eldar wrote more than a decade ago, Peres “always nurtured an inclination for historical grandeur.”

Peres, who was born in 1923, grew up in Vishneva, a shtetl in what is now Belarus, near the Lithuanian border, but which was then on Polish territory. Jews accounted for about two-thirds of its population of less than three thousand. The Persky (or Perski) family, as they were known at the time, had lived in Vishneva for several generations. Some of their relatives had moved to America; one of them, who claimed to be Peres’s cousin, was a young woman named Betty Joan Perske, better known as Lauren Bacall. She claimed to be Peres’s first cousin, though Peres repeatedly asserted that he was unsure of the supposed family connection with the famous beauty.

Jews from the area where the Peres family lived were called “Litvaks,” presumably because the region was once part of the Grand Duchy of Lithuania. Litvaks had the reputation of being rather stingy, dry, generally humorless intellectuals. Peres writes that he inherited his love of books from his mother, who loved to read and had trained as a librarian; he certainly cultivated the image of a cosmopolitan intellectual. He was a polyglot: the family spoke Yiddish, Hebrew and Russian at home, and he later learned both English and French. There was nothing dry about him, however. He possessed a sharp wit, and his book reflects his love of the bon mot. Yet he seems to have been something of a loner as a youngster; perhaps even then he was seen as someone who was something of a show-off. He acknowledges that his long-winded “fully formed addresses about the nature of Zionism” turned off his schoolmates: “It made me something of an outcast, the one so clearly unlike the others.” He adds, “What I was, in fact, was what I have remained: at ninety-three, I am still that curious boy, enamored of hard questions, eager to dream, and unbowed by the doubt of others.” His long-time antagonist, the former ambassador and defense minister Moshe Arens, characterized him in similar, but far less flattering terms: “Peres was . . . supremely confident in his own judgment, having little respect for the opinion of others. His blustering overconfidence had led him at times to recklessness in word and on occasion even in deed.”

Peres mentions no childhood friend by name. Indeed, almost all of the names that appear throughout the book are what might be called “boldface.” Of these, there are many; it would have been helpful if the book had an index.

The Peres family was not poor. The elder Peres, like his father before him, was a lumber merchant. But it was his maternal grandfather, Rabbi Zvi Meltzer, whom the young boy adored, and whose influence led him to be more scrupulous about Jewish practice than his parents were. Peres claims that his mother was “brilliant” while his rabbinic grandfather studied at “the finest yeshiva in Europe.” He does not identify the institution, however, perhaps because others might not consider that particular institution as the Harvard of the yeshiva world, thereby implicitly calling into question his thinly disguised claim to his own inherited brilliance.

The Pereses were Zionists, inspired by Theodor Herzl’s vision of a Jewish national homeland as a solution to the ubiquitous anti-Semitism that confronted Jews in central and eastern Europe. Poland in particular was a difficult place for Jews in the 1920s and 1930s. Universities applied a numerus clausus to limit the number of Jewish students; those who successfully matriculated were forced to stand in the rear of classes. Jewish businesses also suffered. Faced with the destruction of his business due to the government’s imposition of crushing taxes, the elder Peres moved to Mandatory Palestine in 1932 and brought his family there two years later. They arrived in the second year of a major wave of Jewish immigration, called the Fifth Aliyah, that accelerated with the rise of Adolf Hitler in Germany. Among the Litvaks emigrating during that period was a young dropout from the University of Warsaw named Yitzhak Yezernitsky, who changed his name to Shamir, just as the family Persky changed its name to Peres upon arrival in Palestine.

YOUNG SHIMON Peres, as he was now called, was eleven years old when he first set foot in the Promised Land. Within a few years the family he left behind in Poland, including his beloved grandfather, like the rest of the Jews in the village, were all murdered by the Nazis. Shamir’s family suffered a similar fate: as he told me, and related to many others, when his father sought refuge at the home of a neighbor he had known from childhood, the man responded by killing him with a shotgun blast. Yet Peres never seemed to harbor the same bitterness against Poles that ate at Shamir for the rest of his life. As he told the Polish senate in 2008, “The remnants of the death camps on Poland’s land will serve as a pillar of fire in our collective historical memory,” but “the new Poland will bear no resemblance to the occupied one.”

Peres quickly rose to prominence as one of David Ben-Gurion’s blue-eyed boys. He became active in socialist politics as a teenager, and it was then that he caught the eye of the man would become Israel’s first and (until Benjamin Netanyahu) longest-serving prime minister. Peres, whose political reputation always suffered because he never served in the military, Israel’s most respected profession, was recruited by Ben-Gurion to the Haganah, the precursor to the Israel Defense Force (IDF), in 1947, a year before the state came into being. Then and thereafter, however, whenever he worked within the military establishment, it was from behind a desk, not on the battlefield. Only twenty-four when he was assigned to the Haganah, his rise under Ben-Gurion’s tutelage was meteoric: head of the naval service in 1948–49, director general of Israel’s defense mission to the United States for the following three years and then, at the tender age of thirty, director general of the Ministry of Defense.

Never a shrinking violet, and resented by older colleagues such as Levi Eshkol and Golda Meir, both future Labor prime ministers, Peres was nevertheless especially adept at keeping secrets and conducting secret negotiations, at times without the knowledge of his colleagues and superiors. His work for the Haganah consisted of acquiring weapons for its fighters from anywhere they might be located, and to do so in haste and, if necessary, in secrecy. He describes his task in rather grandiloquent terms: “Days earlier,” he wrote in his final memoir,

“I had been milking cows on a kibbutz. Now I was being thrown into one of the most dramatic periods of my life. I would build friendships with arms dealers and partnerships with arms smugglers. I would undertake secret missions using fake passports, working in the shadows to purchase as much as I could.”

Peres reveled in his mission, and he was good at it. It was his success at obtaining sorely needed weapons and ammunition from Czechoslovakia in 1947–48, as well as his desire to complete an education that had ended before receiving his high-school diploma, that led Ben-Gurion to approve his transfer to New York to lead Israel’s defense mission in the United States. Peres’s primary task was to evade the American embargo on weapons sales to Israel, and he succeeded in doing so with the help of a former U.S. Army Air Force pilot named Al Schwimmer. Schwimmer, who had piloted Israeli aircraft during the new country’s War of Independence, had returned to his native California, where he rented a hangar and secretly ran a maintenance facility for Israeli aircraft. Peres would direct to Schwimmer whatever aircraft, or parts of aircraft, he was able to get his hands on. The American would then reconstruct the planes and secretly fly them to Israel.

But Peres had grander ideas. He envisaged the creation of a domestic Israeli military industry that would not only support the needs of the fledgling state, but ultimately export its products worldwide. Peres recognized that he needed Schwimmer to realize his dream, and that however useful the American was in the United States, he would be of far greater service to the Jewish state if he moved there. Peres, by now director general of the defense ministry, confronted opposition to his plan from Israel’s military establishment, ministers, economists and outside experts—he recalls that one shouted at him, “Our only industry is bicycles!” He went ahead anyway, raising money for his project from private sources when he could not obtain sufficient funds from the finance ministry. He then ensconced Schwimmer as president of Israel’s new domestic military maintenance facility, called Bedek, the forerunner of what has since become the powerhouse known as Israel Aircraft Industries.