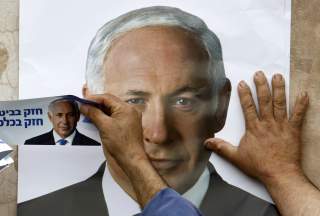 The Lebanese fighter heard the name of a Shi’a Muslim saint over the radio. Then, his face out of frame, he fired an anti-tank round into Israel.

The widely-circulated propaganda video is only one of the issues on Israeli prime minister Benjamin “Bibi” Netanyahu’s plate this week. After publicly escalating against Israel’s enemies across the region last month, Netanyahu has had to carefully manage the cycle of responses and counter-responses. And he’s also facing a duo of internal issues: a showdown with the semi-autonomous Palestinian government and a looming corruption investigation.

With snap elections scheduled for September 17, Netanyahu is in a life-and-death political struggle.

“So far [the clashes have had] no effect. The election is a public referendum on Netanyahu,” wrote Aluf Benn, editor in chief of Ha’aretz, in an email to the National Interest. Benn named the prime minister’s behavior, accusations of corruption, and “tribal loyalties” as the main focus of the election.

A recent New York Times investigation revealed that Netanyahu had clashed with then-chief of staff Gen. Benny Gantz, now the leading opposition candidate, over a plan to bomb Iranian nuclear facilities. With Gantz gone, the Netanyahu government is reportedly “considering the possibility of a unilateral strike against Iran.” But last week, Israel faced the possibility of fighting Iran’s allies on its own soil.

On September 1, the Lebanese political party and militia Hezbollah fired anti-tank rounds across the border with Israel, striking an armored personnel carrier near the town of Avivim. The Israeli military responded with artillery fire and airstrikes in south Lebanon, and ordered towns along the border to prepare their own air raid shelters.

“We have no casualties—not even a scratch,” Netanyahu told Israeli reporters. “I have given instructions to be prepared for any scenario, and we will decide on what's next depending on how things develop.”

“It’s a serious incident in violation of Security Council Resolution 1701,” Tenenti told the National Interest. “In a way, it was directed to undermine the situation in the area of operations. Luckily, we were able to, together with the parties, deescalate the situation and restore calm in the area.”

“The head of mission and force commander, Major General [Stafano] Del Col, has been fully and continuously engaged with the parties on the Lebanese side and the Israeli side to ensure that stability is maintained and also to ensure that there is no space for misunderstanding and escalation of tensions,” he added. “The cessation of hostilities has been restored.”

“At least for now, both sides—Hezbollah and Israel—want to stick to this process of testing each other’s red lines through a calibrated strategy,” said Randa Slim, founding director of the Initiative for Track II Dialogues at the Middle East Institute.

The clash seems to make good on Hezbollah’s prior threats to retaliate for Israel’s attacks in late August. Two weeks ago, Israel killed two Hezbollah members in Syria, accusing them of planning a drone attack on Israelis in the disputed Golan Heights. Israeli drones then allegedly attacked a Hezbollah headquarters in Beirut.

Hassan Nasrallah, the leader of Hezbollah, threatened an even wider response in a speech after the September 1 clashes.

But for now, the battle has only escalated into a war of words, as both sides claim to be the victor.

Hezbollah claimed via its affiliate TV station to have killed or injured everyone on board the Israeli vehicle. Israel brushed off the injured soldiers caught on tape entering an air ambulance as decoys wearing fake blood.

Hezbollah responded with video purporting to show one armored car out of a group of vehicles going up in smoke. “The decoys placed inside the military vehicles didn’t mislead the Resistance in choosing the target of its response,” the narrator of the video claimed.

Israeli media then aired alleged footage from near the attack site, showing an armored vehicle emerging from a cloud of smoke with minimal damage.

The conflicting versions of events may leave both sides’ constituents unsatisfied.

“The alternative narrative of what happened, coming from [Hezbollah] in the shape of the video released [September 2], creates doubts regarding Netanyahu’s perfect story of victory,” said Muhammad Darawshe, director of the Center for a Shared Society at Givat Haviva Institute. Darawshe used to direct the United Arab List, a party representing Arab citizens of Israel in the Knesset, the Israeli parliament.

“The majority of Hezbollah's base resides in the south of Lebanon,” Slim told the National Interest. “A war with Israel will likely lead to the country’s economic collapse. And that is already adding to a series of economic woes that Hezbollah has been suffering from, as well as Hezbollah’s support base, due to U.S. sanctions on Iran and Hezbollah.”

The most recent clash took place on the second day of Muharram, a holy month for Shia Muslims. The first ten days of Muharram are filled with highly emotional ceremonies commemorating the martyrdom of the saint Hossein ibn Ali and several of his companions in the first century of Islam.

“For Shias, the story of Imam Hossein and [the tenth of Muharram] is chiefly that ‘truth’ or what is ‘just’ or ‘right’ must never be abandoned, even as the cost of great sacrifice and death,” said Sina Toossi, research associate at the National Iranian-American Council. “Shias view Imam Hossein's death as a tragedy, but also as a martyrdom that should be emulated.”

“[T]he significance of Hossein’s struggle is as a powerful ideological force among Hezbollah’s constituent and fighters,” Toossi continued. “As such, the group likely faces bottom-up pressure to respond to Israeli strikes and its supporters are likely to endure a high degree of pain and hardship in the event of any conflict.”

The clashes were reminiscent of July 2006, when a cross-border Hezbollah raid unexpectedly erupted into a month-long war. The devastating combat in southern Lebanon killed 121 Israeli soldiers, several hundred Hezbollah fighters, and around a thousand Lebanese civilians. Hezbollah’s retaliatory missile campaign killed 46 civilians inside Israel, and displaced hundreds of thousands of Israelis.

Israel believes that the Syrian Civil War, where Hezbollah is backing Bashar al-Assad’s forces, has given Iran cover to arm Hezbollah with more long-range missiles. This fear has driven Israel to strike at Hezbollah and other Iranian allies across the Middle East in recent weeks.

On Tuesday, the Israeli military sent a thinly-veiled warning to Hezbollah, showing off satellite images of an alleged precision missile factory in eastern Lebanon.

Israel is also facing potential problems in the Palestinian territories, which it captured in a 1967 war. The future status of the territories is a major issue in Israeli politics.

On August 30, the Palestinian Authority (PA) signaled that it would try to revoke part of the Oslo Accords. Under the 1993 agreement, the PA governs some of the largest Arab-majority cities and towns in the territories, while Israeli military authorities control a tract of rural lands and Israeli civilian settlements called Area C.

“I've seen chatter on Facebook mentioning that, and then I went to the municipality to make sure that this is something real, and not fake, and it was there,” said Hassan Muammer, a resident of the Area C village of Battir. “Until now, we haven't seen any immediate effect. On the contrary, we've seen Israeli immediate effects on the ground.”

Muammer told the National Interest on September 6 that Israelis had “just started” constructing a new “outpost” in Battir.

“The Palestinian Authority feels marginal in the discourse regarding the deal of the century and wants to reinstate itself as the negotiations partner,” said Darawshe, referring to the U.S.-backed Deal of the Century peace proposal. “I believe they are relaying the message mainly to the United States.”

“But clearly the PA is also angry at the unilateral steps taken by the Israeli government, which they view as creeping annexation of Area C, which will reduce the amount of land left for a future Palestinian State to an amount that will not sustain and answer the needs of such a state,” he told the National Interest.