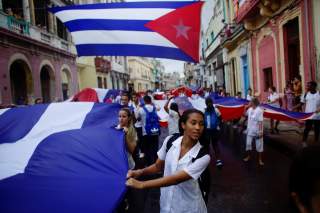 Perez argued that Cuba “won’t get dramatic change at once.” Instead, he predicted change “more as gradual evolution” with a “transition toward a different society.” The process “will necessarily take some time.” Washington’s policy should be “to nurture this process.”

Further complicating the U.S.-Cuban relationship is the possible sonic attack on American diplomats, which caused Washington to essentially empty its embassy and shift visa operations successively to Colombia and Guyana. U.S. intelligence figures the Cuban government was not to blame—which makes sense, since it negotiated the opening to America. Russia has been suspected, but Moscow would risk much launching such an operation in Cuba. Unfortunately, the administration appeared to treat the controversy as an opportunity to ratchet up pressure on Havana, again mostly hurting the Cuban people.

Of course, it will be best when the Cuban dictatorship disappears. But the president’s action is the triumph of ideological blindness over painful experience. If nearly sixty years of embargo and other sanctions won’t create democracy on the island, his arbitrary tightening won’t do so.

Far better to send more Americans, more money, more goods, and more opportunities to Cuba. More Western employment and contact would spread the virus of liberty. Amnesty International’s Marselha Goncolves Margerin argued that “increased political dialogue, travel, and trade between the United States and Cuba is fundamental to advancing human rights.” The embargo should be lifted entirely, though any relaxation would be a move in the right direction. Particularly useful would be allowing Americans to travel freely to Cuba.

That wouldn’t guarantee change, of course, but President Obama’s promise of a different future greatly unsettled the Cuban government. The latter’s repressive response demonstrated the regime’s weakness, not strength. Washington also should look for practical areas where the two governments can work together for mutual advantage. Geoff Thale and Marguerite Rose Jimenez of the Washington office on Latin America noted, “While cooperation has survived during periods of great hostility, it has thrived during periods of increased engagement.”

“Just about anything can go wrong in a country like Cuba,” one person told me. So true, but that is to be expected. As a serious governing philosophy, communism is dead in Cuba. Observed Feinberg: “Over six decades, the vanguard party has become the rearguard party.” Those leaders serious about the island’s future have begun to consider a freer way forward. Reformers looked to the U.S. and lauded Obama’s strategy. None had anything positive to say about his successor.

“We need the Americans back,” one businessman desperately exclaimed. De la Rosa asked me to let people in Washington “know they are hurting us. They are hurting common people.” And empowering opponents of change in Havana. Alas, the president continues to treat Cuba as a political issue, important only because of its impact on the next election. I found many Cubans enormously frustrated by the refusal of American policymakers to look beyond the exile community to those living on the island.

There may be no better test of a public policy than the more than half-century U.S. embargo on Cuba. A foreigner living in Cuba complained of “magical thinking in Miami” which contends that “this time we are almost there” in overthrowing the communist regime. But President Trump knows better. He broke with precedent to engage North Korea. He should offer Cuba the opportunity to join the rest of the world, making political gains as well as economic benefits likely.