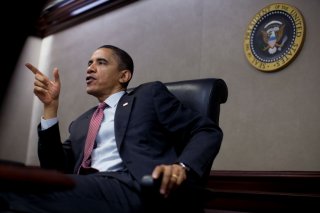 “Radical Islamic terrorism,” the phrase Jeb Bush repeated over and over again in his speech at the Citadel, is not found in the Obama administration’s vocabulary. Nor, for that matter, is a military buildup, which Bush called for, with considerable force backed up by detail. His speech made clear that he would follow in the path that Ronald Reagan trod—namely, rebuilding the military after a disastrous eight years, yet doing so without committing those in uniform to nation-building fantasies that they cannot possibly fulfill. Nor did Bush advocate America’s involvement in every conflict around the globe; he explicitly rejected the notion that the United States was the world’s policeman.

On the other hand, Bush made no bones about what was needed to restore the military to the preeminence befitting the world’s greatest power. He called for an increase in both Army and Marine force levels, a Navy that would be able to operate simultaneously in the seas around Europe, the Middle East and East Asia, additional support for Special Operations Forces, and a modernized Air Force, especially the bomber force, that reflected twenty-first century advances in military technology. He asserted the need for additional funding for missile defense and made it clear that he was dissatisfied with the pace of the administration’s efforts to protect American business, as well as the government, from the daily cyber attacks emanating from enemies abroad.

Bush did not call for a spending spree on defense, however. Indeed, he identified an urgent need for acquisition and personnel reform. In particular, he called for reducing the DoD’s bloated civil service, which has grown by leaps and bounds since 2000, without resulting in the slightest improvement in the efficiency of the Department’s operations.

Bush spent a significant portion of his speech lambasting the administration’s feckless Syrian policy. His prescriptions for defeating ISIS include a ramped-up air campaign, more American troops on the ground and aid to the Kurdish fighters who have proved most effective in combatting ISIS in both Syria and Iraq. All told, his prescription was for true American leadership—in front, not behind—which would act as a magnet for other allies to join the fight against ISIS in a serious way. Most notably, the Arab states who have the most to fear from ISIS would be far more likely to contribute their own forces to the fight if they saw that America truly had “skin in the game.”

In essence, Bush threw down a gauntlet before the Obama administration as it enters its final year in office, while at the same time demonstrating why Donald Trump and Ben Carson in particular simply are not up to the job of “Leader of the Free World.” Trump has offered little except catch phrases, meaningless platitudes and the promise that he will have the best people advising him as he makes decisions. Carson has not even said that much. Yet a president must do more than rely on advisors, however capable they might be. What would Trump do if, as is so often the case, he is presented by conflicting advice at National Security Council meetings? “You’re fired” works only on reality TV; it is unlikely to carry much weight with the leaders of China and Russia or, for that matter, adversaries like Iran and North Korea.

Presidents do not need to know the capital of every country in the world; what they must possess are the leadership, determination, consistency and credibility to win the confidence of allies and friends, and to cow adversaries. That is not the case today. It is critical that our next president possess those traits, if America is to resume its historic, unique and indeed exceptional role on the international stage, one that no other country can possibly fulfill.