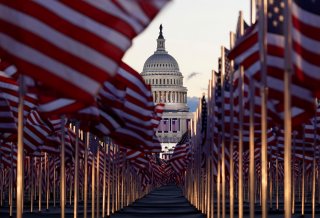 The Biden administration has announced sanctions on Russian officials and entities in response to the poisoning and then arrest of Alexei Navalny. In so doing, administration officials have noted that this the first wave of U.S. responses to perceived Russian malign activity, with further measures likely to be announced in coming weeks. At the same time, the Biden team, while making clear that there will be no attempts at a reset of relations with Moscow, is also looking for opportunities to collaborate in areas of shared concern.

The first new set of Russia sanctions promulgated by the Biden administration (given that a set of Nord Stream II sanctions announced earlier this year were a reiteration of measures taken by the Trump administration) can best be described as a satisficing compromise. As with the measures announced in relation to the death of Jamal Khashoggi, the Russian measures attempt to balance contradictory and competing U.S. interests.

From day one, the Biden administration wanted to differentiate its approach to Russia, certainly from its immediate predecessor (perceived as over-solicitous of Vladimir Putin) but also more indirectly from efforts by the Bush and Obama administrations, at the beginnings of their tenure, to find ways to develop a better working relationship with the Kremlin. These measures were meant to lay down a marker that this administration would not hesitate to “push back” against actions taken by Russia that Washington found objectionable.

But the sanction measures suggest that the Biden national security team does not have a unified position on two critical questions. The first is what might be termed the “declinist” question: is Russia under its current management experiencing a rapid and perhaps permanent decline in the sources of its national power (especially economic) as well as an erosion in the legitimacy of the regime itself? The second is whether the risk of foreclosing Russian support for U.S. initiatives (Iran and North Korea) is worth taking stronger action against Moscow. For those who hold both to the “declinist” position and who do not believe Russia is capable or willing of providing real assistance to the United States—a stance many members of Congress of both parties hold as one of the last remaining truly bipartisan points of consensus—then the measures announced by the Biden administration are too little and not strong enough. Yet it seems that President Joe Biden’s own team, as much as it may distrust and dislike the Putin government, are not yet prepared to gamble that Putin’s Russia is on its last legs or that Moscow cannot still raise prohibitive costs should it decided to oppose U.S. initiatives.

Alongside these debates, there is the question of how U.S. action towards Moscow affects two more critical relationships for Washington: the ones with Berlin and Beijing. Germany’s Chancellor Angela Merkel and her government are not entirely pleased with the direction that Putin’s Russia has taken, but Merkel has also clearly signaled to Washington that Berlin will not follow where America leads on this matter—and that Germany (and by extension Europe) have equities with Russia that they do not want the United States to ignore. It was perhaps significant that, at least when it came to the matter of Navalny, that the Biden administration chose to match—and not exceed—the measures taken by the European Union.

And if, as some within the Biden national security apparatus suggest, the ultimate strategic competition is with China, there is concern that too much of a focus on Russia in the short term will allow China to continue to consolidate its position. Moreover, as the relative balances of power continue to tilt more in Beijing’s favor, this may create an opportunity to encourage Moscow to reconsider the depths of its strategic partnership with China. We can hear echoes with earlier approaches by former President Barack Obama’s team to ensure that, in any measures imposed on Moscow, there were clear “offramps” that could provide opportunities for normalization. And as the Biden administration attempts to forge a strong Euro-Atlantic consensus on China, this may require a compromise with Germany over Russia policy in order to get its commitment to join Washington in stronger efforts vis-a-vis Berlin.

Biden can plausibly claim that he has answered Russian actions and upheld U.S. values by imposing costs on the Putin government—but his critics will point to the current set of sanctions largely as a symbolic, box-checking exercise. Russia’s  Foreign Minister Sergei Lavrov has responded to U.S. actions by threatening reprisals and warning that U.S.-Russia relations will further deteriorate—but the sanctions do not fatally strike at any key Russian priorities. Rhetoric and reality do not quite overlap, but we will have to see in what direction the Biden team moves on Russia in the coming months.

Why Poisoned Dissident Alexei Navalny Stands Out in Russian Politics