Is Joe Biden the 2021 Version of Jimmy Carter? 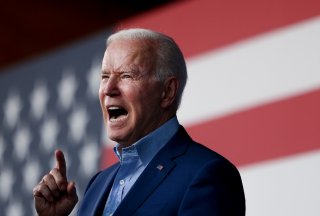 The photography club snapped a shot of a massive billboard opposite the entrance to the home post of the 82nd Airborne Division. The message was the crowning glory of the Jimmy Carter years—IRAN, LET OUR PEOPLE GO. That is what we had become, a nation reduced to begging Tehran’s theocratic fanatics to release U.S. diplomats and soldiers.

In the 1970s, the world assumed that the United States was on an inevitable decline riven by problems at home and indecisiveness abroad. The crime was out of control. Oil prices had tripled, and gas lines were everywhere. Americans learned a new word: stagflation.

The defense budget tanked; there was no fuel for vehicles and no money for training. Overseas, the Soviets invaded Afghanistan, and Cuban proxies were rampaging through southern Africa. Meanwhile, Jimmy Carter apologized on behalf of America. Some academics assessed as they do now that America had entered the Thucydides trap. In this trap, America played the role of Athens and the Soviet Union played the role of Sparta.

Then-Senator Joe Biden cut his political teeth in this decade of disco and “malaise.” He was on the wrong side of history then and was well on his way to being, as former Secretary of Defense Robert Gates said years later, “wrong about every major national security issue for 40 years.”

It is a small wonder, that the Carter years have returned with a vengeance. Inflation is soaring. So, too, is the number of murders. Oil prices are climbing as the president strikes at the heart of American energy independence, all the while giving the green light for Putin to tie western Europe to a Russian gas pipeline.

Once more, the leader of the free world fumbles opportunities to cooperate with allies and enables our adversaries in Beijing, Moscow, and Tehran.

Secretary of Defense Lloyd Austin was sent to Asia to reassure allies with memories of Obama-era indifference toward the Pacific region that Biden is cut from a different cloth. Yet even as Austin offered these assurances, the Biden administration was proposing a flat defense budget, one insufficient even to maintain purchasing power. The incongruity has not been lost on nations looking to stand together with Washington to prevent Chinese military dominance of the Pacific region.

The same attitude applies to the Middle East where Arab states in 2020 buried age-old animosities toward Israel so as to stand together against the mullahs in Tehran. Throwing away the years of progress encapsulated by the Abraham Accords, the Biden White House has returned to the Obama-era appeasement of Iran and its proxies.

Even in Europe, the message is one of retreat. The Trump administration halted Russian aggression in Ukraine by providing Kiev with weapons able to kill Russian president Vladimir Putin’s tanks, helicopters and planes. The Biden-Harris administration unilaterally choked off the flow of military supplies to Ukraine, in the hope that Moscow would reciprocate. Instead, Putin has moved tens of thousands of troops to the border opposite Ukraine and continues to wage war on the cyber commons vital to American security.

People in London, which is one of America’s most important allies, were left flabbergasted by a president who could not comprehend that Northern Ireland was a constituent part of the United Kingdom, not a province of the Irish Republic. The Canadians are reeling from the loss of thousands of oil and gas jobs as America relinquished its energy partnership with the stroke of a presidential pen. The president of the French Republic declared that the woke presidency of Joe Biden is a threat to the very soul of the French nation.

All of this means that America is now led by those who believe they exist to manage national decline, not lead the world. Secretary of State Antony Blinken has asked the United Nations Human Rights Council, a forum for world thuggery, to investigate racism in America. That means unleashing council members China, Russia, and Cuba to vilify the United States with Foggy Bottom’s blessing.

This is not new ground for Blinken. In March, the Chinese foreign minister hammered him by simply echoing Biden’s own woke critique of America. The Wall Street Journal posited that the Chinese made clear that “after the Trump years, Beijing wants a return to the policy of Obama accommodation to China’s global advances.” Blinken could only respond with faculty lounge pieties about America’s “imperfections.”

In April, Biden’s ambassador to the United Nations, Laura Thomas-Greenfield, embarrassed the United States by denouncing her own nation before the UN Human Rights Council, declaring that “the original sin of slavery weaved white supremacy into our founding documents and principles.”

The inability of these top officials to be anything but defensive about their own country sets the tone for what to expect in the next four years. How can America cope with a rampant China when her own leaders do not believe that the country is worth defending, even rhetorically? If they will not stand for a nation grounded in the universal principles of human dignity and individual freedom, then where will they stand?

Let us be clear about what is at stake. China and its junior partners, Russia and Iran, seek nothing less than the overthrow of the United States as the world’s most powerful country with the Middle Kingdom being at the center of a new world order.

Carter famously said that the Soviet invasion of Afghanistan revealed what was at the heart of Moscow’s ambitions. He immediately put into production the B-1 bomber, the Abrams Tank and the Minuteman 3—systems Ronald Reagan would build upon to confront the Kremlin.

At least the man from Plains was honest enough to reverse course when he realized he was wrong. Do not count on a similar epiphany from the current occupant of the White House. One can only pray that Americans will not witness more groveling billboards on Bragg Boulevard.

A former secretary of the Department of Veterans Affairs and undersecretary of Defense for Personnel and Readiness, Robert Wilkie is a visiting fellow in The Heritage Foundation’s Center for National Defense.