Joe Biden and the Broken Promise of Normalcy 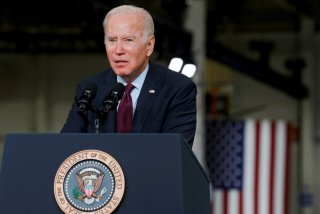 Last year’s presidential campaign invited some comparisons to the presidential election 100 years earlier in which “normalcy” was core to the debate.

More than a year after Joe Biden’s election, the same comparison highlights the failed promise of normal then and now.

True or not, Biden was perceived as a moderate, compared to the chaotic presidency of Donald Trump. And similar to 100 years ago, the promise of returning to normal seem to have sputtered away.

Public fatigue over Trump tweets, various investigations (meritless or not), and assorted drama turned Biden’s basement campaign of rarely speaking into a viable campaign strategy in 2020. Democrats dodged the bullet of nominating socialist Bernie Sanders and knew that angry resistance and annoying wokeness wouldn’t sell to the swing voters looking for calm from the Trump storm.

Biden didn’t explicitly recycle Warren Harding’s “return to normalcy” pitch, but he did call Trump’s presidency “an aberrant moment in time,” and said, “We have to remember who we are.”

Today, Americans are enduring price increases at the highest annual level in three decades, a supply chain breakdown, a border crisis, an unpopular vaccine mandate, an embarrassing retreat from Afghanistan, and a first-year legislative agenda taken from the Biden-Sanders Unity Task Force plan.

While Harding, a Republican, didn’t challenge an incumbent in 1920, he challenged the party of Woodrow Wilson—whose presidency included World War I, progressive policies accompanied by a massive expansion of government, curbs on civil liberties, a failed drive to join the League of Nations, and a pandemic.

Harding campaigned to a landslide win over Democrat nominee James Cox promising “a return to normalcy.” Harding was mocked by Democrats and some in the press who assumed he meant “normality.” He didn’t back down from the term but felt compelled to explain himself  saying: “By ‘normalcy’ I do not mean the old order, but a regular, steady order of things.”

What Americans got was an economy that didn’t return to normal as quickly as voters wanted and a scandal-plagued administration. Republicans lost seats—though not a majority—in the 1922 midterms. And, Harding’s administration became synonymous with corruption. The biggest scandal was the Tea Pot Dome. There were also scandals in the Veterans Bureau and the Department of Justice.

The corruption came to light after his death in 1923, but by most accounts, Harding was well aware his appointees were profiting off their public office, anguished over it, but was unwilling to expose it.

Harding still probably came closer to fulfilling the promise of a “regular, steady order of things” than Biden—as Americans didn’t witness crisis after crisis unfolding in the newspapers and radio in the 1920s, as they have on cable news today.

At this juncture, for comparisons on the scandals front, we don’t have anything major in the Biden administration that comes close to what occurred in the Harding years. Though Hunter Biden might continue to be a bit of a pain.

It turned out to be Harding’s successor, Calvin Coolidge, that restored some stability to the country, presiding over a strong economy.

Perhaps 2024 will produce a candidate that focuses on competency first, and normalcy as a secondary or even lower priority. The promise of back to normal—as a virtue in and of itself—doesn’t seem to have paid off quite so well in 1920 or 2020.