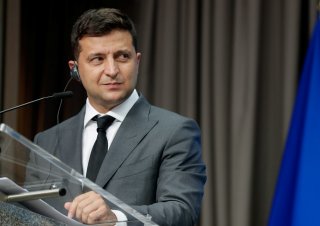 For the first time since the ouster of President Viktor Yanukovych and the banning of his once-dominant Party of Regions, multiple surveys show that its successor, the pro-Russian “Opposition Platform-For Life,” has become the most popular political party in Ukraine, overtaking both president Volodymyr Zelensky’s “Servant of the People,” and former president Petro Poroshenko’s “European Solidarity.”

While such precipitous reversals of fortune are hardly unusual in Ukrainian politics—few presidents have managed to retain positive ratings after their first year—Zelensky’s decline is extraordinary because his party also has an unprecedented absolute majority in the country’s unicameral legislature.

Put simply, in contrast to all his predecessors, Zelensky had all the instruments of power aligned in his favor, including the support of the West which, under the watchful eye of the G7 Ambassadors’ Support Group for Ukraine, offered advice to his inexperienced team on whom it should hire and what policies it should implement. At long last, it seemed, all the stars were aligned for the implementation of a rapid-fire pro-West strategy, which the Zelensky’s supporters even referred to as “the turbo-regime.” What could possibly go wrong?

Quite a lot, as it turns out. The combination of rare political ineptitude and perceived subservience to Western interests has resulted in a political meltdown not seen in Ukraine since the Orange Revolution of 2004. At that time, president Victor Yushchenko, another darling of the West, also entered office on a wave of popular enthusiasm, only to leave four years later with a popularity rating of less than 6 percent.

Having stumbled into politics after a long career in the entertainment industry, Zelensky’s political inexperience was expected, and therefore largely forgiven by the electorate during his first half-year in office. Disgusted with professional politicians, Ukrainians were willing to gamble on a bumbling but likable “everyman” of the sort that Zelensky had played in his comedy series “Servant of the People,” later the namesake of his party.

But rather than learn from his initial mistakes, Zelensky decided to double down on them. He rotated cabinet ministers like they were out of style and continued the same divisive cultural policies that had led to popular disenchantment with his predecessor. The latest example is the new fines, to begin January 16, 2021, for initiating a conversation with a customer in any language but Ukrainian in any commercial or public capacity (religious services being the only exception). The parties may switch to another language afterward if both sides consent. This curious imposition is bound to cause further strife in a country where roughly a third of the population prefers to speak Russian and a majority of the population considers government restrictions on their choice of language to be a human-rights violation.

The continuation of such divisive policies has alienated the very constituency that brought Zelensky and his party to power, namely the largely Russian-speaking southern and eastern Ukraine. They voted for Zelensky because he promised to end Poroshenko’s efforts to impose the distinct language, culture, and history of Galician Western Ukraine on the rest of the country.

While such “external administration” has been hinted at for years, the increasing number of incidents in which the G7 Ambassadors have intervened to alter policy and governmental appointments has made the loss of Ukrainian sovereignty to the West the hot political topic in Ukraine for 2021.

While Westerners are mainly familiar with how, as vice president, Joe Biden pressured president Poroshenko into firing Ukraine’s prosecutor general, Viktor Shokin, more recent examples include: preventing the removal of the head of the National Corruption Bureau after the Ukrainian Constitutional Court declared his appointment unconstitutional; discouraging  Ukraine from buying Russia’s Covid vaccine; rescinding the Ukrainian government’s October 2020 agreement on cybersecurity and telecommunications with China and replacing Huawei’s equipment with analogues made by Cisco; pressuring Ukraine not to sell its renowned engine manufacturer Motor Sich to Chinese investors; and even putting pressure on churches in other countries to disavow the country’s traditional Orthodox Church, in favor of the Orthodox Church of Ukraine that president Poroshenko set up to help his presidential campaign.

Such obvious Ukrainian subservience to the West has begun to provoke dissent even at the highest levels of government (after the president’s deputy chief of staff, Oleh Tatarov, went public with his criticism of “external administration” he suddenly found himself indicted and suspended from office), which only further erodes the president’s ratings. Zelensky’s strategy for ending this political death spiral seems to be to wait for Biden to become president so that, as his foreign minister puts it, America and Ukraine can start to “rock n’roll” together.

This shows a very naïve understanding of American foreign policy. While bipartisan congressional support for almost anything anti-Russian can be taken for granted, this is a far cry from the U.S. Congress actually promoting the interests of Ukraine. In America’s current wound-licking mood the new Biden administration can ill afford to substantially increase foreign aid to any country, or even to push Ukraine ahead of other allies in the distribution of the coronavirus vaccines. Additionally, given his own family’s well-publicized involvement in the region, Biden can’t afford to be seen to be overly chummy with the political leadership of Ukraine, lest Republicans and media critics pounce on this as proof that they were right all along in accusing Biden of nefarious dealings there.

Coming up with an effective policy in Ukraine will therefore be a challenge for the incoming administration, which is why, at first, it is likely to follow the approach that Biden himself laid out in his address to the Ukrainian parliament on Dec. 9, 2015.

In this speech, after telling Ukraine’s parliamentarians that “I never tell another man or another nation or another woman what’s in their interest,” Biden told them they should: put aside their “parochial differences,” grant amnesty and “devolved administration” to Donbas, amend their constitution to include judicial reform and decentralization (citing American federalism as an example), overhaul the judiciary and the Office of the General Prosecutor, and enact budgets that are “consistent with your IMF commitments.”

These are all excellent common-sense initiatives, which the current Ukrainian government cannot possibly implement.

For starters, the very mention of constitutional reforms that hint at federalism is taboo in Ukrainian politics. As for the Minsk Peace Accords, several Ukrainian officials and senior negotiators, both past and present, have admitted candidly that they never intended to fulfill them as written.

Meanwhile, Zelensky and his advisors have hinted at the existence of an undisclosed Plan B which, judging from the statements of other former officials, seems to involve some sort of blitzkrieg by the Ukrainian army against Donbass. Finally, what Biden in his speech called “the pervasive poison of cronyism, corruption, and kleptocracy,” has since grown to levels that can compare with the massive amounts of money that the government spends to combat it.

It is time to acknowledge that U.S. policy in the region has failed. First, because it is premised on the assumption that there is a “united Ukraine” when in fact, as Evgeny Lapin of Ukraine’s Civil Society Institute found while conducting roundtables around the country, the historical memories of Eastern and Western Ukrainians continue to be diametrically opposed. As a result, he says, as soon as one part of Ukrainian society agrees on certain themes that unite it, it immediately finds itself in confrontation with another part. Even New Year’s celebrations are divided by region and political preference, although three-quarters say that they still celebrate Christmas on Jan. 7.

Western analysts downplay these differences, which has led to the second reason for the United States’ policy failure—the assumption that war with Russia would smooth over all internal disagreements. It has indeed shifted opinions, as shown by the decline in the number of Ukrainians who harbor positive feelings for Russia from over 80 percent to just over 40 percent today, but not to the degree of undoing centuries of historical, religious, and cultural ties with Russia.

The latest evidence for this comes from Google and YouTube. Year-end tallies for searches on these two platforms show that Ukrainians still conduct searches overwhelmingly in Russian, and for cultural content from Russia. Moreover, this trend got stronger in 2020. The authors of one report conclude that “Google’s indicators also refute Zelensky’s recent statement that ‘after the annexation of Crimea and the aggression in Donbass, we have only one thing left in common—the state border.’ As it turns out, despite constant blockage [by the Ukrainian government], in the internet there are no such borders.” It is doubtful whether any policy that simply turns a blind eye to these persistent internal divisions can ever be successful because it will be deemed hopelessly one-sided.