Joe Biden Could Overstimulate the Economy Into a Crisis 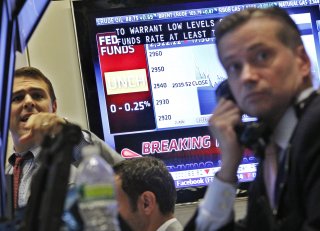 Excessive economic policy stimulus on the scale of that now being experienced in the United States generally ends in tears.

The only real question is whether such stimulus ends in a period of sustained inflation or whether it ends in financial market dislocation. The fact that the current U.S. economic policy excess is coinciding with a global-everything equity and credit market bubble would point to financial market dislocation rather than a prolonged period of sustained inflation.

The current explosion in the U.S. money supply can leave little doubt that America has monetary policy excess on an unprecedented scale. Indeed, over the past year, the broad measure of the U.S. money supply has been growing at an annual rate of 30 percent as a result of the Federal Reserve’s ultra-aggressive bond-buying program. To put this in context, the present rate of money supply growth is some three times higher than its previous peak growth rate experienced in the past sixty years.

Evidently, Fed Chairman Jerome Powell does not agree with Milton Friedman’s famous dictum that inflation is always and everywhere a monetary phenomenon.

Of even greater concern than the current monetary policy excess is the Biden administration’s budget policy excess. Right on the heels of the December 2020 $900 billion bipartisan budget stimulus, President Joe Biden is now fast-tracking an additional $1.9 trillion dollar budget stimulus.

This means that the amount of budget stimulus to be provided to the U.S. economy in 2021 would be more than three times the size of the 2009 Obama budget stimulus. It would also be a multiple of the most pessimistic estimate of the size by which the current level of U.S. output is falling short of its potential level.

Under normal circumstances, the massive amount of policy stimulus being provided to the economy would be expected to lead to a supercharged economy in the second half of the year once the majority of Americans were vaccinated. This in turn could very well lead to an overheating of the U.S. economy and to higher inflation down the road. Anticipating this possibility, the markets now are demanding a significantly higher yield on U.S. Treasury bonds than at the start of the year. They also have raised their five-year inflation expectation to around 2.5 percent a year, which exceeds the Federal Reserve’s 2 percent inflation target.

It is not simply that today’s U.S. equity valuations are at lofty levels last seen on the eve of the 1929 stock-market crash. It is also that very risky borrower, including high-leverage U.S. companies and overly indebted emerging-market economies, have been able to raise massive amounts of money at interest rates not much higher than those at which the U.S. government can borrow.

Today’s global-everything bubble has been premised on the assumption that U.S. interest rates will remain indefinitely at their current ultra-low levels. This raises the distinct possibility that these bubbles might soon burst if the bond market vigilantes keep forcing U.S. Treasury bond yields higher out of fear of an overheated U.S. economy. Those bubbles might burst once market participants realize how mistaken they were to assume that U.S. interest rates would stay low forever.

In 2008, the bursting of the U.S. housing and credit market bubble triggered the Great Economic Recession. With today’s global-everything bubble so much larger than that which preceded the September 2008 Lehman bankruptcy, it would be unwise to rule out another nasty dip in the U.S. and global economy if indeed the bubble were to burst.

All of this would suggest that, in pushing his excessive budget policy agenda, Biden is playing with economic fire that could come to haunt him in next year’s mid-term election. However, rather than taking the form of a sustained bout of inflation about which many economists are now fretting, this fire could take the form of another leg down in the U.S. and global economy brought on by the bursting of today’s global-everything bubble.

The Federal Reserve Will Never Be Dull Again