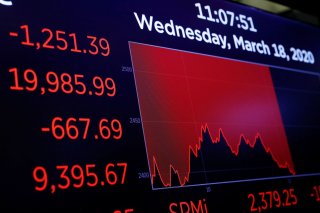 A new study released at the Federal Reserve Bank of Kansas City’s annual conference last week is contending that the ongoing global coronavirus pandemic has already instilled fear within the public that will dampen risk-taking and economic output for decades.

Conducted by the Federal Reserve Bank of St. Louis, the research—titled “Scarring Body and Mind: The long-term belief-scarring effects of COVID-19”—went on to say that the pandemic will only increase the “perceived probability of an extreme, negative shock in the future.”

“While the virus will eventually pass, vaccines will be developed, and workers will return to work, an event of this magnitude could leave lasting effects on the nature of economic activity,” the paper said.

“Businesses will make future decisions with the risk of another pandemic in mind.”

The researchers noted that businesses will continue to be overly cautious about not only another viral outbreak but also other possible unexpected disruptions to the economy.

“We learned that the world is riskier and more unpredictable than we thought,” the paper said.

“The shocks that hit one sector may hit another tomorrow, in ways that are impossible to foresee.”

The research also highlighted the fact that the pandemic will make certain “capital”—such as equipment and buildings—obsolete because of their fast-depreciating value in the future economy.

This can be seen even today, as restaurants are shuttering their doors or only allowing diners to use a small portion of their space. Many offices are now empty as more employees are working from home.

Moreover, the paper asserted that fewer individuals will take on added risk and start new businesses—as current widespread defaults and bankruptcies will discourage them from doing so.

The study has hinted that the coronavirus pandemic will result in even deeper long-term damage than the oil crisis of the late 1970s, the early-1990s recession, and the Great Recession.

Such economic damage might include a substantial decrease in the U.S. gross domestic product this year—which could ten times the projected 6% to 9% drop.

Also, depending on whether the United States has one or multiple lockdowns, the coronavirus’ effects will likely shrink economic output over the span of seventy years by 57% to 90% of the annual GDP before the pandemic began, the paper said.

Now more than eight months into the pandemic, there are roughly 26.1 million confirmed cases of coronavirus worldwide, including at least 865,000 related deaths, according to the latest data from Johns Hopkins University.