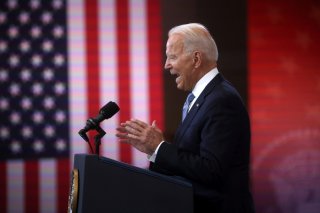 For nearly two years now, the FBI has nabbed dozens of Chinese Communist Party spies who, while posing as graduate students and research scholars at top academic institutions, siphoned out America’s most cutting edge national defense material for untold years. The spies, many secretly members of China’s military services, had to get in close to do damage this grave and found an unguarded path through America’s largely self-babysitting cultural exchange and student visa programs.

But on the eve of plugging these national security holes, President Joe Biden has canceled the repair and instead bestowed a priceless gift on People’s Liberation Army intelligence services: continued American vulnerability. At issue are the 1.5 million cultural exchange “J” visas and the student “F” visas active in any given recent year. Almost without media notice on July 6, the Biden Department of Homeland Security (DHS) withdrew a September 2020 regulation from the Federal Register that former President Donald Trump’s administration had proposed to relieve the espionage problem and many more besides, like foreign terrorist infiltration and immigration fraud.

All of the arrested Chinese spies used the J and F visas to relieve top American research institutions and their naïve professors of their most sensitive and prized national defense research.

Proposed Rule 2020-20845 was good, apolitical governance that America sorely and obviously needed. It prominently cited the Chinese espionage rampage along with terrorism and immigration fraud for forcing the J and V visa holders of 59 countries to renew them every two or four years, plenty to complete an average graduate degree program or research project. The most valuable part of the process would have had DHS conduct highly useful eyeball-to-eyeball interviews with renewal applicants. The agents also would collect biometric information, spot-check progress at academic institutions, and double-check that originally claimed purposes remained valid going forward.

This periodic regimen would have put the first real basic government oversight on programs whose beneficiaries worldwide always enjoyed open-ended, self-reporting schemes that allowed for indefinite years of visa renewals largely free of close oversight or security vetting opportunities. That system, for instance, allowed the institutions that benefit most from the cheap captive research labor to send word to the U.S. government that they wanted to renew visas. And nothing was in place for government to check when programs justifying the visas ended or changed beyond the originally claimed scope. Visa holders could live for years in the country doing no work or study until they became illegally present.

In short, this was a recipe for regular immigration fraud, espionage, and Islamic terrorism. Perhaps, for instance, a regulation like this one would root out future F-1 visa overstays like country 24-year-old Egyptian Khaled Awad, who stands accused of stabbing Rabbi Shlomo Noginski on July 1 outside his Boston synagogue and was implicated in an earlier anti-Semitic attack on a college roommate.

Discoveries of Khaled Awads would have been possible under the regulation that Biden spiked, which added a useful terrorism screen into the process where trained DHS officers could periodically assess whether student visa holders from countries of terrorism concern, such as Egypt, were keeping their end of the bargain or gave good reason for investigative referrals to the FBI. Keep in mind that F-1 visa holders have far too often committed terrorism crimes in the United States, including a number of the 9/11 hijackers entered on bogus student F visas that enabled plotting.

Other countries were listed among the 59 based on statistics showing that their citizens most frequently overstay their visas to live illegally in the United States, such as Nigeria, Haiti, Congo, and Cameroon.

The now-dead regulation put all of this simply: “These changes would ensure that the Department has an effective mechanism to periodically and directly assess whether these non-immigrants are complying with the conditions of their classifications and U.S. immigration laws, and to obtain timely and accurate information about the activities they have engaged in and plan to engage in during their temporary stay in the United States.”

What could be so terrible in any of that?

In its explanation, the Biden administration pointed out that 99 percent of those who commented on the regulation – a great many of them likely the affected foreigners, school administrators, and exchange visitor programs – just didn’t want to go through all the bothersome rigmarole for their generous host nation’s security interests, such as showing up for an interview every four years and having to file paperwork.

The regulation, the opponents most frequently complained, “would significantly burden” them with extra cost and time, would discriminate based on nationality, and would deny them access to “immigration benefits.”

Placed in the context of very real harms of past and present Chinese espionage and foreign student terrorism, rationales like these come off as petty, petulant, selfish, and far from meeting a greater collective national safety need. Although no one in the Biden administration may ever say so out loud, they killed this greater good for perhaps the pettiest reason of all: Donald Trump was the one who proposed it.

That is music to Chinese Communist Party ears.