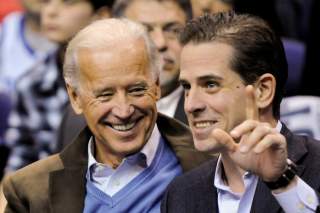 Family has always been a delicate issue for former Vice President Joe Biden. When he was still a senator-elect, in December 1972, his immediate family was in a car accident. His first wife and infant daughter were killed, while his two sons, Beau and Hunter, survived. Going forward, Biden began the practice of commuting on Amtrak from Delaware to Washington, DC every day so he could return home to his children.

As an adult, Hunter Biden has been the black sheep of the Biden clan. He has suffered from alcoholism for several decades, and he has used both cocaine and crack recreationally. In 2013 Hunter was commissioned as an officer in the U.S. Navy Reserve, in a ceremony administered by his father. A month later, he was given an “administrative discharge” after testing positive for cocaine. Hunter claims his consumption of the drug at the time was accidental.

Despite multiple attempts at rehabilitation and abstention, it was not enough to save his marriage. In 2015, Hunter separated from his wife of twenty-two years, Kathleen Buhle. In the subsequent divorce proceedings, Kathleen claimed Hunter had left the family (including their three children) in financial ruin through his extravagant spending on alcohol, drugs, prostitutes, strip clubs, and multiple affairs. Hunter denies the prostitution accusation but admitted to going to a strip club immediately after the legal motion was filed. He claims it was his first time doing so in years. Their divorce was finalized in 2017.

As previously covered at the National Interest, Hunter Biden assumed a position on the board of a Ukrainian natural gas company called Burisma Holdings in April 2014. This was two months after a U.S.-backed uprising against the previous Ukrainian government, an action U.S. officials at the time said was “midwifed” by his father, who at the time was vice president.

A former Obama State Department official, speaking to the National Interest, said “Ukraine was looked on in 2014, prior to the crisis with Russia, as a sort of policy backwater. There was very little high-level attention.” Speculating on why Joe Biden was given the Ukraine portfolio instead of other members of the administration, the former official gave multiple possibilities, including an adversarial relationship between National Security Advisor Susan Rice and former Ukrainian President Petro Poroshenko, and ideological disposition. While President Barack Obama was more hard-nosed on Ukraine, “Biden I think had something more of a liberal-internationalist approach to Ukraine, where he understood it could be an important part of the European order.”

Hunter Biden served on Burisma’s board from 2014 to April 2019, a five-year period where he was paid $50,000 a month. While never traveling to Ukraine himself, he regularly attended the company’s twice-annual board meetings, while providing legal and strategic advice. Prior to Burisma, Hunter Biden worked in the Clinton administration Commerce Department, where he focused on e-commerce issues; on the board of Amtrak under President George W. Bush; and in 2013 co-founded BHR Partners, a firm focusing on Chinese capital investment. He had no previous experience with either Ukraine or the energy field.

During an interview with ABC News, when asked if he would have been given the position at Burisma without the last name Biden, Hunter said, “I don’t know. Probably not.” He maintains that he does not regret taking the job.

In conversation with the National Interest, the former Obama State Department official said that during his time in the administration he never heard Hunter Biden’s name mentioned in conjunction with Ukraine, nor was he familiar with the firm Burisma Holdings. Deputy Secretary of State George Kent, testifying behind closed doors last week, apparently stated that he tried to address concerns over Hunter Biden’s business dealings with the vice president’s office in 2016 but was rebuffed by Biden staff.

Biden pere is unwavering in support of Biden fils. “My son did nothing wrong. I did nothing wrong . . . My son’s statement speaks for itself,” Joe Biden said during last week’s Democratic primary debate, referring to the ABC interview which aired hours earlier. “My son made a judgment, I’m proud of the judgment he made, I’m proud of what he had to say.”

Both Bidens assert that they never discussed Hunter’s business dealings in Ukraine, beyond a comment in late 2015 when the elder Biden said, “I hope you know what you’re doing,” and his son responded, “I do.” Did he?

Joe Biden’s eldest son, Beau, served as Attorney General of Delaware from 2007 to 2015 and had the intention of running for governor in 2016. He had joined the Delaware National Guard in 2003, and from 2008–2009 was stationed at Camp Victory in Iraq. Camp Victory made use of a large burn pit, where waste (including paints, plastics, tires, and Styrofoam) was burned in the open air. Doctors now connect the use of these burn pits and the carcinogens they released to heightened rates of cancer among veterans. Beau Biden died prematurely of brain cancer in 2015. As a Senator, his father voted in favor of the Iraq War in 2002.

A year after Beau’s death, Hunter Biden (while still legally married) began a romantic relationship with his brother’s widowed wife Hallie, whom he said shared his grief. When news of the relationship broke, Joe Biden said in a statement to the New York Post, “We are all lucky that Hunter and Hallie found each other as they were putting their lives together again after such sadness. . . . They have mine and Jill’s full and complete support and we are happy for them.” They broke up early this year.

In May 2019, Hunter Biden married a South African filmmaker named Melissa Cohen. They had met each other a week before the ceremony. The couple currently lives in Los Angeles.

Now Hunter and, by extension, his father’s third run for the presidency, have become enmeshed in controversy as Donald Trump’s attempts to pressure Ukraine into investigating Hunter’s questionable business dealings in the war-torn country are coming under attack from congressional Democrats. The impeachment inquiry has focused on Trump. It would be a pity, however, if it obscured the miasma of sleaze surrounding Hunter Biden, particularly as his father tries to run as someone who exemplifies old-fashioned “middle-class” values.