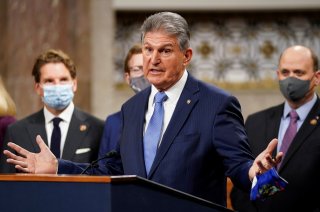 When the Democrats scored a 50-50 majority in the Senate, with Vice President Kamala Harris casting any tie-breaking vote, partisan power and persuasion fell into the lap of Senate Majority Leader Chuck Schumer (D-N.Y.) amid boiling political polarization on Capitol Hill.

Dubbed “your highness,” “the man” and the “Democratic version of John McCain” by colleagues, Manchin has sculpted himself as a moderate conservative Democrat who’s centered at the helm of the party.

“He’s kind of the Democratic version of John McCain,” Sen. Jon Tester (D-Mont.) told Politico. “I say that partially in jest. But partially it’s true: Joe’s a hard guy to figure out how to lead. You know? He dances to his own music.”

His nicknames are likely due to his voting record, as Manchin isn’t afraid to publicly speak his mind on pressing issues and doesn’t let party lines dictate how he’ll vote. While he’s sided with his caucus on approving President Joe Biden’s $1.9 trillion stimulus proposal, the West Virginia senator rejected a Democratic push to set the federal minimum wage at $15 and urged the president to reverse course on the Keystone XL pipeline, siding with Republican critics, as one of his first acts as chairman of the Senate Energy Committee.

“Manchin is the go-to swing vote on virtually all non-budgetary matters . . . in the Senate, so his importance is difficult to understate,” Robert Litan, a non-resident senior fellow at the Brookings Institution, said.

The former governor of West Virginia is generally considered the most moderate Democrat in the split senate, as he voted with former President Donald Trump 50.4 percent of the time during his political career. For example, Manchin has worked with Republicans on legislation involving abortion and gun ownership. He also notably poured cold water over former President Barack Obama’s climate plan in 2010 and voted to confirm most of Trump’s cabinet and judicial appointees, including Supreme Court Justice Brett Kavanaugh.

“In a 50-50 Senate, every senator is king. That’s especially true for the handful of centrists such as Manchin who can bend partisanship a bit, depending upon the issue,” Dr. Larry Sabato, a politics professor and director of the University of Virginia’s Center for Politics.

And as a fiscal conservative Democrat, Manchin offered support of Biden’s massive stimulus plan with strings attached—“If it’s $1.9 trillion, so be it,” Manchin told MSNBC last week. “If it’s a little smaller than that and we find a targeted need . . . that's what we're going to do. But I want it to be bipartisan. If they think we're going to throw all caution to the wind and just shove it down people's throats, that's not going to happen.”

In other words, the bill must have bipartisan support—a demand that’ll likely be squashed as Democrats moved forward with efforts to pass the spending measure through a budget reconciliation process that wouldn’t need GOP support.

But Manchin’s votes have cost him support from progressives—perhaps due to his opposition in backing Medicare For All and nixing the filibuster—with the far-Left wing threatening a primary challenge, though he isn’t up for reelection until 2024.

Progressives must be mindful, however, that Manchin is in a powerful senatorial seat, where he can make or break lots of bills for Democrats. During the Senate’s recent voting marathon, Manchin was often the deciding vote for several partisan bills, including the GOP amendment on preserving federal aid for houses of worship—a measure in which he ultimately sided with Republicans.

More recently, though, Manchin revealed that despite his plea for bipartisanship, he’ll more often back Democratic initiatives and votes, considering his rebuff of Sen. Tom Cotton’s (R-Ark.) effort to impose limited expansions on the Supreme Court and rejection of Sen. Marco Rubio’s (R-Fla.) move to eradicate some of Biden’s immigration policies.

He’s also repeatedly flexed his ideological muscles in a state that’s backed a Republican president for the last two decades. Manchin is the only Democrat holding statewide office in West Virginia as of the most recent election, a state that Trump won by thirty-nine points in 2020 and by forty-two points in 2016, while Sen. Shelley Moore Capito (R-W.Va.) defeated progressive candidate, Paula Jean Swearengin by forty-three points in the 2020 election.

“Manchin is a former popular governor of West Virginia who has a lot of credibility with voters of [West Virginia], who generally approve of his forthrightness, despite the deep division [between] the parties on national issues,” Litan said. “Voters remember his cross-the-aisle style of governing when he was governor, and that reputation carries over to his Senate reputation.”

One other Democrat who was elected in a bright red state was Tester of Montana but Trump won it by sixteen points in 2020, not almost forty, like what happened in Manchin’s case.

“Manchin is a shrewd judge of how he can balance his membership in the Democratic Senate caucus with the demands of an increasingly Republican state. West Virginians know him well from his terms as Governor and Senator, and his knowledge of West Virginia is encyclopedic,” Sabato said. “Manchin is also very personable, which matters there. Small states expect to see and interact with a Senator.”

Some critics have viewed Manchin’s isolation in a Republican-dominated state as a weakness, however, and see it is a critical opening for the GOP to swipe in to steal back the upper chamber in 2024. The National Review’s Kevin Williamson has even suggested Manchin switch parties due to his vulnerability in West Virginia, as he won reelection 2018 by just three points.

“Still, his margins are shrinking. He may be the last Democrat elected statewide, going forward,” Sabato said. “He’s talked about capping his career by running for governor again, a position that is less partisan and ideological than Senator.”

But Manchin has offered no indication of changing party lines and instead, has embraced his time in the “hot seat,” serving as the bipartisan bridge between two politically polarized parties.