Is John Bolton Getting Ready to Take Down Trump? 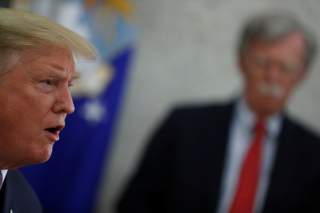 John Bolton wants you to know he’s not going anywhere.

The former national security advisor to Donald J. Trump relayed late this week: “We have now liberated the Twitter account, previously suppressed unfairly in the aftermath of my resignation as National Security Advisor.  More to come.....”

Bolton, the career Republican and Washington infighter, then proceeded to a move all too Washington insider: he teased out his SuperPAC. “Let's get back to discussing critical national-security issues confronting America,” Bolton tweeted Saturday.

“The threats are grave and growing.  The presidency and control of the House and the Senate will all be decided in less than one year.  It's time to speak up again! #JohnBolton,” he said, bravely hashtagging his own name.

For the left, the consummate conservative has revealed himself to be an utter poltroon: weary of a would-be dictator president, but unwilling to officially cross him. For some on the right, he’s a potential traitor in their midst. Bolton “is THE witness for the prosecution.” a former senior administration official told me earlier this impeachment autumn.

On Steve Bannon’s new radio-television show, “War Room,” Bolton is sometimes called “Book Deal Bolton,” likely because he landed a book deal worth $2 million. Bannon himself plays his cards close to the vest, but it’s nonetheless an astonishing fall from grace for the pol whom Bannon backed hard for the NSA post two short years ago.

The reality, however, remains the same: Bolton needs, or would at least prefer, regime change, the favored measure of his political career. All other measures are half measures. Bolton is not poised to inherit the MSNBC’s pundit’s chair, or the CNN contributorship. But a young man yet at 70, he could shape the Republican Right’s future-- that is, if his old boss is out of the way.

After dispatching with Bolton, Trump attacked his neocon-adjacent ex-subordinate: he’s “Mr. Tough Guy,” the president said. He was so tough, “he got us into Iraq.” It was unsparing criticism from the Republican standard-bearer who a year-and-a-half earlier enjoyed the cover the hawkish power player provided. But, again, it brought home a reality for some core supporters: the Trump White wasn’t the Buchananism some on the populist right hoped for-- it was Buchanan on bath salts.

Trump is now cornered. But he’s been cornered before, from bankruptcies on the Jersey Shore to Access Hollywood tapes in October. His core interlocutors -- and some of his most trenchant opponents -- expect he will escape again, another Houdini act in a harrowing presidency.

He very well might. His Democratic opposition appears divided on the nature of their opposition to him: is it that Trump is a maniac usurper to the current system, i.e.
Joe Biden or Pete Buttigieg, or is that he hasn’t gone far enough, as Elizabeth Warren or Bernie Sanders would argue? The British elections next month should provide instruction on whether the world is more prepared for a restorationist or and even more strident radical.

Conservative critics of the seriousness of the impeachment inquiry should find some recent developments sobering. Michael R. Pompeo, the Secretary of State, has hired William A. Burck, the maestro conservative counselor, to defend him during the ongoing House inquiry. Those with skin in the game, at least, are bringing out the heavy artillery.

Still, one can’t help but conclude the metafight on offer is about preexisting convictions more than conduct. Fiona Hill, the ex-National Security Council Russia aide, expressed horror that Trump and his inner circle were not requisitely animated about the plight of Ukraine.

And that’s brass tacks: the real objection to Trump among the foreign policy hardliners is that he objects to the true faith. As Bolton wrote Saturday: “We need to make U.S. national security a priority. The threats are grave and growing. ... It's time to speak up again!” This conservative boilerplate, redolent of the Reagan and Bush eras, didn’t work in 2016. If Bolton has anything to say about it, it will make a comeback in 2020. For now, however, it is Trump who holds the cards and he isn’t about to fold easily.

Curt Mills is a contributor to the National Interest.