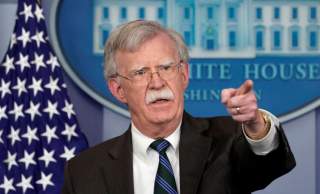 John Bolton, national security advisor, is tapping Richard Goldberg of the Foundation for Defense of Democracies (FDD) for a key post.

FDD President Mark Dubowitz confirmed the hire on Twitter late Monday: “Couldn’t think of anyone better than my @FDD colleague @rich_goldberg to join NSC to maximize the maximum pressure campaign against the Islamic Republic of Iran.” The White House has not yet publicly commented.

The story was first reported in Jewish Insider. Goldberg has locked his previously-public Twitter page, following the course taken by other NSC hires, such as Fred Fleitz (who has since departed) and Anthony Ruggiero, formerly of FDD, who swiftly locked their Twitter pages upon ascension to the White House.

Goldberg previously worked for Illinois politicians Mark Kirk and Bruce Rauner. He will join Bolton’s staff as the director for countering Iranian weapons of mass destruction.

Bolton has made clear in recent days that his office’s focus on Iranian proliferation remains undiminished, alleging nothing but bad faith from Tehran. "We have little doubt that Iran’s leadership is still strategically committed to achieving deliverable nuclear weapons,” he said Sunday.

His new hire takes a view of Iran similar to many of Washington’s most committed Iran hawks. He views the regime in Tehran as akin to the Soviet Union—a hub of a global, anti-American counterculture and internally collapsible if Reagan-style pressure is applied, as he advocates.

“Regime change has become a loaded political term,” Goldberg has said in congressional testimony, rejecting comparisons of Iran hawks to those who pushed the U.S. into war in Iraq, even though the two groups have heavy overlaps. “We need to look at more of a Cold War-era policy. What was the Reagan administration’s victory policy, rollback policy toward the Soviets? We definitely wanted behavioral change.”

The Trump administration has insisted U.S. policy is for Iran to change its behavior, and that it is not formally seeking a change in the government itself. That’s contradicted, however, by administration allies such as the president’s attorney, Rudolph Giuliani, who told me last year that the U.S. policy is essentially regime change. “If you listen to John Bolton,” Giuliani told me. “I mean, John Bolton makes it very clear—I guess there’s a miracle that could happen—but it’s very unlikely that these murderers are going to change. So, that probably means regime change.”

Whatever you make of the Goldberg acquisition, Bolton is on a roll.

On travel in the Middle East, Bolton, a master bureaucratic knife-fighter, has apparently stymied President Donald Trump’s earlier orders for a swift withdrawal from Syria and q partial drawdown in Afghanistan; those orders had thrilled skeptics of the need for American primacy. The president is “slowing down” the exodus from Syria, political ally Sen. Lindsey Graham has said.

The turn of events comes as close allies, such as Israel, seek to extract additional concessions:  Prime Minister Benjamin Netanyahu is reportedly lobbying for official U.S. recognition of Jerusalem's claim to the Golan Heights, if the United States were to leave Syria soon.

The Syria drawdown was originally agreed to by Trump in a December phone call with Turkish president Recep Tayyip Erdogan, which Bolton listened in on. Bolton’s upcoming meeting with Turkish officials this week is expected to be tense.

Dubowitz and others at FDD had been publicly lamenting the president’s recent turn. FDD would not comment for this article.

Dubowitz and FDD’s Reuel Marc Gerecht wrote in The Atlantic in December that should Trump pull out of Syria, Tehran might quietly prefer him to his predecessor Barack Obama. “Although [Supreme Leader Ali] Khamenei didn’t say so, it’s a good guess that if given the choice between dealing with American sanctions or America staying in Syria, Iraq, and Afghanistan, he’d take the former,” the duo wrote. “Trump’s withdrawal has severely weakened his own Iran policy, signaling boredom, fickleness, fatigue, and fear.”

The nadir for FDD was doubtless Trump’s statement at the White House in December that Iran “can do what they want” in Syria, shocking much of the foreign policy establishment.

But the revolving door between the West Wing and FDD testifies to the enduring power of cadres.