John Kerry and the Perils of America's Do-Everything Diplomacy 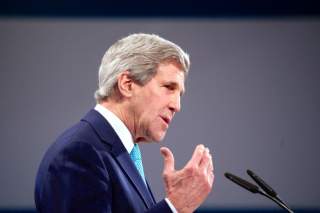 Some three years ago, Reason magazine editor-in-chief Matt Welch issued a denunciation of what he branded “do-something punditry.” This was, he said, an insidious form of commentary that pretended to elevate itself above ideological battles by offering content-free calls to noble action. “Do something. Is there a two-word phrase in politics more loaded with disguised ideological content? Embedded within is both an urgent call for powerful government action and an up-front declaration that the policy details don’t matter. The bigger the crisis, the more the urgency, the sparser the detail.” This simplistic and ostensibly nonpartisan approach, charges Welch, is really little more than an appeal to whoever is in power to use the government as “the world’s largest problem-solving tool.” It’s a call for action, whatever the action may be—and it’s always finding new ways to act.

America’s national-security state suffers from a similar ailment. Money has been surging into it for a decade now. The president’s proposed baseline defense budget for 2016 is the largest ever, while the State Department and the U.S. Agency for International Development also get big boosts. And when you pay a bunch of guys to swing hammers, they find a bunch of nails. Nice things we’d like to do because they’re commendable turn into imperative things we must do to make America safer.

We see this in the Obama administration’s new National Security Strategy, which crams a dog’s breakfast of international problems into its concept of national security. If its all-inclusive security concept holds, one wonders how our forefathers were able to build our massive, world-bestriding empire without having recognized the urgent strategic importance of advancing global gender equality, empowering young leaders, investing in Africa’s future, “enabling effective and equitable service delivery,” “eradicat[ing] extreme poverty,” “modernizing rural agriculture,” or any of the dozens of other things the administration finds relevant. Viewed through this all-embracing national security lens, our history is rife with missed opportunities. Could World War II have been avoided if we’d supported civil society in Imperial Japan? Might the Cold War have ended sooner if we’d built more institutional capacity? Could 9/11 have been stopped if our NGOs had better convinced the Middle East of the merits of East Coast gender norms?

That’s not to say that these initiatives don’t make the United States marginally stronger or safer. Safety is like money: no matter how much you have, you can always get more. But return on investment matters. Apple CEO Tim Cook wouldn’t be doing his job well, for example, if he devoted lots of resources to selling replacement parts for the company’s long-discontinued digital camera line, even if Apple could make a few bucks on them.

The international system demands a similar sense of priorities. Peaceful, stable relations among the great powers are a prerequisite for lasting progress in any of the areas the new National Security Strategy identifies as important. Agriculture will be hard to modernize if a rival state is backing a rural insurgency. Extreme poverty won’t go away in a country torn by international proxy war. Services won’t be delivered more efficiently if a foreign power, fearing enemy influence, sponsors a coup. Global thermonuclear war would be an obstacle to women’s empowerment.

It appears John Kerry has lost sight of that. In remarks at the Munich Security Conference on Sunday, the secretary of state said that he didn’t agree with “the claim...that the entire international system is somehow unraveling...I don’t see an unraveling. I see the very opposite. I see nations working together...” He then rattled off nearly a dozen areas of cooperative improvement: trade deals, fighting Ebola, increasing life expectancies, “expanding access to primary education,” and so forth. Bravo! But these don’t truly reflect on the ability of the international system to sort out conflicts. Everybody, except maybe the Islamic State group, sees widespread Ebola as the worst-case scenario. There might be disagreements about how best to fight Ebola, and some states may attempt to free ride on others’ efforts rather than pitching in, but no serious country is pro-Ebola. Cooperation against Ebola is thus no great cause for optimism—it’s what we’d expect.

The real test of the international system is when states’ fundamental interests clash. Will their leaders decide that destructive, expensive, dangerous choices (like war) will better safeguard their interests than peace and cooperation? Because conflict rarely offers a net benefit for all involved, an international system that’s working well should produce few conflicts and find ways to end those that happen. Yet today, in Ukraine and Syria, major powers’ actions suggest they’d rather let a bloody war drag on than make a deal with their rivals. And both wars have underscored the danger of letting it fester. The Islamic State group rose from the chaos in Syria and has invigorated violent radicals across the globe. The Ukraine conflict has provoked a major deterioration in relations between the world’s two largest nuclear powers.

In both cases, the danger that the conflict will metastasize into new countries is quite real; the Ukraine crisis, in particular, encourages zero-sum thinking and tension along the whole European front. The risk of a conflict between Russia and NATO is higher than it has been in decades. Such a conflict would, to put it gently, endanger that boost in life expectancies that Kerry hailed. Kerry’s notion that the international system is working well and getting better ignores the growing danger. It requires a belief that each of our new national-security concept’s goals have equal weight, that failures in one area, no matter how crucial, can be balanced by success in another, no matter how peripheral.

Welch’s do-something pundits operate by a similar logic: they “never hav[e] to say [they]’re sorry” because “by the time flaws make front-page news, there is always a new crisis requiring urgent intervention.” They escape accountability again and again. Our do-everything diplomacy does the same: as relations between two nuclear-armed states approach a dangerous nadir, Kerry reminds us of the great strides we’ve made in maternal healthcare in the third world. Perhaps next, as the world burns, he’ll boast he’s taught the emperor to fiddle.