John McCain Is Wrong About the Russia Hack 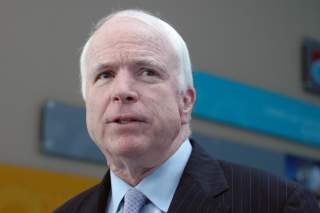 For someone who has served in war, Sen. John McCain is easily shocked. He has joined the chorus in Washington protesting Russia’s alleged hacking of the Democrats. He and his colleague Sen. Lindsey Graham are pressing for an investigation by a newly-constituted select congressional committee.

McCain naturally blamed President Barack Obama, who, it seems, is responsible for just about every problem on earth for his lack of “leadership” (which McCain never defines). In this case, McCain worries, if the Russians are “able to harm the electoral process, they may destroy democracy.” Indeed, he continued, “This is the sign of a possible unraveling of the world order that was established after World War II, which has made one of the most peaceful periods in the history of the world.” If the martians arrived tomorrow with conquest in mind, no doubt McCain would ascribe the invasion to Obama’s lack of leadership, which would be evident even a world away.

For all of the sturm und drang generated by the alleged Russian hack, it appears to have been rather modest. Some doubts remain that the Russians even were responsible. Nor was there any attack on the American electoral system. No voting machines were broken into. No votes were changed. Donald Trump won because a majority of Americans in critical states preferred him to his badly compromised opponent, whose failings have been on display publicly for a quarter century. Neither Moscow nor anyone else changed the outcome.

Moreover, there is evidence that an attempt was made to hack Republican accounts as well. In any case, the cyber-raid was of a private party, in which no national secrets were compromised or business technologies stolen. Rather, the information obtained should have been public since it highlighted the sleaze surrounding the Clintons. The release actually benefited the American public. Indeed, if the information had been of similar dubious behavior by the Trump campaign, journalists would have fallen all over themselves to publish or broadcast the information “in the public interest.”

The lesson of the Democratic hack, as well as previous attacks on Sony Pictures and other private entities, is that cybersecurity is everyone’s responsibility. There are more than a few malign actors on the loose who will take advantage of any opportunity to steal information for fun or profit. Washington’s negotiations with China demonstrated that cyber-theft can be limited, but the problem will never disappear. However, the “world order”that McCain fears is in jeopardy is likely to survive.

Ironically, Democrats were not always so squeamish about reliance on Moscow for political support. In 1983 California Sen. John Tunney, an intimate of Sen. Ted Kennedy, passed a message to KGB head Viktor Chebrikov, who summarized the matter in a memo to Communist Party General Secretary Yuri Andropov, which was discovered after the Soviet Union’s collapse. In sum, Kennedy hoped to bring Soviet political and military figures onto American television to explain how they were misunderstood peaceniks resisting crazy Ronald Reagan’s war-like policies.

Explained Chebrikov to his boss, who had previously headed the KGB, “Kennedy is very impressed with the activities of Y.V. Andropov and other Soviet leaders, who expressed their commitment to heal international affairs, and improve mutual understandings between peoples.” Indeed, while stationed in Budapest in 1956 Andropov demonstrated his people-to-people skills in dealing with discontented Hungarians.

Sen. McCain, too, apparently is unaware of his own hypocrisies and inconsistencies. He and the neocons have never been shy about insisting on Washington’s right to intervene in other nations’ political systems. Covert involvement goes back through the Cold War. Multiple aid programs for “democracy” have been created to back parties and factions seen as more pro-American. U.S. officials insisted on the Palestinian elections which brought Hamas to power. It is neoconservative gospel that President Obama could and should have prevented Mahmoud Ahmadinejad’s re-election in 2009. Numerous Americans, including McCain, made pilgrimages to Kiev to back a street revolution against the elected, Russia-friendly government. The “world order” may have hung in the balance for a time, but ultimately survived.

In 2014 McCain demanded regime change in Libya. Less than two years before, he, Graham and Sen. Joseph Lieberman had been supping with Moammar Khadafy in Tripoli discussing how to provide the latter with aid to combat al-Qaeda. No wonder the Libyan dictator was shocked when his erstwhile allies decided to oust him.

Sen. McCain has never seemed to find a war he doesn’t want to fight—Balkans, Afghanistan, Iraq, Libya, Syria, Iran, North Korea, Georgia, Ukraine. He criticized Russia in its war with Georgia even though international observers stated that Tbilisi started the hostilities by shelling South Ossetian territory, in which Russian soldiers were stationed. Incredibly, he declared in 2008: “in the 21st century nations don’t invade other nations.”

Oops. Inconsiderate observers pointed out that the United States, with McCain’s enthusiastic support, had invaded Iraq only five years before. Washington had gone on to oust the existing government, occupy the country and install a new regime. Moreover, what Moscow did in Georgia looked a lot like what America did (admittedly in the twentieth, not 21st century) in Serbia: intervene in an existing separatist conflict, forcibly dismember an independent state and create a new country. Without the sanction of international law.

Few political leaders in Washington have been as reckless and ostentatiously clueless as John McCain. Personal heroism obviously does not translate into good judgment. If Russia was behind the Clinton hack, the released information confirmed what some of us already believed about the Clintons and their followers. That’s no cause for leaping to the kinds of conclusions that McCain is prone to embrace and promote.