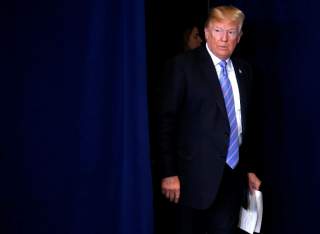 Reality check: the June 12 summit between President Donald Trump and North Korean leader Kim Jong-un will be a success because Trump will call it a success. Both leaders want it to succeed and both leaders love good publicity. The expert’s eye will not matter to them politically because it will be packaged and sold to key constituents as historic and unprecedented. Even if the summit yields no results or breaks down, both leaders have an out—they can spin it in any direction to save face or they can each blame the other for any breakdowns.

The noise, anticipation and skepticism will all crescendo as the date draws near. As risky as this summit is, and as unprepared as Trump may be, Washington still has a rare opportunity to make the best of “the water that’s already been spilled,” as the Korean saying goes. It would be a mistake not to take full advantage of the political space that has been created for the first time in six years. It’s a rare and unique opportunity to seek clarity directly from Kim himself—the sole decisionmaker in the top-down authoritarian North Korean regime—and to try to convince him directly to choose between his nuclear weapons or a brighter future.

The odds are stacked against Washington, which has failed to change Pyongyang’s strategic calculus over the course of several decades, and it is harder now with a more confident and savvy North Korea armed with nuclear-tipped inter-continental ballistic missiles. The challenges facing Washington are further exacerbated by an American president who may not fully understand the complexities of both the nuclear and regional components intertwined within this issue. But the art of negotiations means a chance to bargain hard with one’s eyes wide open, to try to make the impossible possible, and keep the diplomatic process alive to continuously test each other and avoid kinetic means.

Trump’s unconventional approach to international relations, especially when dealing with North Korea, means an unconventional outcome is probable on June 12. Managing expectations in all diplomatic endeavors is almost as important as the outcome because international negotiations are unpredictable. That is particularly true when Trump is approaching the summit as would any typical business tycoon who likes to get to know his counterpart first, chat over a game of golf, and make a move for a deal at another time. Even conventional diplomatic negotiations, after their proper groundwork has been finalized, rarely yield agreements in their first round.

Trump seems to want a “one-shot” deal and Pyongyang will aim for a phased approach to extend negotiations for as long as possible to test the president. Kim will likely try to game the system to receive some concessions along the way, build in exit ramps if he finds himself in a disadvantageous position, and keep his nuclear weapons for as long as possible. A potential deal can be called a “one-shot,” but the simple reality is that any deal needs to be implemented in phases, which is where the regime’s crafty manipulation is expected to thrive. The 2005 Six Party Joint Statement was essentially a one-shot deal, or a grand bargain, whose implementation required at least three agreements, although the multilateral process broke down before the second implementing agreement was fully carried out over disagreements on a nuclear verification protocol. South Korea’s conservative Lee Myung-bak wanted a “grand bargain,” but the Obama administration was against that approach.

This all means that Trump should not be expected to be—nor be molded into—a typical lead negotiator to a nuclear deal. Trump has already broken conventional diplomatic orthodoxy, as such, some unconventional thinking is needed on what could and should be accomplished in Singapore.

The June 12 summit in Singapore could result in a deal, no deal or a breakdown. So far, it is apparent that both leaders personally can’t afford a breakdown, so their rendezvous may result in a theatrical summit with uncertain next steps. If Trump and Kim are unable to strike a deal, then the best outcome would be for them to agree on meeting again, declare their next date and agree to maintain a positive and friendly atmosphere until then.

In order to reach an acceptable deal, or even an good one, the first order of business is to clarify key terminology and each other’s goals and intentions. That is especially true for the definition, scope and sequencing for denuclearization as well as on what exactly Kim Jong-un wants in the form of security guarantees. Pyongyang’s wish list tends to evolve even after agreeing to give the regime what it originally demanded.

The next order would be to agree on a joint vision statement that declares end goals and provides a starting point for nuclear negotiations. It would certainly be a big win if the statement contains details on denuclearization, verification and corresponding U.S. concessions. But all things considered, it would still be a good outcome if the two leaders agreed on key principles and outcomes, and built in pathways to negotiate details and methods by their senior diplomats and officials.

Any resulting document will be subject to scrutiny. But with little time left, the following basic principles might be a good place to start for a successful outcome for the unconventional Singapore summit:

1. Decided to respect each other’s sovereignty and undertake steps to fundamentally improve and normalize their bilateral relations in the interests of enhancing peace and security in the Indo-Pacific. As a crucial first step in undertaking a new direction in their relations, neither government will have hostile intent toward the other, and both governments confirmed to make every effort to build a new relationship free from past enmity. The United States affirmed that it does not possess and will not introduce nuclear weapons to the Korean Peninsula and has no intention to initiate an attack or invasion of the DPRK with nuclear or conventional weapons. The DPRK affirmed it will not use force of any kind when dealing with countries including but not limited to the United States, the Republic of Korea and Japan.

2. Agreed that their common goal is the complete elimination of nuclear weapons from the Korean Peninsula in a peaceful manner. The DPRK committed to abandoning all nuclear weapons and existing nuclear and ballistic missile programs and returning, at an early date, to the Treaty on the Non-Proliferation of Nuclear Weapons and to IAEA safeguards. Directly-related parties will discuss resolving the DPRK’s security concerns whose resolution will be achieved simultaneously with or soon after the dismantlement of the DPRK’s nuclear and ballistic missile programs. As a first step, the United States will modify its defensive, joint military exercises with the ROK by removing its strategic assets from them. The United States will also refrain from designating new sanctions throughout the denuclearization process and will lift existing sanctions proportionate to denuclearization steps taken by the DPRK.

3. Agreed the United States and its allies and partners will provide for and facilitate a brighter, safer and more prosperous future for the DPRK with the complete elimination of its nuclear and missile programs.

5. Agreed to work toward constructively reducing tensions on the Korean Peninsula and formally ending the Korean War by replacing the 1953 Armistice Agreement with a peace treaty and permanent peace regime established by directly-related parties at an appropriate time and separate forum. The United States and DPRK, in cooperation with their neighbors, aim to build a better future for all people on the Korean Peninsula, establishing durable peace for coexistence and leading to peaceful reunification led by the two Koreas. The ROK will be among the primary parties involved in peace negotiations.

7. The governments of the United States of America and the Democratic People’s Republic of Korea agreed to meet regularly at working-, high- and summit levels, and with other concerned parties, as needed to implement this vision expeditiously.

Some of the language above would be of no surprise to seasoned Korea watchers because they borrow from past agreements including the 2000 U.S.-North Korea Joint Communique and the 2005 Six-Party Joint Statement. Such recycling of key principles and outcomes is inevitable because fundamental bargaining chips and wish lists on both sides have not drastically changed over the decades. The new and ever more complex components now are programs that involve missiles and highly enriched uranium.