The Justice Department Goes All-In on Origins of Russia Probe 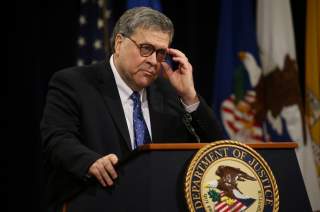 Add one more investigation to the list. Monday evening it was announced that Attorney General William Barr had selected John Durham, district attorney for Connecticut, to head an investigation into the origins of the Trump-Russia probe. The nearly seventy-year-old Durham has a long history of exposing abuses inside the National Security State, including the protection of crime boss Whitey Bulger by his FBI handlers and the CIA’s destruction of tapes featuring torture during interrogations. Durham will be working separately but in parallel to Justice Department Inspector General Michael E. Horowitz, who is looking into political bias, and District Attorney for Utah John W. Huber, who is doing his own independent investigation.

The primary goal of Durham’s investigation will be to examine FBI spying on the 2016 Trump presidential campaign. As previously detailed in the National Interest, in October of that year the FBI used raw intelligence to obtain a FISA warrant on campaign associate Carter Page, which then allowed them to collect information on the wider campaign. The attorney general came under fire for using the term “spying” to describe the surveillance of the Trump campaign but remained adamant that it was an accurate description. “My first job was in CIA, and I don’t think the word ‘spying’ has any pejorative connotation at all. To me the question is always whether or not it’s authorized and adequately predicated,” Barr told Senator Sheldon Whitehouse (D-RH).

Beyond campaign surveillance, it’s hoped by many longtime skeptics of the Trump-Russia espionage narrative that Durham will be able to track down just where the conspiracy began to percolate. He’ll have to accomplish this with limited powers, lacking much of the independence and discretion of a Special Counsel like Robert Mueller.

The narrative as it stands is that George Papadopoulos, a mid-level foreign policy advisor to the Trump campaign, made the acquaintance of Maltese Professor Joseph Mifsud in March 2016 while in Rome. Presenting himself a man with numerous contacts to the Russian government, Mifsud introduced Papadopoulos to a woman he claimed to be Vladimir Putin’s niece (she wasn’t) and a man he claimed was with the Russian Foreign Ministry. In late April, Mifsud informed Papadopoulos that the Russians had “dirt” on Hillary Clinton in the form of “thousands of emails.” The Mueller Report claims that Russian military intelligence (GRU) hacked the Democratic National Committee’s emails in the two weeks prior to Mifsud sharing this information, while others speculate that Mifsud was referencing the over thirty thousand emails deleted on Clinton’s private server while she was Secretary of State. In early May, Papadopoulos, while drinking at a bar, shared this information with Australian diplomat Alexander Downer, who then passed it on to his own government, who then informed U.S. authorities about the illicit connection. The FBI officially opened their probe in late July, while Papadopoulos has since denied he ever discussed the topic with Downer.

Mifsud is a mysterious figure with numerous foreign connections. The Mueller Report mentions his relationships to multiple Russian figures, including a former employee of the Internet Research Agency, but the names and precise details are redacted. Mifsud is also ingrained in Western intelligence. Claire Smith, of the United Kingdom’s Joint Intelligence Committee, worked alongside Mifsud while training Italian security forces. In February 2017 Mifsud was a featured speaker for a meeting of Global Ties, a nonprofit partner of the U.S. State Department. The Maltese professor claimed he was interviewed by the FBI that February while in the United States, a claim the FBI has never verified. In fall 2017, Joseph Mifsud disappeared and his whereabouts have not been confirmed since. The Daily Caller reported in fall 2018 that Mifsud was indeed alive and living somewhere under a false identity.

Other discretions have led to speculation among the president’s supporters. Stefan Halper, a former CIA official who in 1980 acted as a spy for the Reagan campaign on the Carter administration, was in London during the summer and fall of 2016. He had interactions with multiple Trump campaign officials, including George Papadopoulos, Carter Page, and Sam Clovis. His service as an FBI informant began in early July 2016, weeks before the official opening of the investigation. Halper is a close associate of the intelligence firm Hakluyt & Co., where Alexander Downer is a director. Both Downer and Halper are associates of Richard Dearlove, the former head of British Intelligence (MI6); Halper and Dearlove even taught a class together at Cambridge University. In fall 2016, when putting together his raw intelligence dossier on Donald Trump, former MI6 officer Christopher Steele sought counsel from Dearlove.

Furthermore, in August 2017, Glenn Simpson, cofounder of Fusion GPS (the intelligence firm that acted as an intermediary between Christopher Steele and his financiers), testified in a closed session of the Senate Judiciary Committee. During his under-oath testimony, Simpson said:

A “human source from inside the Trump campaign” would refer to a spy, possibly connected to a western intelligence agency. This testimony stood on the record until it was publicly revealed in January 2018, when Simpson said he had “mischaracterized” what Steele had told him and there was no human source. Prosecutor and National Review columnist Andrew McCarthy suspects Simpson’s original testimony may in fact be accurate.

President Trump’s supporters see this litany of secretive individuals with incestuous connections to U.S. and British intelligence services and are filled with suspicion. Some theorize of a plot to strangle Donald Trump’s insurgent presidential campaign while still in its crib. Others pour water on this kind of dot-connecting.

“I don’t think the investigation is a good idea. It will not show wrongdoing by the intelligence community,” said John E. McLaughlin, former deputy director of Central Intelligence. “I think it will show there was sufficient information to justify a probe to find out what if anything was going on; probes like this are not done to establish guilt; they are done to find out if there is anything worth pursuing further.”

While McLaughlin believes the new investigation is unnecessary, he praised Barr’s choice of personnel. “John Durham is a solid professional and non-political investigator. The whole thing has the feel of people in the administration wanting to tell the boss that something is being done to respond to his obsession—but with the expectation that it will not in the end support his conspiracy theory. In the meantime, it allows Trump to crow about it,” he told the National Interest.