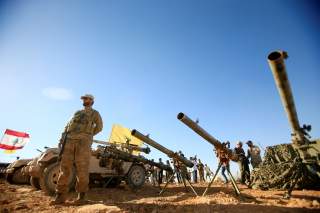 Pollack’s assertion that technological development is not directly related to battlefield requirements calls for greater scrutiny. On its face, Pollack’s argument seems credible enough, until one accounts for the many systems that were developed specifically to meet the military’s needs. These include stealth and guided missiles, as well as the Global Positioning System, the thermobaric weapon and the Internet. Apart from missiles, which the Germans first employed in World War II, all of the others derived from the efforts of the U.S. Defense Advanced Projects Agency, or, in the case of stealth, from the U.S. defense industrial base, specifically to meet military needs.

Having characterized technological development as a subordinate factor in military performance, Pollack goes on to assert that “…what matters is the extent to which those [culturally-driven] traits mesh with the technology and organization (including the tactics) being employed” by armies at any given time. After drawing on historical examples to prove his point, Pollack then argues that

[t]he job of the general is now to... turn the tactical victories won by his subordinates into strategic victories (largely by breaking through the enemy’s front lines, routing his reserves and rear area services, and either surrounding or causing the logistical and psychological collapse of the enemy army).

Once again, Pollack’s reliance on dated material undermines his argument. His primary source is Stephen D. Biddle’s fourteen-year-old study, Military Power: Explaining Victory and Defeat in Modern Battle, which focuses on the interaction between force employment and materiel, and is not necessarily tied to the twentieth-century operational objective of breaking through enemy lines. It is now widely recognized, however, that while the type of warfare Pollack describes may have been relevant to any conflict between NATO and the Warsaw Pact, or even between the U.S.-led coalition and Iraq in 1991, it hardly represents the manner in which military forces expect to fight in the twenty-first century. Operations along the Forward Edge of Battle, or its successor, the Forward Line of Own Troops, were Cold War concepts. They are unlikely to be relevant even in defending against a hypothetical Russian advance into the “Suvalki Gap.”

Having postulated the importance of culture, Pollack then offers a lengthy and digressive discourse on the nature of culture generally and its influence on human behavior. In so doing, he ventures into areas far beyond what a reader interested in Arab military behavior might expect, arguing, for example, that “[c]ontrary to the common wisdom, religions are essentially products of a culture, or even vessels of it.” Pollack admits that “culture can be a nebulous subject”; that he treats it “in a more precise and clearly delineated fashion than it realistically deserves”; and that “[t]o some extent this ‘reductionism’ may have distorted my treatment of culture.” So how can Pollack be so certain that culture is truly the primary factor underpinning Arab military performance?

Pollack contends that there are a number of singular cultural traits that best explain poor Arab military performance. The first of these is conformity, which, Pollack asserts, stifles innovation and creativity. He cites studies of Egyptian and Jordanian village life, and quotes the Syrian poet Ahmed Ali Sa’id that “[i]nnovators have been silenced, while static values and attitudes have been preserved.”

Pollack then highlights a second cultural factor that is pervasive throughout the Arab world: “the forces of honor and shame” that foster centralization of and deference to authority, and the passivity among subordinates that accompanies such behavior. He cites various studies to prove his point, noting the importance of authority in Arab households. One such study asserts that “[t]he youngster learns early in life to obey the father’s orders without questioning them...”

Group loyalty is a third characteristic that Pollack argues is endemic in Arab culture. He bases himself on numerous studies such as one that asserts that “[i]ndividualism has little positive value in Egyptian society” and another that found that in rural Jordan “[l]oyalty to relatives is expected at all times and under all circumstances.” Yet another cultural characteristic, according to Pollack, is the manipulation of information. Again, he cites numerous studies, including one that found that Arab students at American universities cheat more than their American counterparts.

What Pollack, basing himself on some Middle East scholars, terms “atomization of knowledge,” is yet another Arab characteristic. The term is meant to connote the inability of Arabs to integrate details into “a composite and well-organized whole.” He cites a report from the RAND Corporation that found that Arab students performed well on tests involving memorization, but poorly on tests based on analogies, which measured the ability to generalize. Finally, again citing a variety of studies, Pollack notes that Arabs demonstrate personal courage, but are ambivalent toward manual labor and technical work.

Apart from personal courage, which obviously is an advantage in warfare, Pollack argues that all of the aforementioned characteristics undermine the ability of Arab armies to succeed on the battlefield or in air combat. Honor and shame, for example, “appear perfectly correlated with remarkable passivity, especially among subordinates, demonstrated by modern Arab armed forces.” The desire “to avoid giving offense and to shift blame through secrecy, exaggeration, deception, or dissembling mimic the poor transmission of information along the chain of command displayed by one Arab military after another.” Moreover, a predilection toward manipulation of information has led superiors in the Arab chains of command to withhold information from subordinates.

Taken together, Pollack argues, these cultural characteristics explain the reluctance of Arab forces to employ maneuver at both operational and tactical levels. They also explain why Arab armies cannot innovate or conduct ad hoc operations as circumstances change; rather they can only operate well, if they ever do, when carrying out set piece battle plans. These factors, together with “an ambivalence toward technical subjects” explain Arab problems conducting combined arms and joint, air-to-air and air-to-ground operations. On the other hand, Arab culture has also fostered strong unit cohesion in battle, as well as individual bravery.

Pollack does concede that in one respect Arab culture does not explain military behavior, namely, certain technically-related operations that Arab have indeed demonstrated some capability, despite what he asserts is a predilection against technical subjects and work, as well as an aversion to manual labor. While Arab militaries have achieved a poor record in maintaining their equipment, they have “defied all expectations… in the areas of logistics and combat engineering.” His vague conclusion is that “something else was going on that helped out Arab armies.” He therefore argues that that culture, underdevelopment and, related to it, a lack of education, or at best rote learning, has its greatest impact on the poor performance of the lowest ranks, whereas politicization has its greatest impact on the highest ranks—namely colonels and general officers, who tend to be better educated and somewhat less prone to culturally-driven constraints. He might have added that while not all Arab graduate engineers actually enter the engineering profession—he notes that the degree itself is among the most sought after in the Arab world—it is possible that Arab combat engineers not only earned engineering degrees but did so with some proficiency.

Pollack also demonstrates that cultural norms as they apply to education in wider Arab society have had an especially powerful impact on Arab training methods and manuals. In his view, it could not have been otherwise. For, as he concludes, “it would have been remarkable if Arab militaries trained their men in a manner that differed from the method of teaching in the broader society.”

The educational methods of a given society need not influence military training, however. For example, American basic training, especially in the Army and Marine Corps, differs markedly from that of the way the rest of American society is educated. Again, American military analysts have long noted that Latin American navies, for example, operate only “by the book,” and show little initiative and imagination; is Latin American educational culture identical, or even similar, to the manner in which Arab children are educated? Though he addresses non-Arab military performance with respect to politicization and economic development, he does not do so when discussing culture. The presumption is that Arab culture and its impact of the military is unique, but Pollack adduces no supporting evidence in that regard.

To further underpin his case, Pollack looks at the linkage between Arab culture and the experiences of civilian organizations in the Arab world, both governmental and non-governmental. Basing himself on numerous studies of Arab organizational behavior, Pollack demonstrates that Arab state bureaucracies exhibit the same culturally-driven behaviors as their military counterparts. The same applies to behaviors in factories, universities, corporations and small businesses. And, as with the military, there is a variance between the impact of culture and other factors on lower levels of bureaucracy (or businesses, or universities) and upper managerial levels.

Pollack’s overall thesis certainly explains Arab military performance in the twentieth century. What is less evident is whether the various factors he identifies as the causes of Arab military failures can be weighted in the same way in the present or the future as they were in the past. He may speak of culture and military behavior appearing to be “perfectly correlated,” but runs no regressions, and never derives any coefficient of correlation, much less a perfect one.