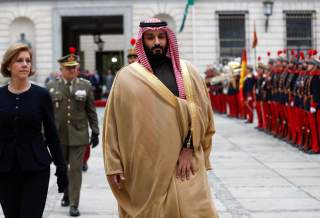 The fate of Saudi journalist Jamal Khashoggi two weeks ago in Istanbul has punctured the myth of Mohammed bin Salman (MbS). After three years of gambles and missteps, both at home and abroad, Saudi Arabia’s crown prince may finally experience serious repercussions for his presumed role in Khashoggi’s apparent abduction and death.

Khashoggi walked into the Saudi consulate in Istanbul on October 2 to receive paperwork to enable him to marry his Turkish fiancée. He has not been seen since. The Turks have accused a Saudi team of fifteen men of murdering Khashoggi, dismembering his body with a bone saw, and smuggling his remains back to Saudi Arabia. Turkish authorities claim to have given the U.S. audio and visual footage of Khashoggi’s torture and death. After an initial round of weak and implausible denials, Saudi Arabia is now reportedly preparing to admit that he was killed in “an interrogation gone wrong.”

The fallout in the United States, the Kingdom’s protector since 1945, has been immediate. In the political realm, even reliably pro-Saudi politicians are promising a reckoning. Sen. Lindsey Graham, a longtime supporter of Saudi Arabia, stated this morning that MbS ordered the murder of Khashoggi and concluded that “this guy’s got to go.” Sen. Marco Rubio, always a weathervane of the GOP foreign-policy consensus, said that U.S.-Saudi relations cannot remain “business as usual.” And President Donald Trump promised “severe punishment,” albeit in a statement that he quickly caveated.

The economic consequences are potentially far more severe. Mohammed bin Salman’s greatest goal is Vision 2030, an enormous economic effort to terminate Saudi economic dependency on oil. He, and most of the Saudi leadership, knows that the writing is on the wall for their country. Saudi Arabia’s profligacy, and the implicit bribery of its citizens with subsidies and salaries from oil profits, is unsustainable. The Kingdom ran a budget deficit of $52 billion last year, equivalent to 7.3 percent of GDP. Fracking and other technological advancements spell the end of high oil prices while apprehensions about climate change are prompting countries to conserve energy. As the former Saudi oil minister, Sheik Ahmed Zaki Yamani, once warned OPEC, “The Stone Age didn’t end because we ran out of stones.”

Vision 2030 encompasses a wide variety of projects but almost all will rely upon international expertise and funding. Though Saudi Arabia is planning to invest $500 billion in the new city of Neom, it cannot do this alone. The Saudis claimed foreign direct investment growth of 40 percent in the first quarter of 2018—though that was up from its lowest level in fourteen years. The planned initial public offering of state oil giant Aramco, billed as the largest stock flotation in history, has been delayed indefinitely.

As a result of Khashoggi’s disappearance Saudi Arabia has suffered immediate symbolic consequences. Already disturbed by MbS’s decision to imprison and shake down some of his country’s wealthiest investors in 2017, business leaders are now fleeing association with the Kingdom. The Future Investment Initiative in Riyadh, dubbed “Davos in the Desert,” meets next week. Since Khashoggi’s disappearance, such business luminaries as Virgin’s Sir Richard Branson, J.P. Morgan Chase CEO Jamie Dimon, BlackRock CEO Laurence Fink, and Uber CEO Dara Khosrowshahi have announced that they won’t attend the conference. Media partners including Bloomberg, CNN, the New York Times, and the Financial Times also pulled out. Even the stars of World Wrestling Entertainment are uncomfortable performing in the Kingdom.

Just a few months ago, the mainstream narrative about MbS and Saudi Arabia was very different. For his sweeping economic and social ambitions, and for making token concessions like allowing women to drive, MbS was feted as a kind of Arabian Ataturk. He was, we were told, pulling his monarchy into the twenty-first century for the good of both its own people and the world. MbS received an encomium from Thomas Friedman and met with Amazon’s Jeff Bezos, Google’s Sergey Brin and Sundar Pichai, and Apple’s Tim Cook. Rupert Murdoch hosted a dinner for him. Goldman Sachs’ Lloyd Blankfein sat down with MbS and then tweeted out his support for the crown prince.

And yet the reality is that since MbS’s ascension in a swift internal struggle, he has been the author of a series of inept foreign-policy moves. The Saudi-led war in Yemen has been a bloody stalemate since it began in 2015 and has probably cost the Kingdom over $100 billion. The brief kidnapping and coerced resignation of Lebanese prime minister Saad Hariri was bizarre and ineffective. The blockade of Qatar has achieved nothing besides pushing a wealthy Gulf Cooperation Council (GCC) neighbor closer to Turkey and Iran. And Saudi Arabia’s recent diplomatic spat with Canada is in some ways its most impetuous foreign act. In response to fairly mild criticism of its human rights record, Saudi Arabia expelled Canada’s ambassador, froze all trade, and suspended the scholarships of sixteen thousand Saudi students in Canada.

The alleged Saudi detention and killing of Khashoggi, so publicly and with such thin cover, betokens a new level of audacity. Whether it had been long-planned or was a reaction to Khashoggi’s launch of a new group, Democracy for the Arab World Now (DAWN), this act was a huge miscalculation. Despite his U.S. tour and 4 a.m. conversations with Jared Kushner, MbS clearly did not understand the U.S. political scene nor did he grasp the ramifications of killing a Washington Post contributor who was a friend to many in American media and policy circles. Now Mohammed bin Salman has put his entire grandiose vision at risk for the sake of silencing a moderate critic.

A real U.S. break with Saudi Arabia is unlikely. America has too much invested in the Saudis, and the Saudis have too much invested in the United States. Saudi Arabia’s Public Investment Fund is “one of Silicon Valley’s biggest swinging checkbooks,” with $90 billion of current and future tech investments through SoftBank’s Vision Funds. The United States has enormous leverage over the Saudis through arms supplies, as Bruce Riedel has pointed out. We are unlikely to use it.

The most likely outcome is that as pressure builds and the U.S. Congress prepares to levy real sanctions on the Saudis, a convenient minor prince will be found. This unfortunate person will shoulder the blame for ordering the murder unbeknownst to the Kingdom’s benevolent heir apparent. Whether decapitated in public or consigned for years to a luxurious oubliette, an obscure figure or two will take the fall. Mohammed bin Salman has shown no reluctance to imprison family members. And President Trump has already speculated about “rogue killers,” effectively endorsing a thin Saudi alibi before it is even issued. Instead, Trump should be reevaluating America’s relationship with Saudi Arabia before it creates a fresh disaster in the region.