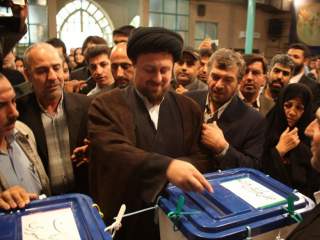 Hassan Khomeini, grandson of noted poetry enthusiast and founding father of the Islamic Republic of Iran Ayatollah Ruhollah Khomeini, has announced he’ll be running for his country’s Assembly of Experts. His announcement further raises the stakes of the country’s February 2016 legislative elections, which already have the potential to be a pivotal moment in the nation’s history. Yet there’s a tough, uncertain road ahead.

The younger Khomeini has extensive ties to the Islamic Republic’s reformist faction, which has been squeezed out of the political system in recent years. The Khomeini name and the elite connections that come with it lend him a measure of protection that other members of this faction don’t enjoy; it will be more difficult for hardliners to block his candidacy. And who gets blocked will likely be as important in shaping the election’s outcome as who gets the most votes. If centrists and reformists are allowed to run and allowed to win, odds are good that they’ll make big gains in both the Assembly of Experts and the Islamic Consultative Assembly (the Majles, Iran’s parliament). The latter could become a vital center of political strength for the moderate president Hassan Rouhani, who has been facing stronger political headwinds ever since the finalization of the nuclear deal. The former, the Assembly of Experts, oversees the Supreme Leader and, in the event of his death or resignation, chooses his successor. Since the Assembly of Experts is only elected every eight years and Supreme Leader Ali Khamenei is already seventy-six and prone to health scares, next February’s victors may very well set Iran’s course for decades.

Yet the outcome of the vote and of the younger Khomeini’s campaign is far from certain. The Guardian Council weighs candidates’ qualifications, and its use of this power has often been thoroughly politicized. They only approved eight candidates for the 2013 presidential elections, blocking both a former president, Ayatollah Hashemi Rafsanjani, and the then president’s closest adviser, Esfandiar Rahim Mashaei. No reformists were allowed through, fitting a broader pattern of hardline interference with their political activities since the disputed 2009 presidential elections. The current government appears concerned that potentially friendly candidates will be blocked in the upcoming elections, too, with President Rouhani repeatedly calling for a more restrained Guardian Council. The sharp replies that his remarks drew from prominent hardline figures and the Supreme Leader himself suggest that Rouhani may not get his wish. It’s quite possible that Khomeini himself will be obstructed, too. Multiple Khomeini grandchildren have tried to run for the Majles in the past and were disqualified; Hassan Khomeini, at just 43 years of age, would be relatively youthful and inexperienced among the graybeards of the Assembly of Experts. Still, given that Khamenei himself became Supreme Leader with limited religious qualifications, the Guardian Council’s decision regarding Hassan Khomeini should be read as a matter of power, not of principle.

And it is the shifting balance of power that is the real obstacle to Khomeini and his reformist friends. Khomeini’s connections and heritage have made him (and his son Ahmad) some of the only people in Iran who can openly and publicly associate with reformist ex-president Mohammad Khatami. Since February, there has been a ban on publishing images of or quotes from Khatami, yet Hassan Khomeini has been photographed by his side at several public events, and the teenage Ahmad has repeatedly published photographs with him on his Instagram page. On Friday, Ahmad Khomeini’s Instagram also appeared to announce another Assembly of Experts candidacy: that of his grandfather, Ayatollah Mousavi Bojnourdi. Bojnourdi had himself been a close Khatami associate, and has expressed more moderate views on the roles of women and the death penalty (on Israel and the rights of Iran’s disenfranchised Bahai minority, however, he’s not exactly a progressive). Yet the restrictions related to Khatami are now touching the elites, too: on Tuesday, Mahmoud Doaei, editor of the respected newspaper Ettelaat and a onetime member of Ruhollah Khomeini’s inner circle, was indicted for breaking the ban by publishing a photo of Khatami and quotes from a recent interview with a Lebanese newspaper. In such a context, it’s not hard to imagine the younger Khomeini’s candidacy could be quashed.

Yet even if he and his allies prevail, that doesn’t mean Iran will automatically swing toward change. Iran’s clerics and constitutional bodies aren’t the only sources of power. Reformists held both the presidency and the Majles between 2000 and 2004, yet the Guardian Council, the judiciary, the Ministry of Intelligence and Security and other hardline elements emasculated reformist efforts with a mix of restrictions, threats and violence. (The latter threat may have already touched the Khomeini clan: Hassan’s father Ahmad died “in mysterious circumstances” in 1995.) The Rouhani administration has seen a spike in executions and the detention of numerous prominent Westerners, including Washington Post correspondent Jason Rezaian and businessman Siamak Namazi, along with a wave of arrests of Iranian journalists believed to be sponsored by the intelligence branch of the Revolutionary Guard. These actions are inconsistent with the rhetoric and stated goals of the Rouhani government, and are almost certainly an intentional policy by other elements of the Iranian regime to keep Rouhani in check.

Evoking his grandfather’s warnings against the security state, Hassan Khomeini has said that “the presence of a gun in politics means the end of all dialogue.” He and his father-in-law, Ayatollah Bojnourdi, are about to put that claim to the test.