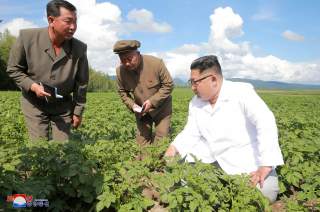 Setting the stage for Kim Jong-un’s extraordinary summits with South Korean president Moon Jae-in and President Donald Trump, was the “Peace Olympics” in Pyeongchang, South Korea. One of the breakout celebrities of the Olympics was not an athlete, but Kim Yo-jong, the younger sister of North Korea’s Supreme Leader Kim Jong-un. As the Deputy Director of the Korean Worker’s Party (KWP), Kim Yo-jong was the highest-ranking North Korean government official to visit South Korea before her brother’s visit a few months later. Her charm offensive was wildly successful; South Korean media preferred to “discuss her freckles rather than her place on the U.S. Department of Treasury’s sanctions list for human rights abuses.”

Nonetheless, Kim Yo-jong’s private life has been the subject of speculation because of its intersection with North Korean politics. In 2015, she was rumored to have married either Choe Song, son of the secretary of the KWP, or an unnamed man, who was thought to be the nephew of North Korea’s Foreign Minister Ri Su Yong. Whichever of these two men she married would be a powerful husband because both are key to keeping the Kim family in power and North Korea afloat as a country. Choe and Ri’s nephew are also believed to be central figures in running the nation’s criminal powerhouse.

Office #39 is the key government agency for managing North Korea’s military proliferation, currency counterfeiting, drug trafficking and a variety of other illicit activities. The work of Office #39 explains why, in the words of a high-ranking regime defector, “the same economy that cannot produce a usable toothbrush is now armed to the teeth with nuclear weapons.” Office #39 was the product of the long-range vision of North Korea’s founder Kim Il-sung, who in the 1970s foresaw the weakness of the Soviet system, and tasked his son, Kim Jong-il, to set up an illicit economic infrastructure that now brings in billions of dollars annually for Kim Jong-un’s coffers. Central to the Kim dynasty’s ability to control its totalitarian regime has been a “court economy,” akin to that practiced by an absolute monarch. To prevent coups over the three generations of Kims, Office #39 has provided the funds to reward military, security, government and party elites. In addition to supporting internal regime stability, Office #39 acts to provide the funding for North Korea’s weapons programs.

Despite the summitry and pledges to denuclearize the Korean peninsula, there is no indication that North Korea is willing to shed its criminal activity by disbanding Office #39. So intertwined are the regime’s illegal activities and security interests that North Korea is as unlikely to denuclearize as it is to “decriminalize” its foreign affairs and economic practices.

Crime as the DIME

Beyond the marriage of Kim’s sister to either of two men linked to Office #39, two other events during Kim’s short rule have revealed the critical importance of that office. In one of Kim Jong-un’s most ruthless purges of the ruling elite, he ordered the execution of his uncle Jang Sung Thaek by anti-aircraft fire in 2013. Jang was seen as the second most powerful official in the country who reputedly wanted to reform its economic system. However, it is believed the “treason” for which he was executed was due to the likelihood that the reforms would reduce the profits and power of Office #39. The second key event occurred in September of 2016 when the South Korean press reported that Office #38 merged with Office #39 to become only Office #39. Office #38 was responsible for overseeing the country’s international business interests that earned money for the military from foreign currency, hotels and trade. By merging Office #38 with Office #39, Kim Jong-un was able to streamline the infusion of illicit money into the pockets of the elites to keep them loyal and inject additional cash into the country’s nuclear weapons program.

For North Korea, crime has been incorporated as an important component of statecraft. It has infused its other instruments of power—diplomacy, information, military and economic (DIME)—with criminal activity. Although under exceptionally tight international sanctions, North Korea has adeptly used Office #39 to continue to procure money for the Kim regime by developing a sophisticated illicit financial network. Office #39 relies on four key components: DPRK’s military and diplomatic personnel, shell companies, third-party middlemen and complicit governments.

This sprawling constellation of income earning activities has security implications beyond supporting the regime’s nuclear weapons program. North Korean manufactured methamphetamine and heroin have been found around the Asia-Pacific region. Pyongyang’s willingness to provide light arms in exchange for hard currency has also fueled armed conflict in Syria and Burma. Furthermore, its money laundering has corrupted financial institutions, and it has trafficked its own citizens across state boundaries for use as conscript labor. Kim’s nuclear weapons are only one facet of many security threats emanating from North Korea. North Korea’s criminal statecraft must be tackled as vigorously as its nuclear weapons program. And, the time might be right to do so.

Trouble in the Workers’ Paradise

Despite the success of Office #39’s efforts to evade sanctions and continue to earn money for the regime, Kim’s brutality and the profound corruption of the regime may lead to Office #39’s undoing. Kim’s harsh purging of long-standing regime leaders and killings of his family members has instilled a great deal of fear among the elite who work within the shadow economy of Office #39. Endemic corruption has led to top officials stealing money from the regime. The combination of fear and corruption explains the recent defections of several high-ranking North Korean officials who used their positions in handling lucrative portions of the regime’s illicit overseas network to take millions of dollars along with them.

Increasing pressure on the regime’s criminal activities means increasing pressure on the four critical components of its network, particularly on third-party middlemen and complicit governments. In fact, the two are often linked. Third parties are often ignored or even encouraged by governments to assist North Korea. Pressure on China, particularly on its banks that launder North Korean money, facilitated the regime’s willingness to engage in summitry. However, the presence of Li Zhanshu, the third highest-ranking member of the Chinese Communist Party, at last month’s celebratory parade of North Korea’s founding may signal that China’s pressure will be easing.

The seriousness of Kim’s willingness to denuclearize and open a new era of relations with the wider world should be viewed through what happens with Office #39. The regime’s security rests as much on its possession of nuclear weapons as it does on it use of crime as the DIME. Shuttering Office #39 is just as crucial to international security as the country’s shedding its nuclear weapons program.

Bruce E. Bechtol, Jr. is an award-winning professor of political science at Angelo State University and a retired Marine. He is the author of the books North Korean Military Proliferation to the Middle East and Africa: Enabling Violence and Instability (University Press of Kentucky: 2018), North Korea and Regional Security in the Kim Jong-un Era: A New International Security Dilemma (Palgrave Macmillan: 2014), and The Last Days of Kim Jong-Il: The North Korean Threat in a Changing Era (University of Nebraska Press: 2013). He is also the author of more than thirty articles on North Korean international-security issues.

Paul Rexton Kan is a professor of national security studies at the U.S. Army War College. He is the author of the books, Drugs and Contemporary Warfare, Cartels at War and Drug Trafficking and International Security as well as numerous articles on the intersection of deviant globalization and armed conflict.