Lebanon Left Behind: What America Can Do to Save Beirut 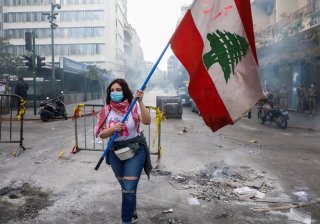 The crisis in Lebanon is growing worse. The Lebanese Pound has lost 90 percent of its value, there are strict limitations on bank withdrawals, and many Lebanese depend on hard currency remittances from relatives abroad. Meanwhile, commodities are in short supply, with long lines at gasoline situations that are patrolled by security forces to prevent outbreaks of fighting among frustrated customers. Public electricity is spotty, as blackouts become a regular part of daily life. The situation is bad enough now in the hot Lebanese summer, but it will turn into a catastrophe in the coming cold winter.

The international community has been providing humanitarian relief, but too much of it ends up siphoned off into the corruption networks that rule Lebanon. Some of the aid is smuggled into Syria, circumventing sanctions against the Assad dictatorship, while turning a considerable profit for criminal enterprises, including Hezbollah. More humanitarian relief is needed, but it should be run through reliable international institutions or through closely monitored non-governmental organizations if it is to support the Lebanese people and not the mafia-like syndicates. There are also considerable opportunities for non-profit and philanthropic funding for the important Lebanese infrastructure such as hospitals and universities. The survival of these institutions is vital for the country’s future.

While such support remains indispensable, it is ultimately only patchwork. What is needed are significant structural and political reforms that can only come about if the international community, and above all the United States, apply targeted and unrelenting pressure. But so far, Washington barely seems to notice the burgeoning crisis. America’s Middle East policy leaders have foolishly placed all their bets on the Vienna negotiations with Iran and are ignoring the regional hotspots that deserve attention. Humanitarian urgency is not the only reason for Washington to take note. Vital interests are at stake: the greater the disorder in Lebanon, the greater the likelihood that Islamist terrorism will erupt, new streams of refugees will destabilize American allies, and Iranian and Russian influence will grow, as the United States recedes. It is high time for American engagement—but how should it be engaged?

There is clearly no political appetite in Washington for costly foreign initiatives, especially not in the Middle East. Yet even as it eschews large entanglements, like the Iraq War, it ought to develop paradigms better than full-scale abandonment, as now in Afghanistan. Lebanon is the in-between test case for U.S. foreign policy. There are important ways that the United States can take steps to move Lebanon toward stability without outsized costs. But Washington has to show the will and the attention span to face the challenge.

First, the United States has a history of providing training support for the Lebanese Armed Forces (LAF), which has achieved some notable success in the fight against Islamist terrorism. In addition, the LAF is one national institution that commands extensive respect, and the military-to-military relationship has produced strong individual ties to the United States. In the current crisis, the LAF will grow ever more important in maintaining order. Unfortunately, Washington has been reducing and downgrading its advisory role. The result will be deleterious both to the LAF, as it loses out on American support, and to the relationship between the two militaries. This trajectory should be reversed.

Secondly, the United States can impact the political realm, where a political class, uniformly recognized as corrupt, has a stranglehold on governance, preventing the reforms that could unlock International Monetary Fund funding. Significant pressure could be brought to bear on Lebanese leadership if Washington were to make effective use of sanctioning authority under the Global Magnitsky Act, which can penalize corruption as much as human-rights violations. The prospect of severe sanctions, as well as the public shaming associated with them, might move select members of the political class toward taking the reform measures they have so far resisted.

Those measures will involve opening the budgetary books and introducing transparency into government expenditures. Parts of the kleptocracy will resist, no doubt, but some skillful negotiation on the part of American diplomats and the Treasury Department, where the relevant authority resides, ought to yield results.

Yet even merely publicizing the threat of sanctions and the evidence of corruption would have a third positive effect, by contributing to the vitality of the growing political opposition in anticipation of next year’s elections. The more the Lebanese citizens learn about the details of the corruption, the more the traditional politicians will lose the voter loyalty that has kept them in power for too long. New leaders are stepping forward, from the social movements, from business leadership positions, and from distinguished political families. They deserve support.

Fourth, the elephant in the room remains Hezbollah, the ultimate force in Lebanese politics that keeps the corrupt class in power. On the one hand, it participates in corruption, benefiting from smuggling operations and the drug trade, behaving like an international criminal network, comparable to the Revolutionary Armed Forces of Columbia. On the other hand, Hezbollah also acts as a proxy agent of the Iranian regime. Talking of Hezbollah, Lebanese themselves refer to it as “the occupation,” serving the needs of Tehran and not the Lebanese people.

To solve the Lebanese crisis and to prevent extensive humanitarian suffering in the coming year, the Hezbollah problem has to be addressed. One key goal has to be the implementation of the terms of the 1989 Taif Agreement that ended the Lebanese Civil War, which stipulated the disarming of all militia. That has to apply to Hezbollah. Moreover, the future of Lebanon is directly tied to the outcome of the Vienna negotiations over the “Iran Deal.” If the United States lifts sanctions on Iran, the resulting economic benefits will enable Tehran to increase funding to Hezbollah which in turn will make matters worse in Lebanon. For Washington to sign off on a new agreement with Iran that does not prohibit funding for proxy forces, like Hezbollah, would be tantamount to trading away Lebanese sovereignty in order to appease Iran. American foreign policy ought to be held to higher standards than that.

Russell A. Berman directs the Working Group on the Middle East and the Islamic World at the Hoover Institution. His opinions here are his own.