Is the Left Trying to Get Trump Reelected? 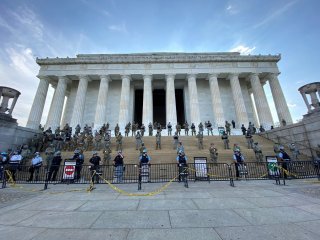 The protesters who took to the streets after the killing of George Floyd have something in common with Donald Trump: they share an interest in his re-election.

The protesters want nothing more than to see Trump defeated, of course. But for the last 15 years, American politics has seen new social movements rise in response to a presidential administration they oppose and fade away once a new president is elected. Remember the antiwar movement of 2006? It didn’t survive the Obama administration. The Tea Party movement and its calls for restraint on government spending haven’t been a force since the election of Donald Trump. And if Joe Biden wins in November, what are the odds that woke young Democrats will be protesting outside his White House the next time a black man dies in police custody?

The predictable next turn in American politics, should Biden win, will be the rise of a new right-wing opposition. What form it will take is anybody’s guess—perhaps recrudescent neoconservatism, after the “libertarian moment” of the Obama era and the nationalist turn under Trump? Given Biden’s age—he would turn 80 in his second year in office—youth will probably be a theme Republicans try to develop. But the new opposition movement could take any form, depending in part on what events provide the occasion for organizing.

A Biden administration would have no shortage of big events to deal with: the post-COVID world order, including relations with China, would be enough by itself, as would the post-COVID future of the U.S. economy. But there will be much more besides, and making a priority of fighting with police would have obvious risks. A law-and-order backlash from the right is easy to envision. And the demands of current protesters are classic instances of idealistic overreach with the potential to create nightmarish results once implemented. Like the Tea Party and the antiwar movement, the movement for a crackdown on cops is only plausible so long as there is no need to take responsibility for the inevitably imperfect policy solution. The real politics of war, spending, police reform, or, say, healthcare reform is messier than the ideals of protesters can ever accommodate.

Thus, if the protests wind up helping Trump come November, the president’s re-election may paradoxically be a godsend to the activist left as well. That’s not a reason for the protesters to vote for him, of course—not any more than it’s a reason for Trump supporters to hesitate about his re-election. Politics is still about winning power; it’s just that being out of power has certain compensations of its own. Opposition is always easier than governing.

Trump’s re-election prospects are better than his lackluster poll numbers suggest. Yes, Biden leads in most national polls. But recent state-level polling shows a tight contest, which is all the more telling in light of the great burden that the COVID crisis and Floyd protests have imposed on Trump in recent weeks. End-of-May battleground polling by the Democrat-leaning Change Research and CNBC finds Trump ahead in Pennsylvania by 4 points, up in Arizona by a single point, tied in Wisconsin, and trailing by three points in Florida, two points in Michigan, and one point in North Carolina. The good news for Trump here is that he appears to have a good shot at winning Pennsylvania for a second time and he remains competitive in the upper Midwest—the winning map he drew in 2016 is plausible in 2020 as well. After the coronavirus and the nationwide riots, things can only get better, or so the president’s campaign must hope. A bit of economic recovery, relief at a return to normal—or “normalcy,” as Warren Harding called it after the traumas of World War I.

The millennials-and-younger who seem to comprise the bulk of the protesters want to believe that America is ready to become one vast college campus. The police forces attached to colleges and universities are not supposed to enforce the law too thoroughly, lest they scare away paying customers. Even those universities with such large endowments that they don’t need any income from tuition have an overwhelming interest in appeasing the demands of student radicals, in part because they lend a certain elite fashionability to a school, and in part because administrators themselves are usually progressives and see in student rebels a romantic reflection of their own youth.

Young progressives don’t see why all of America can’t be like the campus—where opinions deemed insensitive are not allowed in the student newspaper or the lecture halls, where all expenses are covered (by loans or parents), and where authority is only affirming rather than threatening. The worst that can happen to you is expulsion. This is how the workplace should be, and this is how Chicago and Baltimore, Minneapolis, and D.C. should be, too. So defund and disband the police, or at a minimum open them up to more civil suits by getting rid of qualified immunity and break up the police unions. Ideally, legal proceedings should be as close to campus Title IX proceedings as possible. If this makes it impossible for police to use force, or discourages them from doing so for fear of complaints, well, that’s the whole point. A campus doesn’t need cops.

Campus America is the political ideal of a generation. And the college-educated professionals who subscribe to this ideal may have little to fear and much to gain from it. The losers will be, as always, the less well-off, especially black Americans, whose lives are significantly more threatened by criminals than by police officers. “Black Lives Matter” is a slogan that doesn’t apply to black-on-black crime, certainly not with anything like the force it applies to the rarer instances of white-on-black crime and police abuse. This doesn’t matter to the socially awakened young elite of today—how many of them ever plan to set foot in a place like Ferguson, Missouri? See no evil, hear no evil.

In decades past the scenes of arson and looting that followed the Floyd protests in many cities would have driven voters to a Richard Nixon or Ronald Reagan—or a Donald Trump. The Campus America kids think the country has changed, and their parents and grandparents will now see the police as bullies who sadistically pick on their always well-meaning if sometimes troubled and delinquent, sons, and daughters. Older voters may in fact have other reasons for drifting toward Biden, including reasons diametrically at odds with the young—such as a sense that Biden will make a tough as well as a competent leader. Whether Biden can balance these different demands will be a test of his mental flexibility. So far he’s seemed inclined to campaign as his old self, and he didn’t lose any appreciable numbers of black voters in the primaries by doing so. Quite the contrary: black voters may have been especially drawn to his record on crime. They are its primary victims, after all.

But the general election will be a trickier proposition—Biden will be stuck with Campus America whether he wants it or not. He needs young voters as well as black Americans if he’s to recreate the Obama coalition. His running mate will inevitably change the ideological mix of the ticket, too. If Trump wants to make Campus America and its hostile attitude toward police an issue in November, he’ll have an easy time of it. If he wins, Campus America will stick around. If he loses, it will lose momentum on the streets—though it probably won’t lose its luster in the minds of the young elite. The campus is the institution that made them, and they yearn to remake the world in its image—no matter the price less privileged American must pay.

Daniel McCarthy is the editor of Modern Age: A Conservative Review, and Editor-at-Large of The American Conservative.