Let's Not Turn Kashmir Into Another Gaza 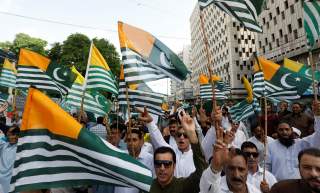 The world is witnessing a rise of populist politics. The sphere of such politics is so vast that it produces leaders like Donald Trump and Boris Johnson from the developed nations as well as populists such as Imran Khan and Narendra Modi from the developing countries of the world. While the memories of the referendum for Brexit in the United Kingdom and the passage of anti-immigration legislation in the United States are still fresh, the world is currently listening to the beat of a similar drum in India in the face of the passage of a controversial resolution repealing Article 370 and Article 35A of the Indian constitution. This resolution has annulled the special status involving the semi-autonomy of Jammu and Kashmir (J&K) and has placed the region directly under the Indian Union and the Indian Constitution. A landslide victory in the recent 2019 elections and subsequent powerful presence of the right-wing Hindu nationalist BJP in the Parliament facilitated the passage of this controversial resolution, fulfilling one of its main campaign milestones.

According to the Indian perspective, the government of India will be able to control the region more strictly and unswervingly towards curbing the ongoing militancy, terrorism, and turbulence in the region of J&K. Thus, BJP leaders and conservative Indian nationals are hailing the decision.

Conversely, the opposition parties in India and the Muslim leaders of J&K are protesting the repeal of Article 370 and 35A. Likewise, there has been a massive outcry from Pakistan against the repealing of the articles. Pakistan considers this a matter of violation of the letter and spirit of the United Nations Security Council (UNSC) Resolution on Kashmir. For Pakistan, it is another instance of depriving Kashmiris of their inherent right to self-determination. In a letter to the United Nations, Pakistan has requested that the UN take formal notice of the issue.

We opine that by repealing the articles, India has, in truth, deployed “lawfare” against Pakistan to counter Pakistan’s claims on the disputed territory of Kashmir. Lawfare—a mixture of two words, law and warfare—is a strategy of using the law as a weapon of warfare, according to retired Army Maj. Gen. Charles J. Dunlap Jr., which can also be waged without the presence of an actual armed attack. Therefore, it is also regarded as an element of hybrid warfare strategy in the contemporary era.

The use of lawfare is not a new phenomenon. Nations have historically used lawfare to secure a competitive advantage against their rivals. For example, the Dutch East India Company hired Hugo Grotius in 1600 to propose a lawful policy to counter Portuguese control over the spice trade route along the Indian coast. Likewise, in the contemporary era, the People’s Republic of China has resorted to efficiently deploying lawfare as a strategy of achieving competitive advantage over its adversaries and neighboring countries. Similarly, Shurat Hadin of Israel has also resorted to offensive lawfare by filing lawsuits on companies that offered assistance to the flotilla from reaching Gaza. India has followed a similar style of using law for gaining a competitive advantage over its rival, Pakistan. India had also used lawfare earlier when it took Pakistan to the International Court of Justice (ICJ) over the arrest and death sentence of Indian-national Kulbhushan Jadhav, who was convicted by a military court in Pakistan. As per the last hearing of this case, the ICJ has asked Pakistan for a reconsideration of the death sentence of Jadhav. Hence, India has successfully used lawfare against Pakistan, and New Delhi’s recent repeal of Constitutional Articles 370 and 35A is a continuation of its lawfare strategy.

Furthermore, since India used domestic law to repeal the decades-old special status of the internationally recognized and disputed territories of J&K, it is crucial to investigate if India has violated any international law, norm, treaty or principal. One perspective states that India may have harmed the letter and spirit of international laws and norms because the territory of J&K was given to India by the Maharaja of Kashmir on the conditions that were stipulated in Article 370 and Article 35A; however, the other dominant narrative affirms that India has not violated international law or any treaties because it has made the legislation for a region that was already under its legal control per the international law. Hence, the world is likely to not stringently oppose India's actions.

Nonetheless, the repercussions of India’s lawfare strategy can be seriously damaging to regional peace. Firstly, while Pakistan has already embarked upon a grand strategic reset and is also mediating negotiations between the United States and the Taliban, India’s employment of lawfare could potentially harm the effectiveness of the U.S.-Taliban talks. This, by extension, is detrimental to world peace. For the two nuclear powers with China in proximity, any lawfare like this can have severe repercussions for not only the Kashmiris but also for the entire international community, especially for South Asia.

Secondly, Kashmiri Muslims are feeling apprehension since J&K’s Muslim majority status is under threat: the repeal of Articles 370 and 35A now permits Hindu nationals from other regions of India to buy property in the J&K region. However, a rational analysis of this concern may suggest it as negligible, since Indians may not be interested in buying property in the J&K region due to the ongoing upheaval and the deterioration of law and order. Moreover, Kashmiri locals’ protests against the decision to annul Kashmir’s special status and routine skirmishes between the Mujahideen party and the Indian Army should further discourage Indian nationals from buying property in the conflict-affected J&K region. The only way through which the Indian government can create a scenario that is more conducive to the purchase of property in J&K is through initiating a settlement plan in the manner done by Israel in the Palestinian region. Such a settlement plan would undoubtedly ignite the Kashmir issue more harshly and may threaten to create conditions for J&K residents like what the Palestinians have faced in recent decades. The settlement plan may make J&K take a shift from a Muslim majority region to a Hindu majority or to more like a balanced-ethnic populous region. The world needs to ponder on this before the Kashmir issue may become as serious, complex, and threatening to the regional and international peace as the Palestinian issue is.

Thirdly, India’s waging of hybrid warfare through its lawfare strategy will most likely invite a reactionary policy from Pakistan. This can either be in the form of lawfare via approaching the ICJ or in some other hybrid-warfare endeavor. The indulgence into the latter option would cause both rival countries to engage in hybrid warfare against each other. As such a strategy also includes overt and covert operations, covert warfare missions may force the entire region to face uncalculated security risks. With both countries being nuclear powers with capable military forces, it is highly recommended that diplomacy should be reinitiated between them. In response to the growing tensions between India and Pakistan, President Donald Trump has reiterated his offer (a conditional offer only upon invitation) to mediate between India and Pakistan on the Kashmir issue, but the Indian side has again rejected this offer; New Delhi continues to maintain that it has never asked any country to mediate on the Kashmir issue and that it seeks to resolve the issue bilaterally with Pakistan.

It is likely that Modi may have kept President Trump’s eagerness to mediate on Kashmir issue in his mind. Therefore, the BJP has abruptly ended Kashmir’s special status to include the region within the Indian Union so that if the United States ever pressures India to accept Trump’s mediation on the Kashmir issue, India could counter that Kashmir is its internal region and, therefore, that any third-party mediation would be an offense and meddling in Indian domestic affairs.

What is probable is that the United States and the European Union (EU) will not seek to reverse India’s decision to annul Kashmir’s special status, even though the United States has, earlier on, declared the entire Kashmir region as a disputed territory—including the Azad Kashmir of the Pakistani side. The non-reaction would be motivated by the significant trade volume and economic ties between India and the United States and the EU in comparison to the existing U.S. and EU trade with Pakistan. Therefore, Pakistan is unlikely to receive substantial support from the international community on pressuring India over Kashmir.

Yet what is certain is that regional tensions are escalating again. Post-revocation, India has added 35,000 troops to the J&K region, cut off internet access, and placed several leaders under house arrest. Soldiers are alert on the Line of Control. It is unclear how Pakistan will respond: whether it would opt for a defensive lawfare strategy or would end up supporting covert operations as its hybrid warfare response to India. The use of force could be detrimental for either side. Pakistan’s lawfare response would be to use international fora such as the International Court of Justice or the International Criminal Court to prevent India from implementing its recent controversial legislation. It will be necessary for the United States and other world leaders to step-in for the sustenance of world peace. If they show any apathy, Pakistan’s engagement with India could serve to halt the delicate U.S.-Taliban peace negotiations. Additionally, the United Nations should use its discretion to cool the temperature between the two countries. The world certainly cannot afford to see another Gaza, forever causing the spillover of violence with no peaceful end in sight.