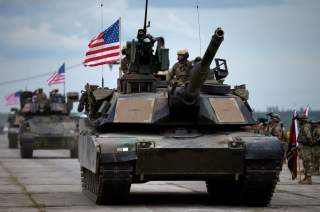 Does it matter if the Donald J. Trump administration—or any administration, for that matter—lacks a coherent vision for how the United States engages in the world? In a recent Snapshot for the Foreign Affairs website, Ionut Popescu makes the case that it doesn’t, arguing “Trump Doesn’t Need a Grand Strategy.” In his view, critics who fault the president—or any leader, really—for lacking or pursuing the wrong grand strategy are off base. Instead, analysts, citizens and foreign actors should take comfort that one will emerge over time as the Trump administration (like others) feels its way forward “through improvisation, incrementalism, and adaptation to changing circumstances” rather than meticulous planning. As Popescu puts it, “emergent strategy” rather than “grand strategy” is the key to foreign policy success.

This view is wrong. To be sure, no approach to U.S. foreign policy can anticipate the myriad problems, crises and opportunities faced during an administration—in a narrow sense, any administration needs to respond to domestic and international conditions. Still, grand strategy remains central to guiding the overarching way in which the United States engages with the world. Lacking such a vision in advance of coming to office is a recipe for drift, wasted effort, and missed victories. And, on this basis, Trumpian learning over time is not a panacea.

One might dismiss the importance of grand strategy by simply equating it with planning, defining it narrowly as “a coherent, long-term plan for ordering national objectives and devising realistic methods to achieve them.” Yet, in fact, grand strategy is really much… grander. As Nina Silove argues in the most careful analysis of the concept, grand strategy can be more broadly understood as the organizing principles that orient one’s foreign policy—it is not a rule book, but a set of integrated concepts and arguments that need to be revisited in response to the ebbs and flows of foreign policy successes and failures. Put differently, grand strategy is the intellectual architecture that relates ends (interests) to means (tools of statecraft), guiding policymakers and the foreign policy bureaucracy alike. Understood in this broader sense, the point of grand strategy is to highlight priorities and suggest tradeoffs, not to identify a particular course of action that can be taken off the shelf and dusted off when events merit.

Cold War–era containment is an excellent example of grand strategy in action. Of course, there was slippage between containment in theory as George Kennan originally conceived of the concept, and containment in practice. Nevertheless, the strategy involved a distinct set of organizing principles—highlighting general courses the United States should take and steps that it should avoid—that differed from other approaches considered at points in the Cold War. As Colin Dueck summarizes, containment “involved drawing lines of resistance around the Soviet bloc, and denying the USSR further gains, through the provision by the United States of economic, political, and military aid to non-Communist countries.” This core logic distinguished it from less aggressive alternatives—such as the sphere of influence arrangement considered by the Roosevelt and Truman administrations in the early Cold War—as well as more aggressive options—for instance, the rollback occasionally mentioned by the Eisenhower and Reagan administrations. Yes, the specifics of containment shifted over time, but it remained a grand strategy by virtue of its consistent organizing principles.

Nor was containment unique in functioning as a reasonably coherent set of principles and operating concepts guiding American engagement in the world. Most notably, American strategists after the Cold War quickly decided upon a grand strategy calling for the United States to actively manage geopolitical contests in core regions such as Europe, Asia, and the Middle East, while preventing the rise of peer competitors. Like containment, the specifics of this approach varied at the margins over time: sometimes, the United States opted for a more multilateral approach to managing clients and adversaries abroad; at others, the United States preferred a more unilateral course. Still, the fundamentals of the approach are distinct from alternative courses. These include widely discussed options such as collective security—pooling resources with other countries to fight any and all threats in Three Musketeers, “all for one and one for all” fashion—or some form of a scaled back U.S. role in the world—seeking a peace dividend by drastically reducing American commitments abroad.

The point of the above is not that any grand strategy is better or worse than any other in the abstract. Rather, the bottom line is that grand strategy—a way of thinking about the world that relates ends to means—is not something that can be left to drift. In a competitive and crisis-prone world, states pay a price for not knowing what they want (and don’t want) to do, and how they are going to get there. After all, not only can ad hoc action make difficult situations worse by courting uncertainty and miscalculation, but it risks squandering the time, blood and treasure of states themselves. Baldly stated, waiting for a grand strategy to emerge is not a solution—it courts problems that grand strategy is intended head off in the first place!

This is precisely why the Trump administration’s lack of a grand strategy is so problematic. Trump arrived in office arguably the least-prepared president in the foreign policy domain in modern U.S. history, riddled with contradictory impulses. Indeed, the first two years of the Trump administration have seen the problems on stark display, with just a few examples including: questioning the value of NATO and calling for rapprochement with Russia, while also building up the U.S. military presence in Europe; seeking a nuclear deal with North Korea while tearing up a widely-embraced nuclear agreement with Iran; labeling China a “revisionist” power while seeking to avoid further escalation and military conflict in the Pacific (and renegotiating the terms of trade with China to boot); and increasing U.S. military involvement in Syria immediately after declaring Syria ancillary to U.S. interests. Needless to say, these contradictory impulses have generated concern among U.S. allies and competitors alike, while contributing to chaos within the U.S. government itself.

Of course, no administration arrives in office fully prepared to take the reins of power, just as foreign problems can impose themselves even upon prepared administrations. Still, the lack of a coherent grand strategy in the current administration is wasting American resources, risking American lives, courting needless antagonisms, and forfeiting opportunities. Perhaps a coherent grand strategy will emerge from the morass—but the process itself highlights the dangers of simply letting leaders learn on the job when so much is at stake. After all, few would count it as a success if Trump discovered the virtues of credibly committing the United States to Europe, or reducing the U.S. presence in Asia, only after a crisis—with the all the risks attendant thereof—with either Russia or China. Likewise, it is a sad situation indeed that U.S. service-members lost their lives in Syria even after Trump pledged an American exit from the conflict; sadder still would be more casualties before the Trump administration decides what it wants. Ultimately, American foreign policy and those who carry it out have suffered as a result of Trump’s lack of grand strategy; more time and on-the-job training are not solutions.

In Defense of Grand Strategy

No grand strategy can anticipate everything. As a general guide to action, there may be situations that emerge and events that intercede where a prior approach does not suggest a clear sense of priorities or tools. Still, leaders need to do more than simply learn as they go along and wait for events to facilitate an emergent strategy; otherwise, drift, forfeited opportunities, and incoherence are likely to result. Ultimately, grand strategy matters because it helps states and leaders chart a course through the fraught waters of international politics. Leaders can certainly sidestep strategic thinking and learn on the job—but they should not be surprised when their states perform less well than could otherwise be the case. At a time when international politics is more important than ever, scholars and practitioners alike need to recognize grand strategy’s virtues.