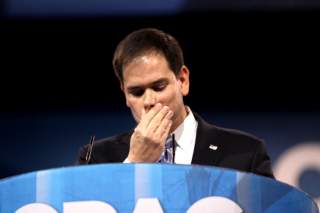 Senator Marco Rubio, the Florida Republican who seems to want to be president, issued a response to President Obama’s new policy toward Cuba that is so muddled and empty of internal logic that it raises questions about his capacity to play in the big arena of presidential politics.

Rubio opposes Obama’s moves to normalize relations with Cuba and to lessen trade restrictions on U.S. citizens and businesses. That may be a defensible position, but it’s a tough case to make fifty-three years after President Eisenhower cited serious strategic imperatives in cutting off diplomatic ties with the nearby island-nation. Much has happened in those fifty-three years, and any defense of those old policies must take into account the utterly changed world we have today in comparison to the dark days of the Cold War.

Rubio, in issuing his plaintive cry in the Wall Street Journal against what he considers an indefensible action based upon a “lie,” makes no effort to place his objection into the context of the world as it actually exists today. As a result, his commentary takes on the appearance of a tantrum—fierce and emotional, but lacking rigor.

He writes that Obama’s action has “endangered Americans,” but offers no credible argument for how this is true. Such an action would have endangered America during the Cold War, when Cuba was aligned with the Soviet Union and offered that mortal enemy of the West opportunities to thrust the United States into a defensive posture in its own hemisphere, even as it sought to protect Western Europe from 1.3 million Soviet and Soviet-client troops poised menacingly on Europe’s Western frontier.

Those days are gone, thanks to the resolve mustered by America and the West when it really mattered. But now the Soviet successor, today’s Russian Federation, possesses no global reach, no ability to overrun Europe, and no threatening ties to any nations in America’s near abroad, including Cuba. So why should the United States maintain a Cold War stance toward Cuba when there are no Cold War threats?

Rubio says it is because the Cuban regime is repressive, and “the Cuban people have the same rights that God bestowed on every other man, woman and child that has ever lived.” This is language so grandiose as to be silly. God may have bestowed such rights on every man, woman and child that has ever lived, but, if so, He has had a funny way of showing it. Many men, women and children who have ever lived have lived in misery born of man’s inherent weakness, folly and harshness. And no nation, movement or army has been able to alter that reality, except in rare and isolated circumstances.

But Rubio thinks, “All of those who are oppressed around the world look to America to stand up for their rights and to raise its voice when tyrants like the Castros are trying to crush their spirits.” It is doubtful that “all those who are oppressed around the world” actually expect America to do much about it, given that America rarely has been successful in taking on such repression. It did deliver the people of Cuba from the awful repression of Spain in 1898, but within half a century, they were governed by a brutal, corrupt, incompetent dictator named Fulgencio Batista—who was supported by the United States right up to the time he fled the island in the face of a revolution led by Fidel Castro.

In more recent times, the United States delivered the people of Iraq from the evils of Saddam Hussein—and set in motion civic strife that has claimed up to 150,000 civilian casualties, including twenty-one on Tuesday and 182 the day before. Many Iraqis now live under the repression of the far more brutal Islamic State, which desires to bring the entire land under its control.

One wonders if it has ever occurred to Rubio just how difficult it is for any nation, including the United States, to control events sufficiently in distant lands to soothe the wants and pains of humanity. A little history would convey the lesson.

But what does it mean for America to “stand up for” the rights of oppressed peoples and to “raise its voice” against tyrants? Is it for show? Does it actually mean anything? And, if it doesn’t really make any difference, then why all the emotionalism about America’s lack of commitment?

Rubio writes, “Since the U.S. severed diplomatic relations in 1961, the Castro family has controlled the country and the economy with an iron fist that punishes Cubans who speak out in opposition and demand a better future.” He is correct here, and it is lamentable. But then he adds, “Now, thanks to President Obama’s concessions, the regime in Cuba won’t have to change.”

A cursory study of syllogistic logic would unravel the flaw here. We have pressured Cuba with sanctions and diplomatic isolation for nearly fifty-four years, without any success in getting the regime to change its ways. But, now that Obama is renewing diplomatic ties and slicing away some sanctions, he gets the blame if the regime doesn’t change its ways.

But so what? Does Rubio think that Cuba, an economic basket-case of a nation with a mere 11 million people, poses a serious threat to the United States, with its 316 million people and unparalleled military prowess? Of course not. A careful reading of his opposition article reveals a foreign policy based on posturing and wispy hand-wringing about the human plight in places beyond our borders, particularly places of intense interest to population groups in the United States, such as Cubans in Florida.

If Rubio wants to run for president, he’ll have to do better than that. He may want to begin with a look at the polls showing the America people have come around to a logical framework on the matter that, so far, has eluded him.