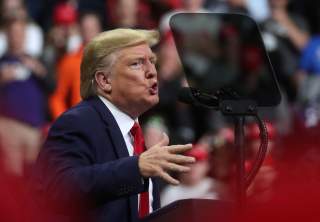 Today former U.S. ambassador to Ukraine Marie Yovanovitch testified behind closed doors in front of the House of Representatives. Hers may prove to be the most consequential testimony yet heard in the Democratic Party’s impeachment inquiry against President Donald Trump.

Yovanovitch was in her ambassadorial role from 2016 to May 2019 when she was dismissed two months ahead of schedule. The official reason appears to be insufficient loyalty to the Trump administration.

“The former ambassador from the United States, the woman, was bad news and the people she was dealing with in the Ukraine were bad news, so I just want to let you know that,” Trump told Ukrainian president Volodymyr Zelensky during their July 25 phone call. Zelensky commiserated with Trump and described his own issues with the female Ukrainian ambassador to the United States, whom he says he also immediately recalled due to her outward criticism of him.

There appear to have been forces gunning to remove Yovanovitch from her position for some time. Former Rep. Pete Sessions (R-TX) wrote a letter to Secretary of State Mike Pompeo in May 2018 asking that he consider terminating Yovanovitch from her post. “I have received notice of concrete evidence from close companions that Ambassador Yovanovitch has spoken privately and repeatedly about her disdain for the current Administration in a way that might call for the expulsion of Ms. Yovanovitch as U.S. Ambassador to Ukraine immediately.”

Sessions wrote this letter after receiving a $20,000 donation to his campaign from Lev Parnas and Igor Fruman, who disguised it as a donation from a Florida-based energy company. Parnas, Fruman, and associates were arrested Wednesday evening on charges of campaign finance violations, including donating hundreds of thousands of dollars in foreign money to domestic Republican organizations.

Speaking to the Dallas Morning News, Sessions denied that the two men had been the impetus for his seeking Yovanovitch’s ouster. “My entire motivation for sending the letter was that I believe that political appointees should not be disparaging the president, especially while serving overseas,” he said. Sessions declined to identify who informed him about her disparaging language.

Yovanovitch testified today despite the stated policy of the White House that State Department officials should not cooperate with the House impeachment inquiry and not show up to testify. Yovanovitch still works for the department.

During her opening statement, the former ambassador pushed back against accusations that she had been soft on corruption efforts or investigations. “[T]he notion that I created or disseminated a ‘do not prosecute’ list is completely false,” said Yovanovitch. The source of that accusation, Ukraine’s former prosecutor general, Yuriy Yovanovitch, has proved to be untruthful in his statements to U.S. media.

She also was firm that she had never criticized the president in an unprofessional manner, or that she had done anything to disobey or ignore his orders. Multiple people familiar with her and her actions in Ukraine told Buzzfeed News that they had never heard her say derogatory things about Donald Trump.

Acknowledging that she had only had minimal contact with Trump’s personal attorney Rudy Giuliani, Yovanovitch said that Giuliani’s hostility toward her may be based on “individuals who have been named in the press as contacts of Mr. Giuliani may well have believed that their personal financial ambitions were stymied by our anti-corruption policy in Ukraine.” She was referring to Lev Parnas and Igor Fruman.

According to Yovanovitch, she returned suddenly to the United States in the spring only to be informed by the deputy secretary of state that Trump had lost confidence in her ability to perform. She claimed that there had been “a concerted campaign” against her.  “The Department had been under pressure from the President to remove me since the Summer of 2018,” she said. Yovanovitch continues to believe that there was no just cause for her removal.

Going forward, two primary questions stand out: why were multiple people working to get rid of Marie Yovanovitch, and did Trump dismiss her while under this pressure?