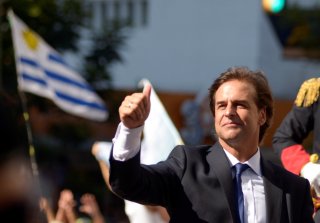 Uruguay, a small country that rarely makes headlines even in its own region, irritated its partners in the Mercosur trade bloc when it announced in July, ahead of the group’s semi-annual summit, that it had completed a joint study with China about the feasibility of a bilateral free trade agreement and that the two states are set to begin negotiations. Given that Uruguay’s population, 3.5 million people, is a mere one-quarter of 1 percent of China’s, such an agreement, if it is reached, will hardly shake the foundations of world trade.

But it does raise dilemmas for Mercosur, the Southern Common Market with four active members (Brazil, Argentina, Uruguay, and Paraguay), as its rules require that all members consent to any one of them signing a trade agreement with a third country. Such consent is not likely to be forthcoming; yet Uruguay still wants to move forward with negotiations, hopefully together with its Mercosur partners, but in any event, it is “unwilling to remain quiet.” But however this diplomatic gambit plays out, the affair highlights the disappointment which Mercosur has been since it began with great fanfare over thirty years ago, and the obstacles to serious regional integration within Latin America.

Mercosur originated in an optimistic era that seems impossibly distant now. Growth through increased international trade was the watchword of the “Washington consensus” of the international financial institutions. Regional trade groups were beginning to cohere. The United States had entered into a free trade agreement with Canada and was negotiating with Mexico, while other Latin American countries sought similar relationships with the world’s largest economy. At the same time, groupings in Africa and Asia were also emerging.

The often-heard buzzword was “open regionalism”—groups of countries would engage in deep integration among themselves and together negotiate agreements with other countries. One especially attractive model was the European Community, which had begun as a relatively loose, trade-oriented grouping and was moving to add new countries after the fall of the Soviet Union and would further consolidate internally as the European Union.

The prospect of forming a regional bloc had a special appeal for the countries which would come together in Mercosur. All had suffered during the “lost decade” of the 1980s when they were submerged in the debt crisis. They also saw a political dimension to regional integration, as they had returned to democratic governance after long stretches under military regimes which were both harshly repressive and unable to provide sustained prosperity. They also sought to overcome their history of mutual suspicion and friction.

Political and economic elites in Brazil and Argentina, with much smaller Uruguay and Paraguay following in their wake, saw Europe as a potential model, as demonstrated by its tremendous economic and political progress after the horrors of World War II. A series of summits paved the way for the creation of Mercosur, which was formally announced in 1991. Mercosur initially showed positive results as shown by a significant increase through the 1990s in intra-regional trade. However, the initial impulse began to lose steam in the 2000s, and currently, less than 10 percent of the member states’ trade is within the bloc, compared with 60 percent within the European Union.

Flawed from the Beginning?

Some of the causes of Mercosur’s decay were outside of the member countries’ control. China’s rise as an exporter of a full range of products devastated local sectors such as Brazil’s once-strong shoe manufacturing industry. But many of Mercosur’s problems were internal and represented a failure to complete both the internal free trade area and the common external tariff as its European model had been able to do. Mercosur’s tariff reduction efforts were riddled with exceptions and lengthy phase-ins which persist to the present.

But these failures were themselves consequences of larger systemic issues within the bloc which date from its origins. The European Community began from a relatively small, successful agreement on trade in coal and steel, which then became a broader bloc consisting of three relatively large countries—Germany, France, and Italy—and three smaller, but advanced states—Belgium, the Netherlands, and Luxembourg. Thus, there was always a fairly wide distribution of power among the members.

By contrast, Mercosur consisted of one huge member state, Brazil, together with another one of medium size, Argentina, and two extremely small countries, Uruguay and Paraguay, which really had no choice except to join given their dependence on the larger members for trade, investment, energy, tourism, etc. And while Argentina’s relatively more developed status partially compensated for its smaller economy compared to Brazil, its long-term economic decline has left it increasingly less able to serve as a counterweight.

These asymmetries are aggravated by the absence of effective Mercosur-wide institutions, particularly in dispute settlement, where there is nothing like the European judicial system, or the dispute settlement panels which play a role in the U.S.-Mexico-Canada Agreement (formerly NAFTA). While there is a small Mercosur secretariat headquartered in Montevideo, it has at best a coordinating function rather than real power. While Mercosur-wide entities exist, such as a court of arbitration which is available for businesses to use, there is no mechanism for resolving state-to-state disputes.

As a result, typically when one of the two larger members (Paraguay and Uruguay often have to take what they get) finds one of its domestic industries under pressure, the default position is to act unilaterally first and then negotiate the matter later, at a conference of ministers or ultimately at Mercosur’s semi-annual presidential summits. This ad hoc approach inevitably causes uncertainty and limits the gains that the common market provides.

And, of course, the tendency for intra-Mercosur trade disputes is aggravated by the unstable macro-economic situation of its members, with varying deficits and inflation rates, and attendant devaluations, meaning that at any given moment an industry of one state or another is seeking relief from imports. Of course, macroeconomic convergence has also been a challenge for Europe, as demonstrated by crises in some of its member states, notably, Greece and Portugal, despite agreed-upon deficit targets and a common currency.

But the Mercosur countries have varying degrees of economic health, as shown by their inflation rates—with Argentina the outlier as it currently spirals towards an annual rate of 90 percent, compared with 12 percent in Brazil, 11 percent in Paraguay, and 9 percent in Uruguay. Periodically, the idea of a common Mercosur currency has been raised, most recently by Brazilian president Jair Bolsonaro, but it has never been more than a politician’s talking point.

And even as Mercosur’s progress on trade integration slowed, its political ambitions increased dramatically, driven by Brazil, which saw it as a vehicle to organize South America under its leadership. This included successfully opposing an effort by the United States to create a Free Trade Area of the Americas by extending its network of agreements with countries in North America, Central America, and the Andes to the Southern Cone and integrating them into a single network.

Venezuela and Bolivia were invited to enter Mercosur. These invitations had an ideological and geopolitical element as leftist governments in Brazil and Argentina saw common ground with Hugo Chavez and Evo Morales despite their authoritarianism. These efforts at politically motivated expansion, however, did not prosper. As Venezuela, which never made an effort to comply with the economic commitments of Mercosur membership, sank further into dictatorship and economic chaos, it was suspended from Mercosur in 2016, while Bolivia’s entry into the bloc has yet to be completed.

Uruguay’s effort to escape from the cage of its frustrating membership in Mercosur without simply exiting from it has been brewing for several years. The “take it or leave it” approach that Brazil and Argentina have often shown to the bloc’s smaller members has always been grating. And Uruguay’s relations with its neighbors on other issues, particularly with Argentina on issues such as pollution of the Rio de la Plata basin, are causes of periodic friction.

But more broadly Uruguayans feel with considerable justice that they have done better on both the political and economic fronts than their neighbors. Since the return to democracy, governments of the Left and the Right have pursued moderate courses both in substance and style. One recent example: Argentina’s media reported with shock that Uruguayan president Luis Lacalle, who is seeking to pass a pension reform bill, actually went over to the headquarters of the main labor confederation to explain his position—a gesture utterly unthinkable in Argentina’s rancorous political culture.

But perhaps more importantly, Uruguay has both managed its economy better than Brazil or Argentina, even as it has taken advantage of the strength of its agriculture-driven export sector. Uruguayan beef and wool are exported to both Europe and Asia, with China alone accounting for 30 percent of its total exports already). Also, new industries such as wine and pulp and paper have been developed. Uruguayan business and political leaders are interested in pursuing free trade agreements to lock in export markets and have been frustrated by Brazilian and Argentine reluctance to move forward.