Mexico Has Become Dependent on America for Political Stability 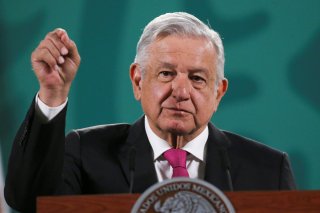 As the Biden administration continues to manage the migration challenges at the southern border, the United States is looking towards the longer term and engaging with regional partners to address the root causes driving migration flows in the Americas. Mexican president Andrés Manuel López Obrador understands how Mexico underpins the Biden administration’s strategy. Still, he should be careful and not overplay his leverage—the success and legacy of his own administration depend on a working and robust U.S.-Mexico relationship.

President Joe Biden is working to re-engage the Americas after four tumultuous Trump years. With a focus on the Northern Triangle countries of Central America, Biden has placed the region as a high priority in his agenda by appointing Vice President Kamala Harris to lead the efforts on addressing the migration challenges in the region. In addition to a broader $4 billion aid package, Harris recently announced $310 million in increased assistance to address some of the acute factors forcing the people of Guatemala, Honduras, and El Salvador to leave their homes. The vice president has also held various discussions with regional experts and heads of states. This demonstrates her commitment to the challenge at hand and shows a concerted effort to engage with regional partners.

Harris and López Obrador spoke on this matter earlier this month and the Mexican president knows full well that the previous two U.S. administrations relied on Mexico’s domestic immigration enforcement to manage the flows of migrants making their way to the U.S. southern border. The Mexican government increased its southern border enforcement in 2014 when the Obama administration struggled with the arrival of unaccompanied minors from Guatemala, Honduras, and El Salvador, and again under the Trump administration in 2019 when a record number of Central American parents with children attempted to cross into the United States. Now, as the Biden administration struggles with similar regional outflows—a recurrence over the past decade that has been accelerated by the pandemic and by more frequent and catastrophic natural disasters—it would be nearly impossible to effectively manage migration flows without Mexico’s cooperation, and López Obrador knows he wields immense influence over the Biden administration’s efforts.

But López Obrador should tread carefully and not abuse the standing he currently holds. It would be one thing for López Obrador to, say, ask the Biden administration to share America’s surplus vaccine doses with Mexico. It would be another matter entirely to mistakenly interpret the Biden administration’s reluctance to criticize his most worrisome and erratic policies as a free pass to continue unimpeded. There are ample reasons for López Obrador’s actions to cause alarm, and the Biden administration will eventually voice its myriad concerns. For example, there’s the mishandling of the coronavirus pandemic, inadequately responding to high rates of organized crime and violence, hindering joint security efforts, overseeing Mexico’s worst economic contraction since the Great Depression, and abdicating meaningful cooperation on clean energy and climate change. Additionally, López Obrador has exacerbated trade tensions, placed democratic institutions at risk, and incubated the toxic political environment he helped create with constant attacks and criticism of the free press and those he believes to be his adversaries.

Surprising to most, López Obrador maintains strong approval ratings despite his haphazard way of governing, but it is not sustainable. In time, it will strain U.S.-Mexico relations and undermine his administration rather than bring about Mexico’s “fourth transformation.” Already, the consequences of his mismanagement are noticeable in the increasing number of Mexican single adult males attempting to cross the U.S. border, harkening back to the rate of border crossing attempts of the early 2000s. This past February, Mexican migrants made up around 42 percent of those apprehended at the U.S. border, up from 13 percent in May 2019, the peak month in the current wave of apprehensions. López Obrador tarnished Mexico’s credibility as a secure destination for private investment. More importantly, though, he is setting back the democratic progress Mexico has experienced in recent decades. This will impact Mexico’s long-term development well after López Obrador leaves office.

So far, most Mexicans continue to give López Obrador the benefit of the doubt. But if he maintains his present course, then López Obrador’s shortcomings will resemble the disappointments of his predecessors. He’ll promise the country change only to deliver more of the same. His support and approval will diminish, at which point, to desperately ameliorate Mexico’s woes and save his legacy, his options will be limited and will need to turn to the United States for support. The United States will help, and López Obrador will not view such support as foreign meddling in domestic affairs, but rather as a benefit for all. Mexico needs the United States as much as the United States needs Mexico’s cooperation. López Obrador would be wise to believe in that relationship now and be a fair partner to the Biden administration in its time of need before the tables turn on him.

Joel Martinez is the Mexico policy analyst for National Security and International Policy at the Center for American Progress.