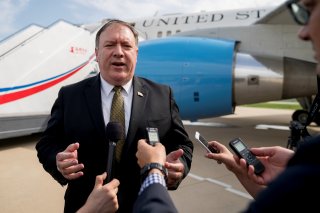 Mike Pompeo was the ultimate undiplomatic secretary of state. He paraded about the world talking about his swagger. Observers were more likely to comment on his other, less laudable characteristics, such as hubris, hypocrisy, and sanctimony.

Now, however, the best description of Pompeo might be “clueless.” Who knew that that the wannabe tough guy believed in miracles when negotiating with North Korea?

Pompeo discussed policy toward Pyongyang in a recent interview. He made his initial trip to the Democratic People’s Republic of Korea as CIA director, meeting with Supreme Leader Kim Jong-un to “take the tension level down and create a situation where we could have rational discussion” after President Donald Trump threatened war. Ironically, the uber-hawk Pompeo was tasked to play fireman and peacemaker.

Of his tenure as secretary of state, Pompeo noted that he regretted not making more progress with North Korea. “We convinced [Kim] not to do more nuclear testing and more long-range missile testing, but we weren’t able [to] get him to give up his nuclear program. You know, we got three Americans back.”

This perspective helps explain the administration’s overall failure. Pompeo was correct to laud the suspension of nuclear and long-range missile testing. Indeed, the administration inexplicably failed to make the case that this was a substantial achievement. Trump’s predecessors sought to halt both nuclear and missile development, without success. However, testing ended in 2018 and has not resumed, despite the collapse of U.S.-North Korean diplomacy, defeat of Trump, and arrival of the standoffish Biden. (Kim has tested short-range missiles, to the substantial discomfort of South Korea and Japan, but that capability matters far less to Washington.)

The end of testing inhibited further North Korean technological developments that could have threatened America. The North’s advances can only be estimated, but testing enables Pyongyang to improve existing weapons and add new capabilities. Although Washington should not assume away North Korea’s ability to hit the American homeland with nuclear weapons, without more work Democratic People’s Republic of Korea cannot assume that it possesses the ability to do so.

The test halt resulted in two further advantages. The first is that it would be easier—though certainly not easy—to convince the DPRK to bargain away the possibility than the reality of targeting the United States. The second is that testing creates fear and encourages retaliation, making negotiation more difficult. The suspension cleared the decks, so to speak, for further diplomacy.

The failure to highlight the end of testing left the administration vulnerable to claims that it had gained little from Pyongyang for U.S. concessions. Or worse, that Washington had given away the store—for instance, halting military exercises with the Republic of Korea—for nothing. In fact, the administration achieved something of significant value.

In contrast, Pompeo overestimated the credit he and the administration deserved for winning the freedom of three Americans held by North Korea. History suggested that their release did not require the suspension of military exercises or the Trump-Kim summits. On the contrary, Pyongyang previously sought a visit by someone once important—for instance, Bill Clinton, Bill Richardson, a former governor and Cabinet official, and Jimmy Carter. Then any unfortunate prisoners got sprung. A repeat probably would have been possible. With a summit in the works, it was good to toss the prisoners’ freedom into the deal. But this wasn’t a policy triumph.

Most significant, however, was Pompeo’s admission that the Trump administration wasn’t able to get Kim “to give up his nuclear program.” Apparently, the former secretary really believed he could do so with a policy seemingly designed to do the opposite. This suggests a mix of almost criminal ignorance, naivete, and arrogance.

If the administration consulted anyone outside of the limited Trump inner circle, then it would have found most Korea specialists skeptical that there was any circumstance under which any North Korean leader would voluntarily yield the North’s nuclear weapons. The North well demonstrates the truth of the adage that even paranoids have enemies.

Nukes provided the ultimate deterrent, offered a tool for extortion, and rewarded the military. Perhaps better policies in the 2000s, when the George W. Bush administration succumbed to hubris toward the North as well as Iraq, could have convinced a still weaponless Pyongyang to foreswear nukes. Today, when the DPRK almost certainly possesses enough nuclear materials for scores of nuclear bombs, the task is far more problematic.

Then there was the impact of Trump’s behavior, which was not calculated to encourage a diplomatic solution. He first threatened war, reinforcing the importance of an effective nuclear deterrent to Pyongyang. The president showed himself to be an awful negotiator, getting routinely played. All anyone needed to do was target his vanity and self-absorption. He appointed John Bolton national security adviser—after Bolton had written an article advocating an attack on the North.

The president tore up the Joint Comprehensive Plan of Action after Iran complied with its terms and demanded that Tehran give up its independent foreign policy to get another deal. That was after the Obama administration rewarded Muammar el-Qaddafi for yielding his nuclear and missile programs by staging a regime change operation. Finally, the Trump administration pressed hard for an all-or-nothing deal with Pyongyang, in which the latter would have had to comply with the complicated process of denuclearization, giving up its leverage, before receiving any promised benefits, thus forcing it to trust not just Trump, but his successors.

Kim might be many things, but he is no fool.

Under these circumstances, is it really a surprise that Trump, Pompeo, and others failed to denuclearize the DPRK? Success would have been a shock.

In contrast, the Biden administration appears to be filled with officials well aware of the challenges of dealing with the North, perhaps too aware. Many of Biden’s staffers were members of the Obama administration, which practiced strategic patience, meaning not doing much. Then they watched Trump not achieve much. To avoid repeating the Trump experience, they might be unduly cautious, reluctant to seriously engage diplomatically absent a guarantee that denuclearization would result. In this way, the Trump/Pompeo curse could live on, continuing to thwart hopes of reaching a more realistic but still beneficial nuclear deal.

Give Trump credit, he created an opportunity for serious negotiation. However, he was utterly incapable of forging such a pact. Now Pompeo’s comments suggest that the secretary of state may have been no better prepared. And hence was lost one of the nation’s great diplomatic opportunities.