Is Missile-Driven Deterrence the Solution to the War in Ukraine? 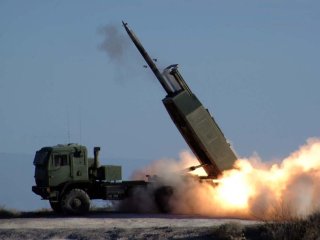 Ever since President Joe Biden first swore off fighting World War III (and creating no-fly zones over Ukraine), Washington nuclear intellectuals have enjoyed a momentary splash of relevance. Nuclear fear and loathing—i.e., nuclear mutual assured destruction and deterrence—are back. Vladimir Putin rattled his nuclear sabers. Initially, we blinked. Now, however, with Ukraine better armed and about to receive advanced missiles, the blinking is less intense.

Without quite thinking it through, Washington and Ukraine are transitioning from a war initially bounded primarily by nuclear threats to one being driven by conventional strike systems. Thus, strategic military breakouts by either side have been stymied less by dint of threatened nuclear attacks (which although frightening, are highly unlikely), than by the exchange of thousands of artillery rounds, drones, and rockets.

Both sides have used these weapons to strike armor, ships, cannon, and troops. Putin has gone further to use them to knockout Ukrainian maternity wards, children’s hospitals, nurseries, grocery stores, schools, theaters, cultural moments, and churches. He has fortified these “value” terrorizing raids with long-range strikes against Ukrainian electrical generation stations, shopping centers, factories, fuel, and food storage sites, and critical industrial and agriculture infrastructure. Russia’s aims?  First, amp up international digital displays of darkness, hunger, and despair to deter Ukraine from shooting outside its borders and NATO and the United States from shooting in. Second, brutalize and grind Ukraine to force it and its friends to cave.

One might view this mash as a modern, “discriminate” version of Allied city-busting of the 1940s—massive bombing runs that flattened innumerable Axis cities. Each of these destructive aerial riots was inflicted in a matter of hours (at most, several days) murdering tens of thousands of innocents per assault (c.f., Operation Meetinghouse, which killed 100,000 Tokyo residents in one night).

Thankfully, Russia is not quite doing that. First, even after the firing of thousands of missiles, the confirmed Ukrainian noncombatant body count is lower. According to the United Nations, the tally only just breached 4,000 (although, with Mariupol, the unconfirmed, real number is almost certainly far higher). Second, the destruction dealt has taken much longer to inflict—the result not of single massive, raids, but of thousands of batteries inflicted over a period of months—and Russia, for now, has not leveled Ukraine’s western cities.

Why has Putin’s blitz been so attenuated? Some say his missile arsenal was never large or reliable enough to do much more. That’s part of it. With a limited number of truly effective munitions, Putin’s brutality has had to be selective. Only the most leveraged targets are worthy. These include those that, if hit, would produce massive knock-on military effects (e.g., ammo and fuel dumps) and those that can generate demoralizing terroristic displays (i.e., a maximum number of dramatic digital images of dead and dying innocents).

Yet, there’s a deeper explanation for Russia dribbling out its mayhem—a desire to deter without widening the war. With enough sufficiently long-range missiles, Ukraine could threaten to bring the war to Russia. That could challenge Putin’s continued command and rule—something he’s keen to avoid.

Flip Putin’s worry over and you get Volodymyr Zelenskyy’s desires and Biden’s fears. Zelenskyy has long pleaded for long-range weapons to push Russia out of the eastern portion of Ukraine. He has plenty of targets in occupied Eastern Ukraine to aim against. But Biden has been anything but eager.

What’s behind this reticence?  The same thing that worries Moscow: escalation. Biden understands that with too few long-range weapons, Russia could push Ukrainian forces into a corner. Yet, if Ukraine was armed with enough of such weapons with enough range, both Biden and the Russians fear Zelenskyy might fire them into Russia. Thus, Biden takes agonizing weeks to approve giving Ukraine missile launchers not with rounds of 180-mile range, but of only roughly 40 miles. He does this but only after getting Zelenskyy to promise not to fire any missiles into Russia, and only after he, Biden, reassures the world that he will not “try to bring about [Putin’s] ouster” (something key Russians immediately applaud).

With any bad luck, this drama will continue. Now that Zelensky has pledged not to fire beyond Ukraine’s boundaries, the case for sending longer-range missiles (including the 180-mile variety), is already being revisited. Kyiv’s supporters insist that more missiles of longer range are not a problem, but a solution.

A Ukraine that receives more longer-range weapons soon would be a Ukraine more capable of deterring Russians and be less likely to escalate than one that received too few less capable systems too late. Of course, those who distrust Ukraine, fear Russia, and crave normalcy will reject this and raise the remote risk of Russian nuclear escalation in hopes of catalyzing a diplomatic solution.

Meanwhile, others are taking notes. Far from the Ukrainian front, Iran’s top military brass already have their take: Conventionally armed missiles, they declare, “by building the balance of fear, can prevent war and will force adversaries to resort to diplomacy.” Putin, armed with long-range artillery and deep strike weapons, and Zelenskyy, who will need more to avoid the worst, understand this all too well. We, on the other hand, are widening our eyes but still struggling as to which of these two we should defer to.

Henry Sokolski is the executive director of the Nonproliferation Policy Education Center in Arlington, Virginia. He previously served as deputy for nonproliferation policy in the office of the U.S. secretary of defense during the George H.W. Bush administration and is author of Underestimated: Our Not So Peaceful Nuclear Future (2019).