On Myanmar, Japan Alone Must Hold the Line 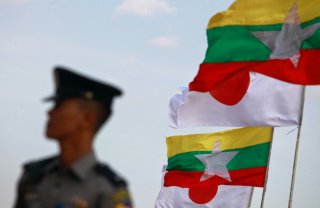 Myanmar stands today on the brink of devolving into a failed state. As mob violence increasingly turns into full-fledged insurgency committing acts of terrorism across the country, the Southeast Asian country finds itself doubly sieged and isolated due to mounting international pressure, culminating in the recent exclusion of its military government chief, Senior General Min Aung Hlaing, from the Association of Southeast Asian Nations (ASEAN). While Myanmar’s military, the Tatmadaw, has repeatedly reaffirmed its constitutional commitment to the country’s democratization, its countless proclamations have largely fallen on deaf ears at home and abroad, exacerbating the internecine bloodbath in a country critical to a Free and Open Indo-Pacific to the ultimate benefit of China. As the Biden administration prepares for its signature Summit for Democracy in earnest, the global response to the Myanmar crisis among democratic countries needs an urgent course correction lest the country falls prey to a catastrophic civil war and the geopolitical machinations of Beijing and other foreign elements. Japan alone must leverage its decades-long special relationship with Myanmar to lead such a change.

Today, Myanmar finds itself embroiled in a protracted low-intensity conflict. In fact, this has been all but an inevitable trajectory since the beginning. As soon as the constitutional transition of power back to the Tatmadaw took place on February 1, 2021, the so-called peaceful demonstrations immediately turned violent with certain radical Left groups, including possible foreign elements, stoking further chaos by resorting to terrorism. The simmering mayhem on the ground began to coalesce into a nationwide insurgency when the National Unity Government (NUG) formed its own armed wing, the People’s Defense Force (PDF), in May and began to use guerilla tactics against the Tatmadaw. Indeed, the NUG consists of numerous elements from the decades-long communist insurgency led by the Communist Party of Burma (CPB) seeking to topple the military government often with covert support from Beijing and international non-governmental organizations (NGOs). Predictably, the NUG later declared war on the Tatmadaw-led State Administration Council (SAC) in September.

The upshot is the growing prospect of a war of attrition Balkanizing Myanmar along political and ethnic lines. To be sure, the Tatmadaw’s actions have regrettably incurred casualties. Yet, such tragedies have occurred largely in response to the growing threat of domestic terrorism and insurgency masquerading as peaceful protests conducted on the NUG’s watch. Whoever perpetrated such acts of terrorism only understands the language of force and must of course be met with the maximum use of violence. Moreover, the NUG’s declaration of war on the Tatmadaw has emboldened ethnic minority insurgent groups in Myanmar’s peripheries, sowing further seeds of instability in the middle of the Indo-Pacific.

Regrettably, the Tatmadaw’s thinking and actions remain largely misunderstood, if not flatly ignored. It is a salutary reminder that the Tatmadaw is Myanmar’s constitutionally-recognized fail-safe mechanism supporting the country’s lingering aspirations to democracy since its founding. According to Articles 417-20 of the 2008 Myanmar constitution, a state of emergency can be declared in the event of a national crisis threatening the country’s sovereignty and internal cohesion, authorizing the commander-in-chief of the Tatmadaw to assume power over the three branches of the government. This is to ensure national resilience against various threats to ultimate democratization, including election fraud and violent insurgency, which have indeed caused many incipient democracies ranging from Ukraine to Afghanistan to collapse. In short, the Tatmadaw’s fateful action on February 1 and its subsequent reign are in fact perfectly constitutional in Myanmar and merely an interregnum in the vicissitudes of its nascent post-colonial history.

Indeed, Senior General Min Aung Hlaing reiterated the above points in his consequential address on August 1. He declared his intention to complete the provisions of the state of emergency by August 2023 to achieve “a genuine and discipline-flourishing multiparty democratic system” in a unified Myanmar “based on democracy and federalism.” To this end, the SAC has been pursuing its Five-Point Road Map with the ultimate aim of holding “free and fair multiparty democratic elections…in line with the 2008 Constitution… and [hand]ing over State duties to the winning party in accordance with democratic standards.” Moreover, the Tatmadaw chief himself became the prime minister to oversee the new caretaker government’s executive power in leading the constitutionally-mandated democratic transition. Therefore, August 1 marked a watershed moment in the Tatmadaw’s drive for a democratic Myanmar.

Yet, most democratic countries, particularly the West, have willfully refused, if not outright disregarded, dialogue with the Tatmadaw and instead unconditionally supported the NUG despite its growing militancy. Indeed, U.S. secretary of state Antony Blinken has repeatedly condemned the Tatmadaw and even pressured ASEAN to take action against Myanmar. He even met with representatives of Myanmar’s so-called civil society organizations in July while his deputy, Deputy Secretary of State Wendy Sherman, subsequently held talks with the NUG. The European Parliament echoed Foggy Bottom by voting to support the NUG in early October. Furthermore, United Nations special envoy for Myanmar Christine Schraner Burgener recently urged Senior General Min Aung Hlaing to step down. These global efforts to contain the Tatmadaw ultimately culminated in the official expulsion of Senior General Hlaing from ASEAN, where U.S. president Joe Biden rallied regional support for further pressuring the military government.

Needless to say, the Western disregard for Myanmar’s constitution is a flagrant infringement on the spirit of sovereignty and non-interference. Such hostile attitudes to the Tatmadaw shown by the world’s leading democracies unmistakably inspired, if not pressured, ASEAN’s latest decision to scrap its founding principle of non-interference and exclude the Myanmar military chief from the organization. Indeed, this occurred at a time when the Biden administration’s recent approach to select ASEAN member states had increasingly threatened the internal cohesion of the regional architecture. In particular, using Myanmar as fodder for mustering regional support for the Summit for Democracy would further undermine the ASEAN’s unity, ironically undoing the very foundation of a Free and Open Indo-Pacific.

Myanmar’s worsening predicament at home and abroad is precisely the situation I previously warned about. Indeed, Myanmar’s current situation increasingly bears closer resemblance to that of Syria during the early days of the Arab Spring where the Western support to the Free Syrian Army paradoxically led the country to become a breeding ground of jihadist terrorism and ultimately came under Russia’s influence. It also underscores the fundamental failure of the Western policy of democratization through regime change. The West must finally realize the folly of its hubris in believing that it can impose its will on an ancient Asian civilization with a fundamentally different value system. Moreover, from Libya, Syria, Iraq to Afghanistan, the recent Western experiments in democratization outside the West have all abysmally failed, culminating in the embarrassing abandonment of helpless Afghan civilians in the merciless hands of the Taliban.

The Myanmar question is now a vital issue confronting the future of a Free and Open Indo-Pacific. As Pakistan increasingly becomes China’s bridgehead for projecting power into the Indo-Pacific after the fall of Kabul, Myanmar may risk a similar fate if the Tatmadaw’s governance weakens to the point of succumbing to Beijing’s debt-trap diplomacy for national survival. The West’s repeated clarion calls for democracy and human rights in Myanmar have paradoxically goaded its military government onto a more authoritarian path, much to the delight of Beijing which has been wooing the Tatmadaw’s top generals. To be sure, despite China’s courting, the Tatmadaw remains first and foremost the national symbol of Burmese independence and is fundamentally wary of any great power intentions, leading Hlaing to cancel his attendance at the recent ASEAN-China summit. Yet, such a subtle balancing act may not endure long amidst the ongoing Western-led global siege against the Tatmadaw under the banner of democracy and human rights. If the West continues to experiment with its own brand of democratization in Myanmar over and over while expecting a different result, such an approach borders on insanity and is certainly not a responsible policy promising a democratic Indo-Pacific increasingly overshadowed by China’s growing regional influence.

Against this backdrop, Japan, as one of the world’s leading democracies, must maintain its exclusive channel with the Tatmadaw to support its ongoing democratic transition. As I argued before, resolving the present Myanmar question requires “deference to the country’s history and economic development of a political environment conducive to democratization rather than external imposition of foreign values.” Such a paradigm shift in thinking about Myanmar would begin by soberly recognizing that the Tatmadaw is the constitutionally-mandated necessary evil and is now struggling to secure the country's democratic future against all odds. As China and Russia loom large over Myanmar’s fate, Japan’s continued engagement with the Tatmadaw would be a much-needed democratic counterweight restraining the global ascendancy of authoritarianism affecting the future of the Indo-Pacific. As the secretary-general of the Japan-Myanmar Association, I remain unequivocally convinced of my country’s sui generis role in leveraging the Myanmar-Japan special relationship in support of the Tatmadaw’s enduring vision for the country’s democratic future.

Myanmar is now a dagger pointed at the heart of a Free and Open Indo-Pacific. Its decisions and actions for the next two years will have irreversible influence on the future of the Southeast Asian country and the region at large. As in Chile in 1973, the issue at stake is too important to be left to the political will on the disorderly streets of Yangon or at the ivory towers of Western capitals entertaining abstract ideals of democracy. As extremists and China look to fill any power vacuum in Myanmar, the Tatmadaw is the last line of defense for the country’s democratic future. After the apocalyptic fall of Kabul shattered the credibility of Western democracies, the world cannot afford another Afghanistan at the center of the Indo-Pacific. Therefore, I contend that Japan alone must demonstrate shrewd realism and fearlessly hold the line on the Myanmar question by continuing to support the Tatmadaw’s efforts toward a multiparty democracy. The upcoming Summit for Democracy will be the first real test for the new Japanese prime minister Fumio Kishida in leading the country’s special relationship with Myanmar.