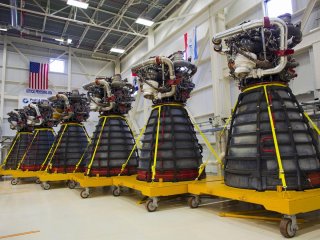 The U.S. defense industrial base is a unique sector of the American economy. It’s the foundation for the technological edge that gives our warfighters the best possible tools to prevail in any potential future conflict. Indeed, future military advantage in competition with China and Russia relies upon the technology and innovation that comes from this critical industry. And yet, the Federal Trade Commission’s new lead Commissioner, Lina Khan, has begun her tenure by considering an experiment to break up successful enterprises and let academic theory biased against vertical mergers in the defense industry guide the FTC’s early decision making as it considers acquisition proposals such as Lockheed Martin’s acquisition of Aerojet Rocketdyne. The stakes are too high to not give the Defense Department the primary voice in any acquisition approval decision that could impact national security and our future competitiveness with China and Russia in the crucial rocket propulsion sector.

What History Tells Us

Prior to World War II, America relied on an arsenal system, where the government designed and produced most weapons and munitions. Our entry into World War I required rapid mobilization, but there was no way to quickly accelerate production.

We learned from the shortcomings of the arsenal system in World War II, with America fully engaged as the “Arsenal of Democracy.” The U.S. industrial base churned out weapons and munitions at a dizzying rate to help win the war.

Since then, this model of collaboration and necessary consolidation among the defense industrial base and the Department of Defense has endured, resulting in continuous innovations that have given the American warfighter the technological edge, while keeping the specialized requirements in the sector affordable for taxpayers.

We see the fruit of this collaboration all around us, such as GPS, Aegis phased-array radar systems, Patriot missiles, stealth aircraft, and unmanned aerial vehicles. That same collaboration is now surmounting the challenge of developing and fielding the next generation of weapon platforms and advanced technologies, such as hypersonics, directed energy, artificial intelligence, and more, to maintain and extend America’s technological edge over potential adversaries.

In all these endeavors, the government has held great sway over industry by virtue of its status as sole buyer and through underwriting research and development efforts and sharing forecasts about future needs.

The defense industry differs from much of the economy in the way it interacts with government, and in how competitors frequently collaborate with one another in support of national security. The industry is distinct from the likes of Apple and Google. Prime contractors often collaborate on one project while competing fiercely on others.  All of the major contractors depend on one another for the supply of critical sub-systems and components. Competitors supplying and depending on one another is a common feature of today’s defense industrial base.

General Dynamics and Huntington Ingalls Industries, for example, are known as fierce competitors for shipbuilding contracts. Yet when our nation needed submarines to be developed and produced, they collaborated on building the next-generation attack submarine, the Virginia-class, and have worked together on the new Columbia-class submarine.

The current defense industrial base model originated ten years ago, when then-Undersecretary of Defense for Acquisition, Technology, and Logistics Ashton B. Carter laid out how the Defense Department would work with a scaled-down, post-Cold War defense industry.

He prioritized “long-term innovation, efficiency, profitability, and productivity growth,” and emphasized that we must rely on “normal market forces to make the most efficient adjustments to the defense industrial base.”

This system is largely transparent, open, and fair, notwithstanding the expressions of concern that some companies voice when new mergers or acquisitions in the sector are proposed.

These consolidations can create greater efficiency and innovation, assure the enduring health of key American suppliers and manufacturers of critical defense products and technologies, and promote strong balance sheets. Such transactions should be welcomed.

Such is the case with the proposed Lockheed Martin acquisition of Aerojet Rocketdyne, a merger that would not alter the competitive landscape in any appreciable way. In fact, it enhances and restores a competitive playing field in the crucial rocket propulsion sector that has tilted dramatically towards well-financed vertically integrated primes such as NG-OATK, SpaceX, and Blue Origin. LM and AJRD have virtually no overlap in terms of market position or the types of systems and services they offer, and the number of rocket propulsion providers would not change.

If the transaction is approved, Aerojet Rocketdyne would benefit from greater stability and would be able to pour more resources into technology, research and innovation. Post-acquisition, Aerojet Rocketdyne’s products will still be available on the open market the same as if the company remained an independent merchant rocket manufacturer. Strong oversight mechanisms available to the Defense Department and the FTC such as consent decrees and 3rd party monitoring have been used to great effect in the Defense industry for decades. That’s good for the taxpayer and the entire defense industrial base. It is also in complete alignment with the goals of the President’s recent executive order on competition in the economy.

Now is not the time to apply academic antitrust theory to vertical mergers and acquisitions in the defense sector without deference to the deep expertise of the Defense Department in these matters. Especially when the Russians and Chinese are threatening to leap ahead technologically. The rules of the road were laid down years ago, and the defense sector has dutifully followed them with a formula that works. Let’s focus on the competition and collaboration among defense contractors demanded by our national security as the prime consideration.

Harry J. Kazianis serves as Senior Director at the Center for the National Interest, founded by President Richard Nixon. The views expressed are his own. You can follow him on Twitter: @Grecianformula.