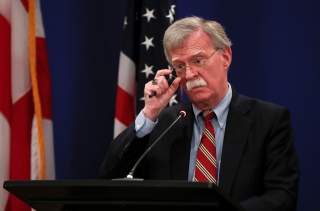 As 2019 gets underway, allies and confidantes of President Donald Trump continue to swim in the choppy waters around the West Wing, each seeking time with the principal in order to pursue their own private agendas.

The president’s policy prerogatives are clear, and often, formally announced: a pullout in Syria, a drawdown in Afghanistan, and possibly, a reevaluation of the American commitment to NATO.

But if only it were so simple. The president is short on public allies to back him on a considered, level-headed policy course that—and this is key—flouts the authority of an up-in-arms establishment.

Central to the drama is Sen. Rand Paul, the president’s one-time primary opponent.

“We’ve won the war in Afghanistan! We need to learn how to declare victory and come home. We shouldn’t be there nation building. [Trump] gets this, but so many in Washington are lost and confused!” Paul said Thursday.

“I have never been prouder of President Donald Trump,” Paul said Wednesday, noting that he’s been ducking in and out of the White House all week. “Putting America First means declaring victory in Afghanistan and Syria. President Trump is delivering on his promises.”

Two years in, Trump has struck a de facto alliance on foreign policy with realists in Congress, many libertarian-leaning, that had been long hoped for by many in that contingent.

As Rep. Thomas Massie, a steadfast Paul ally, told the American Conservative foreign policy conference in 2016 in the days following Trump’s shock electoral victory, Trump had been, after Paul, effectively his second primary choice for reasons of war and peace.

“I think there is a spot in the Republican Party for those of us who don’t want to intervene in everyone’s business,” Massie said. “This is going to be our political territory, I think.”

But the waters around Washington are filled with others who are determined to convince the administration to reverse course.

Speaking on the Syria pullout, Sen. Marco Rubio, another primary challenger to the president who’s since made good, cast the stakes for the withdrawal in the most consequential terms this week. “The history in that region has been that the minute you take pressure off these groups, they grow, and they begin to strike,” Rubio said. “And if in a year from now, they’re waving black flags and cutting heads again on YouTube, we may have to go back in, which would be the worst possible outcome for the president, for the country.”

As four more Americans lost their lives in the war-ravaged country Thursday, Rubio was one of the lawmakers at the White House, pressing his case for staying the course.

The thinking in Washington is that the latest carnage out of Syria could break, politically, one of two ways: infusing the administration with a renewed purpose to see through the pullout, or, as a source who speaks frequently with the president told me, that it could scuttle the whole thing, for fears of a reconstituted Islamic State.

And in the West Wing itself, there are some who would be fine with pumping the breaks on the pullouts.

Senator Paul has opposed Bolton every step of the way in his attempts to curry favor with this president.

During the transition, the senator publicly announced his opposition to Bolton’s appointment to any of the three positions he was floated for: Secretary of State, Deputy Secretary of State and National Security Advisor. Bolton eventually secured the latter.

That no Senate confirmation is required to head the National Security Council was doubtless a factor, as it was with Susan Rice, initially favored for State, under President Barack Obama. Paul could have blocked it. But Bolton and Paul are now duking it out behind the scenes.

Bolton in many ways now occupies the role that Stephen K. Bannon, and James N. Mattis, were in at earlier chapters of the administration: the knife-fighting freelancer with his own policy prerogatives. He’s at the apogee of his power, which is why he’s never been more vulnerable.

“Bolton is on the edge,” a source close to the White House remarked to me. Bolton appears to be “actively undermining the orders the president has given and said publicly,” one U.S. government source told Foreign Policy. “I think it will create a rift between Trump and Bolton, and probably already is.”

But the trouble for Trump is that he can ill afford to bleed allies at the moment. Pushing through his agenda on foreign affairs could take a backseat as he’s managing a government shutdown and an uneven economy that many worry is teetering toward an inevitable recession.

And, perhaps of paramount importance, is the looming resolution of the investigation of Robert S. Mueller III. Sources inside the National Security Council have long noted to me that Bolton and his aides are among the more vociferous public defenders of the president on the matter, arguing that the president has been groundlessly maligned in the press and there’s a dire need to fight back.

Fred Fleitz, Bolton’s fiercely loyal and recently departed chief of staff, appeared on Shannon Bream on Fox News Monday and on administration favorite Lou Dobbs on Thursday. And he’s publicly taken the president’s side in the White House’s latest maneuver to block Democratic Congressional travel during the shutdown.

Fleitz took aim this week at one of Trump’s greatest foils, House Intelligence Committee Chairman Adam Schiff, noting his media-friendly reputation: “Our nation is safer since [Trump] blocked [Schiff ]from traveling... since he probably would leak anything classified he learned.”

So far, the battle between hawks and realists in the administration remains unresolved—and there are few signs it will end any time soon.