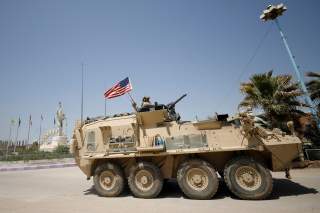 “U.S. service members were killed during an explosion while conducting a routine patrol in Syria today. We are still gathering information and will share additional details at a later time,” tweeted the Spokesperson for Operation Inherent Resolve.

President Donald Trump’s January 2 description of Syria as a land of “sand and death” has proved unfortunately prophetic.

Four U.S. soldiers were killed in a restaurant bombing, with the Syrian Observatory for Human Rights putting the death total at 15. Responsibility for the attack has been claimed by the Islamic State.

Up until now, U.S. forces have only suffered two casualties since the United States started bombing Syria in the fall of 2014. Multiple experts have spoken to TNI in response to the attack.

Manbij, where the bombing took place, is a large Arab city in the north of Syria that Kurdish forces, with American assistance, captured from the Islamic State in 2016. “The danger to U.S. troops is much higher in Manbij, where Turkey and the U.S. faced off and Turkey demanded that the YPG, or Kurdish forces, not be present. This required the U.S. to go out on patrols, which puts them at great risk. If the U.S. decides to police a buffer zone between Turkey and the Kurdish parts of Syria, more Americans will be killed,” said Oklahoma University Professor Joshua Landis, who heads their Center for Middle East Studies.

“The longer the Trump administration delays the previously announced withdrawal, the more troops we’re likely to needlessly sacrifice…It is time to expedite the president’s order and withdraw all our troops from Syria before any more troops are killed,” recommended Davis.

Others disagree, claiming that the attack proves that now is not the appropriate time for a U.S. withdrawal. “This horrific attack proves what the experts—including current or recently-resigned U.S. officials—have been saying: that ISIS remains a threat and that by declaring its defeat and ordering the immediate withdrawal of U.S. forces, Trump prematurely spiked the football,” said Executive Vice President Derek Chollet of the German Marshall Fund. Chollet previously served as the Assistant Secretary of Defense for International Security Affairs in the Obama administration.

“The administration’s explanations for what we are doing in Syria have been all over the place, and it is unclear how their strategy is supposed to work,” continued Chollet. President Trump has claimed (on Twitter and elsewhere) that the only task of U.S. forces in Syria is the defeat of the Islamic State. This has been continuously contradicted, however, by figures such as National Security Advisor John Bolton and Special Envoy for Syria James Jeffrey, who say the U.S. mission includes goals such as the withdrawal of all Iranian forces from Syria and guaranteed protections for the Kurds.

“Fighting other people’s civil wars is not the mission of the U.S. armed forces,” counseled Colonel Douglas Macgregor, who has been previously considered for the national security advisor position.

“The loss of U.S. troops in Syria is tragic. However, while plenty of Washington insiders will try to exploit their deaths to keep us in Syria indefinitely, this should stiffen the president’s resolve to withdraw U.S. forces,” said Macgregor.

“The sooner that a deal is made between the SDF and the Syrian state to establish a common police force, allowing for stability following the U.S. withdrawal, the better,” opined Landis. Unable to piece together a fully independent state, some, including Landis, believe that the Kurds should make an agreement with Assad’s government, compromise on autonomy short of independence, and use the Syrian government as a counterbalance against Turkish advancements. “Ambassador Jeffrey recently asked the YPG not to make a deal with the Syrian authorities. That is a mistake and will lead to U.S. troops having to patrol in the place of regional police,” Landis warned.

Chollet thinks there ought to be responsibility taken at home. “The newly constituted House Armed Services Committee should hold hearings soon with Acting Secretary Shanahan and General Dunford to get to the bottom of this,” he said. The U.S. Senate held similar hearings after U.S. troops were killed in an ambush in Niger in October 2017.

Davis believes U.S. strategy should change to focus less on holding physical territory overseas and more towards gathering intelligence for the prevention of terrorist attacks at home. “The security of our homeland is preserved through aggressive global intelligence, surveillance, and reconnaissance, along with robust cooperation between federal, state, and local law enforcement officials—no matter where on the Earth the threats arise,” he concluded. “With the Islamic State nearly vanquished and Russia firmly entrenched in western Syria, the United States has achieved all it reasonably can in Syria.”

Macgregor gave political advice to the commander-in-chief. “President Trump would do well to adhere to the wise policies of Eisenhower, Nixon, and Reagan—all of whom won re-election because they extricated U.S. forces from quagmires in Korea, Vietnam, and the Middle East,” he said. “U.S. forces should be repurposed to policing the American border, which is the central national security emergency of the day and a core tenet of their constitutional mandate,” suggested the colonel, referencing the ongoing government shutdown due to disagreements over funding for the border wall.