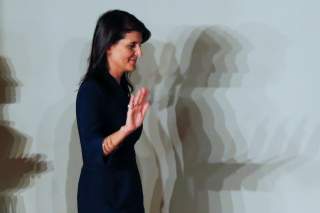 U.S. Ambassador to the United Nations Nikki Haley announced on Tuesday that she will be stepping down from the administration at the end of the year—a move that caught official Washington by surprise.

“It has been an honor of a lifetime,” the former South Carolina governor said at the White House alongside President Trump. “Look at the two years. Look at what has happened in the two years with the United States on foreign policy. Now, the United States is respected. Countries may not like what we do. But they respect what we do. They know if we say we’re going to do something, we follow it through.”

She added: “The president proved that. Whether it was with the chemical weapons in Syria. Whether it’s with NATO.”

“Running for president,” a former senior administration official emailed me after the announcement.

Indeed, the outgoing ambassador had to quickly shoot down the notion she is gearing up for an primary challenge against her boss.

In an op-ed last month in the Washington Post, she wrote: “When I do challenge President Trump, I do it directly.” Haley was seeking to rebut the notion that she is the infamous New York Times anonymous op-ed writer.

Haley said Tuesday that she was not running and that she would support Trump for re-election. But the president seemed keen to keep her in the fold, floating a sequel to her ambassadorship if she wanted it.

“You can have your pick,” Trump said.

Should Trump be worried? “He should,” a source close to the White House told me. The president has floated return trips for other officials, however, including Gary Cohn, his former economic pointman.

Another source close to the White House pointed to a report out Tuesday in the Huffington Post alleging possible financial impropriety on Haley’s part, similar to the scandals that derailed Scott Pruitt, the former EPA head, and Tom Price, the former health secretary. A former White House official doubted that’s what put her over the edge.

And her exit, of course, comes swiftly after the unprecedentedly controversial confirmation of Supreme Court Justice Brett Kavanaugh.

Haley leaves a legacy of hawkish foreign-policy establishmentarianism. She was frequently praised by many as a stabilizing force in an administration awash in populist, nationalist, and even neo-isolationist tendencies. She was approvingly cited in the New York Times Tuesday as a “moderate.” Less establishment-friendly forces in the president’s base frequently cited her as an unreconstructed neoconservative, and cheered her exit Tuesday. Other supporters of the president saluted her as a fearless defender of American interests. The hawkish Foundation for Defense of Democracies, the administration’s go-to shop on Iran, cheered her as a latter-day Jeane J. Kirkpatrick—Ronald Reagan’s flinty UN ambassador during his first term—earlier this year.

Earlier reports speculated that Ivanka Trump or Jared Kushner could be Haley’s replacement. Haley effusively thanked both on Tuesday, and the power couple was on hand at the White House for her unexpected announcement.

But my sources point to yet another early favorite: Richard “Ric” Grenell, Trump’s ambassador to Germany, whom I spoke with last week. Grenell is close to National Security Adviser John Bolton whose position is strengthened with the exit of Haley. Grenell at the UN would bolster it even further. The question, however, is whether the president would want to pull his point man on Europe back from the continent so soon to deal with Turtle Bay.