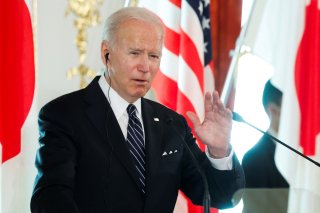 At a joint press conference in Tokyo with Japan’s Prime Minister Fumio Kishida on May 23, 2022, President Joe Biden was asked by a CBS News correspondent whether the United States would get “involved militarily to defend Taiwan” if the People’s Republic of China (PRC) mounts an invasion on the island democracy. The president responded, “Yes, that’s the commitment we made.” The White House then clarified the president’s message, stressing that America’s Taiwan policy hasn’t changed and he merely “reiterated our commitment under the Taiwan Relations Act to provide Taiwan with the military means to defend itself.” A day later, Biden himself also said at the Quad Summit that strategic ambiguity isn’t changed.

This is the third time (the previous two happened in August and October 2021) that Biden has allegedly veered off the longstanding official U.S. policy script on the Taiwan Strait—better known as strategic ambiguity—and expressed clearly that Washington would defend Taiwan from Beijing’s aggression. Foreign policy analysts, news pundits, and politicians, regardless of their positions on strategic ambiguity/clarity, soon took note of the president’s seemingly repeated misstatements and the embarrassing contradictions coming from White House officials who thrice “walked back” on the commander-in-chief’s Taiwan remarks. One of their concerns was that although Biden’s gaffes might have reflected his genuine perspective, the “confusion” surrounding U.S. policy could actually undermine deterrence and provoke China’s attack.

However, the notion that the Biden administration has undercut strategic ambiguity may be overstated. Instead, the president and his team are continuing the Trump administration’s process of upgrading strategic ambiguity and the One-China framework to more pragmatically protect Taiwan’s democracy and security as Chinese president Xi Jinping heightens Chinese nationalism and embraces a more offensive approach. A New York Times commentary aptly observed: “The U.S. retains the official policy of ambiguity, but Biden’s comments gave it a hawkish lean.”

In August 2020, the U.S. State Department formally incorporated President Ronald Reagan’s Six Assurances to Taiwan (1982) into the Taiwan Strait policy matrix, which previously only included the Taiwan Relations Act (1979) and the three U.S.-PRC Joint Communiqués (1972, 1979, and 1982). It declassified the Reagan documents explaining the rationales for making these pledges to Taipei. For instance, America has not agreed “to revise the Taiwan Relations Act” or “set a date for ending arms sales to Taiwan.” The “quality and quantity” of U.S. arms sales to Taiwan would be “conditioned absolutely” upon Beijing’s continued commitment to a “peaceful resolution of the Taiwan-PRC differences” and “threats posed by the PRC.”

Moreover, to underscore the distinction between the PRC’s One-China principle and the U.S. One-China policy, one of the assurances stated that “the U.S. has not agreed to take any position regarding sovereignty over Taiwan.” David Stilwell, the then assistant secretary of state for the East Asian and Pacific Affairs, contended that the “adjustments” to the U.S. One-China policy were imperative given Beijing’s “habit of distorting history” and claiming that the “CCP [Chinese Communist Party] has sovereignty over Taiwan.” The trinary configuration of the U.S. strategic ambiguity/One-China policy—“One Act, Three Communiqués, and Six Assurances”—has given the United States more latitude to deepen its security, political and economic ties with Taiwan. This is a needed response to the PRC’s growing assertiveness and escalated coercive campaigns to unilaterally upset the cross-Strait status quo, such as flying record numbers of fighter jets into Taiwan’s air space.

The Biden administration has persisted in strengthening U.S.-Taiwan relations, calling its support for Taiwan “rock-solid.” Vladimir Putin’s unprovoked military attacks on Ukraine further confirmed that autocratic powers are bent on belligerently challenging the rules-based international order and subverting the liberal democratic system. It has not been lost on observers that the Biden administration had rejected direct military intervention in the Ukraine conflict with Russia, while confirming that it would support Taiwan.

Thus, shortly before Biden’s Asia trip, the State Department updated its fact sheet on Taiwan relations by removing the previous descriptions that included “the United States does not support Taiwan independence” and a phrase “acknowledging the Chinese position that there is but one China and Taiwan is part of China.” State spokesperson Ned Price tweeted: “The PRC continues to publicly misrepresent U.S. policy. The United States does not subscribe to the PRC’s ‘one China principle’ – we remain committed to our longstanding, bipartisan one China policy, guided by the Taiwan Relations Act, Three Joint Communiques, and Six Assurances.”

At the Tokyo press conference, Biden’s rationale was quite deliberate. “Look, here’s the situation. We agree with the One China policy; we’ve signed on to it and all the attendant agreements made from there. But the idea that [Taiwan] can be taken by force is just not appropriate. It will dislocate the entire region and be another action similar to what happened in Ukraine. And so, it’s a burden that is even stronger.”

Strategic ambiguity is ambiguous in means only, not ends—which is to insist on a peaceful and consensual resolution of the Taiwan Strait impasse that considers the democratic preferences of the people in Taiwan. Washington has always left uncertain the specific actions and mechanisms it will take in order to dually deter Beijing and Taipei from embarking upon disruptive behaviors. Biden has lucidly signaled his intention to respond if the PRC pushes for a military invasion of Taiwan, but still remains vague on how he would pursue that. Intervening militarily could very well suggest providing weapons, military training, and logistical assistance rather than putting American troops on the ground and fighting for Taiwan. Last December, National Security Advisor Jake Sullivan told the Council on Foreign Relations that “the Taiwan Relations Act is a unique instrument -- we don't have it with other countries, we don't have it with Ukraine -- that does talk about American commitments to support Taiwan in various ways.”

Let’s not forget about the context behind Biden’s remarks. Under China’s diplomatic influence, the World Health Assembly has once again rejected Taiwan’s participation in its annual meeting that’s so crucial to contribute to global public health. To avoid overly provoking Beijing’s ire, the Biden administration didn’t invite Taiwan to join the launch of the U.S.-led Indo-Pacific Economic Framework even though bolstering critical supply chains and the resilience of the digital economy—areas where Taiwan excels—are on top of its agenda. Kurt Campbell, the National Security Council’s Indo-Pacific coordinator, reiterated in mid-May that the United States does not support Taiwanese independence.

In light of that, Biden's failure to affirmatively articulate American support for Taiwan if it was attacked would have sounded the real death knell to strategic ambiguity.

Dr. Dean P. Chen, an Associate Professor of Political Science at Ramapo College of New Jersey, is the author of U.S. Taiwan Strait Policy: The Origins of Strategic Ambiguity (Lynne Rienner Publishers, 2012) and U.S.-China Rivalry and Taiwan’s Mainland Policy: Security, Nationalism, and the 1992 Consensus (Palgrave Macmillan, 2017). His forthcoming book, U.S.-China-Taiwan in the Age of Trump and Biden: Towards a Nationalist Strategy (Routledge, 2022) informs some of the observations outlined in this article. He can be reached at [email protected].