No Collusion Is Not Good Enough 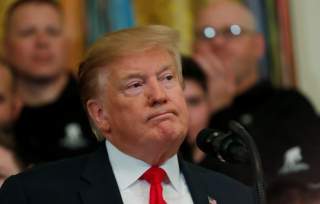 The president is trumpeting to his supporters and anyone else who will listen that, as he insisted all along, the Mueller report found NO COLLUSION (his all caps, not mine) with Russia. In addition, he is asserting, on the shaky basis of what actually is considerable ambiguity in the report, that there was “no obstruction” either. In fact, the report made it clear that the president certainly came near the line when it came to obstruction, and may well have crossed it. Nevertheless, Robert Mueller and his team punted on this issue, concluding that there was not enough evidence to prove that case definitively and leaving it to the Congress to act on what were clearly efforts by the president to halt the investigation.

Donald Trump himself realized he was in trouble. One of the more memorable quotes in the Mueller report has the president saying “Oh, my God. This is terrible. This is the end of my presidency. I’m fucked.” Even if he may have overreacted—he is still president after all—Trump’s instincts were not far off the mark. He could well be prosecuted once he leaves office—unless, that is, he is re-elected in 2020.

Perhaps that is why Trump launched his campaign for the 2020 election virtually the day after he was sworn in on January 20, 2017. He recognized even then that he was vulnerable to prosecution. His solution, therefore, was to launch a permanent election campaign. Should Trump win the 2020 election and take office for the second time in 2021, he would be nearly seventy-nine when he left the presidency. At that point, it would be highly unlikely that either a federal or state prosecutor would attempt to indict and convict an aging, two-term ex-president. For Trump, therefore, a second term represents nothing less than a statute of limitations against any prosecution arising from the findings of the Mueller report.

Nevertheless, even if the report did not find Trump guilty of collusion, and even if its authors were unable to justify a case for obstruction, what it did offer was confirmation that this president has demeaned the office he holds. And in so doing he has demeaned the United States.

There is no denying that in the past two years an increasing number of countries, including some of America’s closest allies, have taken a more independent stance on the world stage, distancing themselves ever so subtly from Washington’s policies. The European Union is attempting to implement a Special Purpose Vehicle to work around American financial sanctions on Iran. Germany is planning to go ahead with the Nordstream II pipeline from Russia. The signers of the Trans-Pacific Partnership (TPP) are moving forward with that agreement despite the Trump administration’s decision to withdraw from TPP. Turkey is poised to acquire the S-400 air defense system from Russia despite American objections and the increasing likelihood that Washington will not go ahead with the sale of F-35 fighter aircraft to that country.

The Gulf States continue to be at odds among themselves despite American efforts at mediation. Qatar, on the one hand, and Saudi Arabia, the United Arab Emirates, Bahrain and several other Arab states, including Egypt and Jordan, remain at loggerheads. North Korea’s nuclear weapons and missile development programs both proceed apace, Washington’s threats and/or blandishments notwithstanding. Russia continues to occupy Crimea, prop up the breakaway Ukrainian districts of Donetsk and Luhansk, and support Bashar al-Assad’s efforts to complete the crushing of the insurrection that at one point seemed poised to dethrone him. And Iran continues to intensify its increasingly successful efforts to penetrate the governing apparatus of Iraq.

Trump does have good relations with several leaders including Vladimir Putin, Kim Jong-un, Rodrigo Duterte, Mohammed bin Salman, and Bibi Netanyahu. But these actual or would-be autocrats are a distinct minority. The world is taking ever less notice of Washington’s concerns and priorities. And the blame for this vitiating of American influence must be placed at Donald Trump’s doorstep. The Mueller report has simply confirmed what was evident to anyone who paid attention to the president’s behavior during the first two years of his presidency. It takes only two words to sum it up: conduct unbecoming. And barring a highly unlikely presidential change of character, America’s prestige and influence on the international stage will continue to suffer as a result.