No Deal With China Is the Best Deal for America 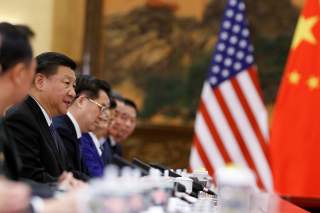 Vice President Mike Pence, in a stinging interview aboard Air Force Two on November 13, chastised China and rebutted critics of Trump policy. In doing so, he staked out a position not up to now heard in post–Eisenhower Washington.

Pence, as summarized by the Washington Post, said this: “If China wants to avoid an all-out cold war with the United States and its partners, it must fundamentally change its behavior.”

Almost nobody seems to think Beijing, under the direction of ruler Xi Jinping, is prepared to do that, at least in the immediate future. The pessimism, of course, is making prominent American observers nervous.

Take Hank Paulson. In widely quoted remarks on November 7 at the Bloomberg New Economy Forum in Singapore, the seventy-fourth secretary of the Treasury warned of “an Economic Iron Curtain” descending on the world as the American and Chinese economies continued a process of “decoupling.”

And the decoupling will have severe consequences. “I simply cannot see how the international system can endure when the two countries that comprise some 40 percent of global GDP and over 50 percent of global growth are working at cross purposes, attempting to de-integrate their two economies, and contesting the foundations of a rules-based order at every turn,” Paulson said. “If the U.S. and China cannot find a way to develop a workable consensus, it will pose a systemic risk of monumental proportions—not just to the global economy, as I dealt with, but to international order as we know it and to world peace.”

Accordingly, Paulson has a recommendation for the Trump administration: “Negotiate with China.”

Negotiate? Just because the stakes are so high does not mean “a workable consensus,” as Paulson put it, is possible.

At first glance, compromise looks possible. Both Xi and his vice president, Wang Qishan, have recently signaled they want to talk to the United States, and Xi has reaffirmed Beijing’s commitment to “an open world economy.”

But do Xi and Wang really mean what they say? “Unfortunately, we’ve heard this from Beijing literally hundreds of times before,” writes Dan DiMicco on the MarketWatch site on Wednesday. “And nothing ever changes.” The title of his piece says it all: “China Always Promises to Stop Cheating on Trade, but Never Does.” Beijing cannot keep its trade promises these days.

Yet there is one more reason why negotiations, no matter how much they are needed, will be futile. The Chinese ruler, who obviously believes in state domination of the economy and markets, will not bargain away critical elements of his cherished vision of the “Chinese Dream.”

This obstinance is not only a matter of ideology. Xi has every institutional reason and incentive not to compromise. He has changed the Chinese political system so that only extreme views are acceptable.

To understand why, we need to remember that the trade conversation in Beijing political circles for some months has centered around one question, “Who lost America?” That individual would, of course, be Xi.

Losing America would not be a political liability for him if America is forced to accede to China. If America does not accede, however, Xi’s many adversaries—some of whom also qualify as “enemies”—will come out of the woodwork and challenge him.

As “absolute” ruler, Xi has made himself responsible for everything that goes right or wrong. And if things go wrong for him, he could lose everything. Xi, as he seized power during his six years at the top of the Chinese political system, has deinstitutionalized the Communist Party.

In the era dominated by Mao Zedong, there were few rules guiding Party politics, something evident in the decade-long Cultural Revolution. Deng Xiaoping, who grabbed power from Mao’s chosen successor, began a long process of establishing rules, norms, and guidelines.

Xi has reversed this progress, something especially evident early this year when he was able to engineer the abolition of the term limit for the country’s presidency. He obviously wants absolute power.

A figure of such ambition at home, who does not like compromising with other political elements, is not one who can easily compromise with another strong-willed figure like Donald Trump.

And that brings us back to Vice President Pence. In remarks to the Washington Post, he did not close off negotiation with Beijing—Trump is scheduled to talk to Xi on the sidelines of the G-20 in Buenos Aires, which begins at the end of November—but Pence is staking out a hardline position.

And that is the right position for the United States to take. For China to honor any agreement, it needs to believe it has no choice but to do so.

How does the United States make Xi think he has no such choice? Pence has an answer.

The vice president this week told China in no uncertain terms that it must dismantle its economic—and political—system. “Authoritarianism and aggression have no place in the Indo-Pacific,” he declared in Tokyo. Pence understands that Xi’s new brand of authoritarianism means agreements with China cannot work. That is a novel concept for America’s policymakers.

Pence’s uncompromising stance may convince Chinese leaders of the seriousness of American resolve, that Trump is fully prepared to come after them. That perception, in reality, is the first step in convincing Xi that he cannot sustain a long-term contest with a determined Washington.

Such a departure from the let’s-make-a-deal mentality, which has dominated American thinking from Nixon onward, will make many people, including Paulson, unhappy—but it very well may intimidate the Chinese.

At this moment, therefore, no deal with China will be the best deal for America.