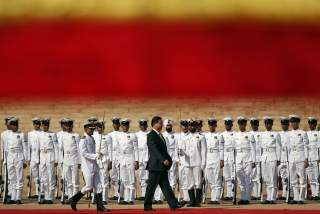 As we all see, the situation in the South China Sea is cooling down, and the biggest variable is the emerging Sino-U.S. maritime strategic competition. There have been three major views, all of which stem from anxiety, in the western strategic sphere recently on this issue, namely, the so-called Chinese expansionism, U.S. fecklessness and China’s control of the South China Sea with at the cost of others’ interests. That would contribute to much of China-lashing rhetoric these days. In my observation, all the above points are biased to some degree.

Secondly, when we talk about sea power and sea control in our current times, it just means relative influence and comparative advantage in some maritime areas, because today’ sea power is definitely an inclusive system rather than exclusive one. With China’s rise, it is increasingly difficult for the United States to impose the Mahan doctrine on China in the South China Sea; and no matter how far China develops, it is not likely to pursue so called “maritime hegemony,” given United States’ powerful forces in and around the South China Sea. After a long term competition, both sides will finally find out that there is no choice but to establish a common and inclusive security order with ASEAN Member States and other stakeholders.

China’s policy and operations is far from expansionism in the South China Sea. For a long time, China has adopted a policy of responding rather than moving first. From 2009 to 2014, China had mainly been responding to the aggressive policies and operations of Vietnam and the Philippines; since 2015, China has been mainly responding to the United States’ increasingly provocative moves such as more frequent and intense FONOPs, close reconnaissance and wargame exercises. It’s natural that China’s power presence and military capacity are being improved when China is powerful, and as the largest South China Sea littoral state, China does have the right to have a powerful presence in the South China Sea.

China has frequently been accused for “aggressive assault on the freedom of the seas” by some Western media, but neither Western officials nor their experts can show any specific evidence. Actually, except for some pirate threats, there is no problem with the freedom of navigation in the South China Sea. The passing Merchant ship insurance premium keeps at a low and stable price, which shows the openness and freedom of the South China Sea. Despite rising encounter incidents of warships and aircrafts between China and other countries like the United States, up to now, there is no exact evidence that China has obstructed freedom of navigation. It should be pointed out that some of these incidents have nothing to do with freedom of navigation: they happened only because of U.S. provocative actions such like FONOPs, close reconnaissance and excessive wargames. Even when coping with the above mentioned aggressive operations, Chinese forces exercised restraint, which is sometimes praised as professional by the U.S. forces.

As to the disputes in the South China Sea, China has always insisted on shelving disputes. Since the 1990s, China has kept continuous dialogue and negotiation with most of the claimants, signed the DOC with ASEAN Member States in 2002 and accelerated the negotiation of COC aiming to build an regional order based on consensus by regional countries.

It is unfair to blame the U.S. fecklessness of addressing China’s challenge in the South China Sea. In fact, the United States has almost made every effort except war both under Obama and Trump administrations. The former has taken a comprehensive strategy including military, economic, diplomacy and international legal efforts, while the latter emphasizes on military means in the shortage of diplomatic resources. As a superpower with worldwide responsibilities and tasks, the United States could not be counted on to put all the resources to the South China Sea. Nowadays, the South China Sea mission area has already consumed nearly half of resources of U.S. forward forces in the Western Pacific, which is approaching a maximum.

The foremost American problem is not that it has not done enough, but that it has done too much in the South China Sea. The U.S. officials and experts are always criticizing China’s militarization in the South China Sea, but never mention the increasing radical actions of U.S. forces there. Every year, the U.S. military would carry out hundreds of military exercises and thousands of close reconnaissance missions in the South China Sea. Since May 2017, U.S. warships have entered twelve nautical miles of islands and reefs stationed by China more than ten times already, conducting a series of provocations like high-speed zigzag and electronic jamming, which poses a huge threat to the sovereignty and security of China and Chinese people on these islands and reefs.

The United States’ excessive involvement in the South China Sea has forced China to deploy more defensive equipment there, and made more and more Chinese people realize the hypocrisy of the United States. Frankly speaking, should there not been the U.S. intervention, China would not have the need to take above-mentioned countermeasures .

Hu Bo is the executive director of Research Center for Maritime Strategy and the senior researcher at the Institute of Ocean Research, Peking University. His areas of specialization include maritime strategy, international security and China’s diplomacy. He has written three books and more than thirty journal articles and book chapters on China’s maritime strategies and policies. His most recent representative publication is China’s Sea power in Post Mahan Era (Beijing, Ocean Press, 2018).