Normalizing Ties with Cuba: A Step Closer to the Death of the Castro Regime? 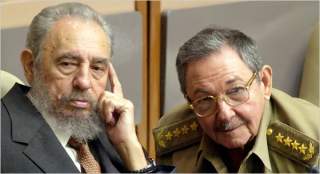 The Obama administration hasn’t had much foreign-policy luck with the big issues: Islamic terrorism, Russian subversion of Ukraine, growing Chinese assertiveness, peace between Israel and the Palestinians. The jury is still out on Iran. President Barack Obama has made his greatest progress with two small countries, Burma and Cuba, by liberalizing relations.

The exchange of Alan Gross, a U.S. contractor, and an American spy for three Cuban spies offered obvious humanitarian benefits. There’s always a danger in including someone like Gross in such an exchange, since it creates an incentive for other governments to set up innocent Americans for arrest to use as bargaining chips. But it’s still a net positive.

The more significant step announced by the president was to drop what he called today’s “outdated approach” to U.S.-Cuban relations which “has failed to advance our interests.” His objective will be to expand travel and trade with Cuba and reopen the U.S. embassy in Havana.

Cuba seems prepared to reciprocate. President Raul Castro expressed his thanks to President Obama as well as Pope Francis, who apparently supported the reconciliation process. While it would seem to be a no-brainer for Havana to back normalization, some have speculated that the regime preferred to maintain sanctions as an excuse for its economic failure. Castro at least seems willing to risk the uncertainties that greater contact will create.

Of course, the administration’s plan has generated complaints from hardline Cuban-Americans and Republican uber-hawks. Representing both camps, Florida Sen. Marco Rubio denounced the policy as “absurd,” another example of “coddling dictators and tyrants,” and “giving away unilateral concessions . . . in exchange for nothing.”

Notably, Rubio substituted rhetoric for argument. He apparently realized he couldn’t make a practical case for maintaining sanctions, or that sanctions would ever achieve their purported end. After all, Washington initiated unilateral economic war against Havana a half-century ago.

The Castros had created a nasty dictatorship, but they allied, during the Cold War, with the Soviet Union. During the Cuban missile crisis they operated as an advanced base for the U.S.S.R. But the Soviet Union, Cold War, Soviet-Cuban alliance and Moscow subsidies for Cuba are all gone. And not due to the embargo. In contrast, the Castro dictatorship lives on. Despite the embargo.

Over the years, the rest of the world ignored Washington, trading with and investing in Cuba. But Congress steadily tightened the embargo, roughly two decades ago targeting U.S. subsidiaries and even foreign firms, since the rest of the world did business with Cuba. Even on top of the cut-off of Soviet transfers, the sanctions did not bring Havana to heel.

While the two countries closed their embassies, they did not fully sever relations. The two countries maintain “interest sections” in each other. But it’s an extraordinarily isolated existence in Havana for a very small staff with limited ability to deal with Cuban officials or citizens.

Despite hopes for change from the current administration, President Obama only loosened regulations on Cuban-Americans that his predecessor had tightened, as well as relaxed controls over telecommunications between America and Cuba. Then-UN Ambassador Susan Rice insisted that the embargo would remain until Cuba was free.

But now real change is coming.

The administration’s plan is to begin discussions over reestablishing an embassy and conducting “high-level exchanges and visits between our two governments.” Regulations would be changed to encourage more travel and remittances, particularly by Cuban-Americans. But the changes would reach more broadly, such as expanding licensed travel to Cuba (a decade ago I went legally with a group of journalists). The administration also intends to expand allowable exports to Cuba, including agriculture and construction, as well as “for use by private sector Cuban entrepreneurs.” Travelers could bring in more goods, banks would be allowed to finance authorized transactions and efforts would be made “to increase Cubans’ access to communications.” The administration will review the designation of Cuba as a State Sponsor of Terrorism. Finally, the president reaffirmed his commitment to support democracy and human rights in Cuba.

Normalization is long overdue. There’s no longer a security argument for isolating Cuba. It’s irrelevant to America, the region and certainly the world. Havana threatens no one. The embargo is not stopping it from attacking or destabilizing anyone.

At home, the Castros are thugs, but that’s old news and hasn’t been affected by a half-century of sanctions. What we know as a result of essentially a controlled experiment with the embargo is that sanctions do not release political prisoners, generate competitive elections, unseat dictators, create a free press or foster a market economy.

Thirty years into the embargo, supporters thought their moment finally had arrived with the collapse of the U.S.S.R. In 1994, the Heritage Foundation’s John Sweeney declared: “Maintaining the embargo will help end the Castro regime more quickly.” Indeed, the latter’s collapse is “more likely in the near term than ever before.”

Another two decades have gone by and the Castro regime’s collapse looks as distant as ever. Surely today everyone can agree that sanctions have failed to have any positive impact.

Indeed, Washington’s policy of isolation has given the Castros an excuse for their failure. When I visited Cuba, I met Elizardo Sanchez Santa Cruz, who spent years in Castro’s prisons. Yet he criticized U.S. sanctions, which gave “the government a good alibi to justify the failure of the totalitarian model in Cuba."

Nor does isolation make any sense as a symbolic statement. There have been and remain plenty of worse regimes in the world. Acting like they don’t exist doesn’t make them go away. Refusing to acknowledge them puts the onus for problems on the United States. Targeting them builds them up as an apparent threat to the globe’s superpower.

Indeed, U.S. policy essentially made Fidel Castro. Had Washington come to treat his regime as a gnat to be brushed off, he would have receded in global importance, just another windbag dictator in charge of a poor, small state. Instead, for decades he was seen as the premier opponent of Yanqui Imperialism, an important figure on the global stage.

Of course, it’s important not to overstate the benefits of normalization. Cuba is not only poor, but also suffers from the ravages of a state-controlled economy. Cubans are limited in what they can buy and also in what they can produce to sell. However, Washington should not offer “aid,” whether for commercial or developmental reasons, to Havana in response.

Moreover, while greater economic and political contact will be naturally seditious and undermine Communist Party rule, the regime has carefully controlled past foreign investment, limiting its impact. But foreign visitors and businessmen still will have a positive influence. Of course, much more will still need to be done to encourage a freer society.

President Obama will face strong opposition, especially from the reflexive hawks who dominate the GOP congressional caucus. But Republicans would attack him anyway on anything he did. And he can afford to act, since he won’t face the electorate again and doesn’t need to carry Florida, with its concentration of Cuban-Americans.

Even most Republicans today recognize that the embargo has failed. Over the years, a number have challenged commercial or travel restrictions, or both. Even some in leadership see plainly. Although he turned more hawkish as his ambitions expanded, Rep. Paul Ryan previously voted to lift sanctions and admitted: “The embargo doesn’t work.”

The Cuban people deserve far better than what the Castros have delivered. Ultimately, their Communist dictatorship will end up in the legendary dustbin of history. But not yet, unfortunately.

Normalizing both economic and diplomatic relations with Havana should be seen as a victory not for the Castro government, but for the people of Cuba. Liberty will come to that land. The only question is when. Expanding relations should help speed up the process.