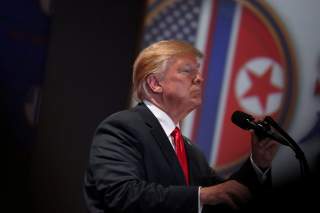 Last fall Washington and Pyongyang were exchanging insults and threats, with the two nations sliding toward military confrontation. A little over two months ago echoes of “Peace in our Time” rang out in Singapore as President Donald Trump and Supreme Leader Kim Jong-un staged a friendly summit.

Today, to the cheer of neoconservative who prefer war to compromise and Democrats who care only about discrediting the president, relations between the two countries appear to be rolling backward. Military confrontation again is a possibility.

Which demonstrates that the biggest problem with President Trump’s diplomatic style is not that it is unorthodox. His willingness to meet with Kim violated conventional wisdom but offered a chance for a breakthrough. With the Democratic People’s Republic of Korea otherwise guaranteed to create a growing nuclear arsenal capable of hitting the American homeland—at least if the United States is unwilling to strike militarily, which would start a Second Korean War—unorthodox diplomacy probably offered the only hope for success.

The chief challenge facing the president is ignorance. He almost certainly knows nothing about North Korea’s history, leadership, objectives, and interests. Even specialists disagree about these issues. Is Kim following family destiny and unalterably determined to conquer South Korea? Or is he a pragmatic if brutal ruler, determined to simultaneously preserve his rule and strengthen his nation? I lean toward the latter but understand the former claim. President Trump, probably not.

This appears to have given rise to President Trump's belief that after receiving a strong handshake and few verbal assurances, the DPRK leader was prepared to give up his nuclear weapons. No need to spell out the specific security guarantees and economic benefits in return. Kim agreed to toss caution to the wind, abandon weapons developed at great expense and woven into the country's political fabric, sacrifice all his leverage for nothing, and place his trust in an American administration with a somewhat casual view of living up to national commitments.   Sure.

In fact, few Korea specialists believed the North was prepared to yield its nukes. They offer prestige, are useful as a tool of extortion, and cement the military's support for the regime. They also ensure that Kim and his cohorts won't end up like Libyan leader Muammar Al Gaddafi. After all, Gaddafi gave up his nuclear and missile programs only to end up starring in a gruesome YouTube video in which rebels found and executed him. Therefore, while Kim could reasonably make a deal on the margin—halt missile and nuclear testing, cap the number of weapons, allow some forms of safeguards/inspections, adopt other tension-reducing measures—getting rid of everything was a long-shot under the best of circumstances.

Still, the possibility was there. But if so, it then behooved the president and his aides to pay attention to what Kim actually agreed to. Contrary to the claims of National Security Adviser John Bolton and others, there is no evidence that Kim agreed to speedily hand over his nuclear arsenal on the basis of trust, expecting nothing in return until he had placed his country naked at America’s feet. That certainly doesn’t fit his governing style, which is tinged with more than a little paranoia.

What did Kim accept? As has been oft-noted, the United States and DPRK always have had a different definition of nuclear disarmament. However, this difference should come as no surprise, given the two nations' respective security situations. The two governments look at the issue quite differently. American policymakers mean CVID, i.e., complete, verifiable, and irreversible denuclearization. Pyongyang, however, faces overwhelming U.S. power in the South and beyond the peninsula. The ultimate result might be CVID, but not likely without something more from America.

Moreover, the summit communique set forth what looks to be a logical process for disarmament. That is, the two leaders committed to forge a bilateral relationship, then establish a peace regime, and then achieve denuclearization. Cynics—and the DPRK's past behavior naturally gives rise to cynicism—might view such as process as a nefarious North Korean plan to slow and ultimately thwart denuclearization. However, this strategy makes a lot of sense if you are a small, vulnerable nation facing the global superpower which routinely, even enthusiastically, imposes regime change here, there, and everywhere on its initiative while being accountable to no one.

Kim knows that verbal guarantees and paper guarantees will not stop American military power. For North Korea to give up its main deterrent to U.S. military action, however unlikely that might be, is an obvious risk. How to overcome Pyongyang's natural reluctance? Create trust, which is most likely to come out of creating a deeper bilateral relationship and peace framework for the peninsula. That is if U.S. officials are busy meeting their North Korean counterparts and the president and Kim are sitting down to sign a peace treaty before the world, it seems a bit less likely that Washington will start launching air strikes on the North. If I was Kim, I still wouldn't trust American policymakers, but perhaps events would convince him to move forward with denuclearization.

Alas, so far Washington has given the North Koreans little reason to move forward. Of course, America should not give up everything before getting anything. However, the only realistic strategy is to exchange advantage for advantage.

Kim’s initial direct benefits have been small: a suspension of military exercises and more respectful diplomatic treatment. Beyond that, there have apparently been broken promises. Alex Ward of Vox reported that the president promised to sign an agreement ending the Korean War, which would be a significant symbolic affirmation that what Pyongyang calls America’s “hostile policy” was over. Failing to act raises trust issues and suggests that the administration, or at least important members of it, are not prepared to change course. “It makes sense why the North Koreans are angry,” an unnamed administration source told Ward: “having Trump promise a peace declaration and then moving the goalposts and making it conditional would be seen as the U.S. reneging on its commitments.”

The North could be play-acting, of course. Many observers snicker at the idea of gaining the North's trust. I am one of many analysts who would still be saying that denuclearization was unlikely even as the last DPRK nuke was being turned over for destruction. However, if there is any chance of negotiating away the North's nuclear arsenal, then convincing Kim that he won't be betrayed, as undoubtedly Gaddafi believed himself to be, is critical. And so far the Trump administration appears to lack not only a strategy but any interest in increasing the North's trust. This ensures that the current effort will be a massive waste of time.

North Korean policy is inevitably a comparison of second-best strategies. The Korean people, both in the North and South, deserve to live together in peace, ruled by a democratic government which safeguards their welfare and safety. However, the DPRK is a reality that cannot be wished away. Nor can it be swept away even by a military as powerful as that of America without devastating cost. And maintaining the peace is the foundation upon which everything else depends.

President Trump was right to try to jump-start negotiations with North Korea. He needs to continue the process that he has started. Which means moving forward to improve bilateral negotiations and reduce tensions on the peninsula. These are steps worth taking even if denuclearization proves to be a pipedream.

And maybe, just maybe, the president can prove we Korea cynics to be wrong. It’s an effort worth making.