North Korea Is Not Trump's Biggest Problem in Asia 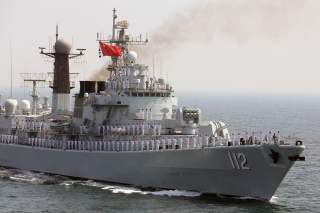 Against the backdrop of strategic fatalism in the South China Sea, with some claimant states openly embracing graceful accommodation with China, the United States has sent an unmistakable message of resolve to preserve freedom of navigation and overflight in international waters. The Scarborough Shoal, a tiny rock formation in the South China Sea, is fast emerging as a major flashpoint between the world’s two greatest powers.

Earlier this month, the U.S. Navy (USN) deployed guided missile destroyer USS Hopper within twelve nautical miles of the contested shoal, which has been under China’s jurisdictional control since 2012. This was arguably the most powerful expression of American commitment against further Chinese revanchism in the world’s most important sea line of communications (SLOCs).

In response, Beijing accused Washington of violating its supposed “sovereignty” over the shoal. Shortly after, a fiery commentary on Chinese Communist Party’s official newspaper, People’s Daily, tried to cite America’s latest Freedom of Navigation Operation (FONOP) as a pretext for full militarization of Chinese-claimed land features in the area. The FONOPs are specifically measured to challenge Beijing’s unlawful and excessive claims in the South China Sea.

“Against this backdrop of peace and cooperation, a U.S. ship wantonly provoking trouble is single-minded to the point of recklessness,” warned the People’s Daily commentary. “If the relevant party once more makes trouble out of nothing and causes tensions, then it will only cause China to reach this conclusion: in order to earnestly protect peace in the South China Sea, China must strengthen and speed up the building of its abilities there,” the article continued.

In his first year in office rising tensions in the Korean Peninsula largely consumed President Donald Trump’s bandwidth. In exchange for China’s assistance on North Korea, many regional experts contend, the American president seemingly dialed down criticism of and confrontation with China in the South China Sea. Realities on the ground, however, are catching up with Trump.

As President Donald Trump enters his second year in office, the South China Sea seems to be returning to the top of his administration’s agenda. This is partly driven by the fact that China has pushed the envelope over the past year, reclaiming an additional 290,000 square meters and deploying increasingly sophisticated military assets to its artificially created land features in the area. As the Korean Peninsula topped Washington’s strategic priorities, China relished its strategic impunity in other crucial theatres.

On the other hand, an empowered Pentagon seems to be increasingly successful in convincing the Trump administration not to drop the ball in the area. In recent days, Defense Secretary James Mattis also visited key Southeast Asian countries, Vietnam and Indonesia, in hopes of rallying regional states against China's maritime ambitions.

The Scarborough Shoal lies within the 200 nautical mile Exclusive Economic Zone of the Philippines, which claims the land feature as part of its national territory. Manila posits that it has exercised continuous and effective sovereignty over the land feature over the past century, first as a Spanish and American colony and later as an independent country.

Throughout the Cold War years, the Philippines gave Americans permission to conduct naval drills near the shoal. China coercively occupied the land feature after a months-long naval standoff with the Philippines in 2012.

In 2016, an arbitration body at The Hague, constituted under the aegis of the United Nations Convention on the Law of the Sea (UNCLOS), ruled the shoal as a “common fishing ground” for adjacent states. It censured China for forcibly preventing Filipino fishermen from accessing the rich marine resources in the area.

The United States has long maintained official neutrality on sovereignty disputes in the area, and has repeatedly refused to clarify whether it would come to the Philippines’ (a treaty ally) assistance in an event of conflict with China over disputed land features. Under President Rodrigo Duterte, the Philippines has also tried to distance itself from Washington amid an ongoing rapprochement with China.

In fact, in response to America’s FONOP in the Scarborough Shoal, Duterte’s left-leaning presidential spokesman Harry Roque dismissively said, "We do not wish to be part of a US-China intramural…The United States can take care of its own interest."

Nonetheless, the Pentagon is deeply worried about the prospect of Chinese reclamation on and militarization of the disputed land feature.

The Scarborough Shoal lies just above 100 nautical miles from Subic and Clark bases, which have served as crucial nodes in America’s project of naval prowess in Western Pacific and East Asia. The shoal is last missing piece in the planned strategic triangle (aside from the Spratlys and Paracels) of a Chinese sprawling network of airbases and military facilities in the South China Sea.

The Philippines’ defense establishment has also made it clear that China’s full occupation of the shoal, and installation of weapons systems there, is “unacceptable.” Defense Secretary Delfin Lorenzana, who has openly expressed skepticism towards China, defended America’s FONOPs as exercise in “innocent passage” by the USN.

The Pentagon clearly views China’s maritime assertiveness as the most important challenge to American primacy in Asia. In its newly released National Defense Strategy (NDS), the Pentagon openly described Beijing as a “strategic competitor”, which is “using predatory economics to intimidate its neighbors while militarizing features in the South China Sea.”

The document accuses Beijing of “seek[ing] Indo-Pacific regional hegemony in the near-term and displacement of the United States to achieve global preeminence in the future.” Under the Trump administration, great power rivalry is fast becoming a national security priority. The South China Sea will increasingly reflect this new and dangerous dynamic.

And many smaller Southeast Asian countries, which fear China, are more than glad to quietly welcome an invigorated America that pursues peace through strength in the South China Sea.