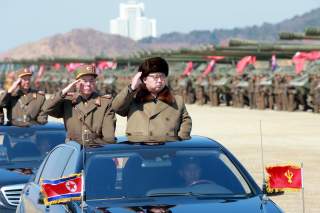 In a recent interview with Jon Scott of Fox News, National Security Advisor John Bolton argued that the United States should take preventive military action against North Korea to eliminate its nuclear weapons program. While this viewpoint has generated many opposition pieces outlining the massive death toll that would result from such a conflict, one of Bolton’s arguments in favor of preventive war is particularly deserving of greater consideration. According to Bolton, “It’s not simply the threat of what North Korea would do with its own nuclear weapons. It’s the threat they would sell those weapons to others, to Iran, to Al Qaeda, to other would be nuclear powers. That is a real danger that I don’t think people have taken enough account of.”

Bolton’s concern is not entirely unfounded. North Korea exports an estimated $100 million worth of arms annually, assisted Syria in the development of their fledgling nuclear program in the early 2000s, and it maintains relations with many nations that have traditionally been hostile towards the United States. Should North Korea sell nuclear weapons to actors with the intent and capability to use them, the resulting death toll may be high enough to justify the risks associated with preventive strikes. However, North Korea has little to gain and much to lose from the prospect of selling its nuclear materials, which, combined with the lack of probable buyers, makes it extremely unlikely that North Korea would consider dispersing nuclear materials to other states or non-state actors. Concerns over North Korea taking such an action serve as a poor justification for preventive military action designed to eliminate the North Korean nuclear program.

The argument that North Korea would currently be interested in selling its hard-earned nuclear materials to the highest bidder relies on a fundamental misunderstanding of the goals behind its nuclear program. The Kim regime has long considered itself at risk for deposition by foreign actors such as South Korea and the United States, a perception heightened by the presence of twenty-three thousand American military personnel in South Korea and the thirty-nine thousand American troops located six hundred miles east of Pyongyang in Japan. North Korea is arguably the most isolated nation in the world with few meaningful alliances to speak of, and even states that provide them with a modicum of support, such as China and Russia, would likely be content to see the Kim dynasty collapse if not for the chaos that such a destabilizing event would bring to the region.

The North Korean nuclear program exists as a remedy to this precarious security situation. North Korea wagers that the United States, South Korea, and Japan are all unwilling to risk conflict with Pyongyang, knowing that escalation could result in their population centers or military assets being targeted by nuclear weapons. Furthermore, the presence of nuclear weapons on the Korean Peninsula serves as a massive deterrent towards any attempts at regime change by the United States or any of North Korea’s neighbors, who would fear Kim Jong-un’s capacity to use nuclear weapons in a last-ditch effort to retain his stranglehold on political power. The primary goal of the Kim regime has always been to preserve its rule even at the expense of the interests of the North Korean people, and nuclear weapons serve as the Kim family’s ultimate insurance policy.

Should North Korea attempt to sell its nuclear materials to the highest bidder, it would greatly undermine the high level of regime security that Kim Jong-un has achieved. While the United States has largely pursued a strategy of deterrence towards North Korea coupled with occasional diplomatic overtures towards denuclearization, efforts by the Kim regime to sell nuclear weapons to any actor hostile towards the United States would be met with universal condemnation and swift retaliation. Such actions would clearly signal the failure of America’s containment and deterrence efforts, and would likely result in an American-led, multilateral military response designed to destroy North Korea’s nuclear capabilities and depose Kim. North Korea’s nuclear program exists to reduce the likelihood of an American attack, and Kim Jong-un would not risk losing power or having his nuclear program threatened by acting in a manner that would necessitate such a response.

China’s reaction to North Korean nuclear sales would also be one of significant concern to Kim. China has long tolerated the North Korean nuclear program as a necessary evil to prevent American domination of the Korean Peninsula, as well as a preferable alternative to instability and regime collapse in North Korea that could result in civil war and refugee crises on China’s southern border. However, China’s broader aim is to increase its power and influence in East Asia, which ultimately involves supplanting America’s regional influence and either subjugating its neighbors or increasing their reliance on China for protection.

North Korean nuclear-arms sales greatly undermine both components of China’s goal. Not only would America substantially increase its military presence in Korea and Japan to address the growing threat of a nuclear arms dealer, but China would also fear that North Korea could export nuclear materials to other East Asian nations, which could severely curb China’s potential for influence and dominance in the region. North Korea, which has long relied on the diplomatic and economic benefits provided to them by China, can ill-afford to risk alienating their begrudging protector, and would prioritize maintaining this essential relationship over the short-term financial gain associated with nuclear arms sales.

To further complicate matters, North Korea would have difficulty finding a credible buyer of its nuclear materials. Iran, which froze its pursuit of nuclear weapons in accordance with the Joint Comprehensive Plan of Action, is unlikely to reverse course and actively pursue such materials, and would prioritize continuing its economic recovery over jeopardizing the agreement to purchase from North Korea what it could likely develop on its own. Syria has made no move to restart its nuclear program since its fledgling reactor was destroyed by the Israelis in 2007. Other Middle Eastern nations have either shown a willingness to cooperate with the west in developing nuclear programs exclusively for civilian use, as is the case with the United Arab Emirates, or have advocated for the creation of a Nuclear-Weapon-Free-Zone in the region, such as Egypt and Jordan.

A more commonly accepted fear involves North Korea selling nuclear materials to terrorist groups such as Al Qaeda or the Islamic State, but this scenario is equally improbable. Not only does North Korea have few meaningful transactional ties to organized terrorism, but it is unclear that any existing extremist groups have the necessary capital to afford the purchase and transfer of such materials. Such a transfer would also be ripe with danger, as nuclear materials could easily be detected by radiation sensors or intercepted by American intelligence agencies, which have demonstrated an improved capacity to prevent such sales in recent years. Finally, the level of scientific expertise and infrastructure necessary to produce a dirty bomb, execute an attack, or even properly maintain an existing nuclear weapon, far exceeds anything that Al Qaeda or ISIS have shown themselves capable of achieving, which would serve as a significant deterrent to any group considering purchasing such materials.

Finally, it is unclear what if anything North Korea would gain from selling its nuclear materials. Contrary to popular depiction, Kim Jong-un is not a madman determined to cause chaos for the sake of chaos, but a rational actor who is deeply concerned with his own self-preservation. The most likely incentive for North Korea to engage in such sales would be a financial one, but it is difficult to imagine a scenario in which North Korea could create a market for nuclear materials large or consistent enough to risk alienating their biggest economic partner in China. Additionally, many of North Korea’s previous nuclear sales were designed to accelerate their own nuclear development, such as an exchange in which Pakistan, “would advise and guide them with the centrifuge program and that the North Koreans would help Pakistan in fitting the nuclear warhead into the Ghauri missile.” Given the advanced state of North Korea’s nuclear program, any previously-held interest in the exchange of nuclear materials could no longer be justified by Pyongyang when evaluated through a rational cost-benefit analysis.

Advocates for preventive war to address the threat of nuclear arms sales on the Korean Peninsula would likely respond to these objections by contending that North Korea does not need to sell radioactive material to contribute to nuclear proliferation. Instead, it can export the technical knowledge necessary to develop nuclear weapons. Despite being an accurate assessment, there seems to be little that preventive war, or any policy for that matter, could do to better address such a concern, save for killing every North Korean scientist affiliated with the nuclear program and ensuring the destruction of all documents related to its development. Any motivated country can learn how to produce a nuclear weapon from one of the thousands of nuclear physicists around the globe, but as many countries who have struggled to successfully develop such a program have learned, the economic and political costs of attempting this feat often outweigh the benefits gained from a nuclear weapons program. The threat of North Korean nuclear secrets being sold certainly warrants vigilant efforts on the part of the United States to address it, but it seems very unlikely that preventive military action could realistically eliminate such a concern.