Not Just Gas: Why Europe Is Reluctant to Follow the U.S. on Ukraine 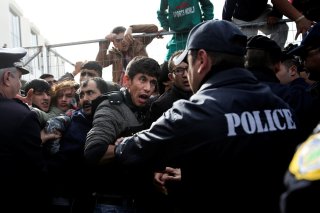 As Ukraine faces a possible Russian invasion, the specter of yet another refugee crisis looms over Europe. Apart from the heavy economic costs, an all-out war in Ukraine would hurl millions of refugees westward, forcing the EU frontier states of Poland, Hungary, Slovakia, and perhaps Romania to bear the brunt of the humanitarian crisis to follow. The United States should keep this in mind when it makes demands of its European allies regarding Ukraine.

In recent weeks, key NATO allies in Europe were reluctant to rally behind the United States’ hardline “no concessions to Vladimir Putin” stance on Ukraine. Germany, Europe’s leading economy, tried to stay neutral for a while, with Chancellor Olaf Scholz only adopting tougher language after a high-profile visit to the White House last Monday. Even then, he was still reluctant to say that the Nord Stream II gas pipeline connecting Germany and Russia—Putin’s pet project recently greenlighted by President Joe Biden, in a reversal of Donald Trump’s sanctions—would not go forward if Ukraine was invaded. Simultaneously, French president Emmanuel Macron scrambled to hammer out a deal for de-escalation on an independent track, only to be humiliated later by Putin’s spokesperson, Dmitry Peskov, who pointed out that France is not the leader of NATO.

Eventually, Germany, France, and Poland united behind a shared goal: to preserve peace through the readiness to act together in the event of a Russian invasion—essentially converging on the initial U.S. position. Economic interdependence and diverging attitudes regarding Russian natural gas have been identified as the main reason for Europe’s initial reluctance to engage with Putin on terms dictated by United States. Obviously, EU countries have much more to lose than the United States if Putin invades, triggering Biden’s sanctions from hell and subsequent Russian countersanctions. Then there is the issue of refugees who would attempt to flee the war by crossing into the EU.

This would not be the first time Europe is rocked by waves of asylum-seekers as collateral damage from Western foreign policy. The 2003 invasion of Iraq was one of the key factors that led to the destabilization of the Middle-East and enabled Al Qaeda, and later ISIS, to expand in the country. The protracted civil war in Syria—where the United States intervened without a clear strategy—ultimately led to the 2015 refugee-migration crisis that saw hundreds of thousands of asylum-seekers make their way to Europe. Apart from the astronomical financial costs and the incalculable societal burden of hosting more than one million refugees, the EU has also been sending massive aid to Turkey as part of a deal to prevent asylum seekers from continuing their journey en masse to the continent. The price tag on the project between 2016 and 2024 is going to exceed $10 billion, with no end in sight.

As the EU was still reeling from the consequences of the Syrian crisis, the hasty American withdrawal from Afghanistan, and Afghanistan’s ensuing economic collapse—only made worse by draconian sanctions—also tossed a ticking refugee time-bomb into Europe’s lap. The New York Times recently reported that one million Afghans have already fled the country with thousands more trying to cross into Iran every day. Anxiety in Europe is growing that the onset of milder weather could bring a massive wave of Afghan refugees. The EU already pledged more than $1 billion in aid last autumn. So far, Iran has been cracking down on irregular border crossers, and Turkey has scrambled to erect a wall on its eastern border. There is no telling, however, what’s going to happen if the two countries’ authorities get overwhelmed and abandon their enforcement efforts. How many billions of European taxpayers’ money would it take to shore up these two key transit countries?

And now the sword of Damocles of a possible Ukrainian refugee crisis also hangs over Europe. This time, however, there would be no transit countries to bribe, no gatekeeper nations outside of Europe. The Polish government recently announced that they are taking steps to receive up to one million refugees in an event of war. However, it is doubtful that Poland has the institutional capacity to manage a sudden deluge of hundreds of thousands of Ukrainians fleeing the Russian invasion without extensive help from other European nations.

Kristóf György Veres is a senior researcher at the Migration Research Institute in Budapest, and an Andrássy Fellow at the Center for Immigration Studies in Washington, DC.

Image: An Afghan migrant shouts at a police officer as refugees and migrants, most of them Afghans, argue with police as they block the entrance of the refugee camp at the disused Hellenikon airport, in Athens, Greece, February 6, 2017. Reuters.